THANK YOU!
$1
per month
Join
Truly, every little bit helps, and as far as I'm concerned you're more of a saint than Wee Aquinas for pitching in. Also, I'd love to hear from you. What would you like to see Space-Biff! do in the future? What new jokes can we tell about Geoff? How many Eurogames should we play in the coming year? Giving a dollar lets you give me the answer to all these questions and more!
YOU'RE TWICE AS COOL!
$2
per month
Join
I mean, it's math.
REAL HUMAN BEING!
$5
per month
Join
And a real hero. Seriously. That song rocks, and so do you.

My grandfather was a writer. He wrote list books — 1,001 Reasons Why, that sort of thing. They were terribly dry, but composed with the same gentle steadiness that marked the rest of his life.

Space-Biff! is about me being like my grandfather. Except with a much greater appreciation for board games, minus the dryness and obsession with lists, and hopefully fostering the sort of place that strangers will want to visit every day. 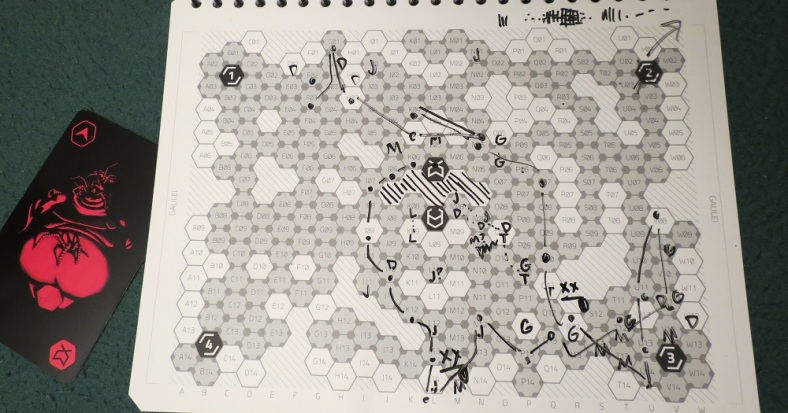 On a far less personal note, Space-Biff! is about fulfilling two goals. The first probably won’t surprise you. I have always had a deep preference for written reviews. With a written review, you’re allowed to read as quickly or slowly as you like. You’re allowed to return to a paragraph and ponder whether you agree or disagree with the author. You’re allowed to marvel at the way a phrase captures a particular moment or mechanism. A written review is both more deliberate and more briskly consumed than a video review or podcast. Not that it’s necessarily better. But a carefully worded essay has a place alongside every other form of criticism, if only because it can express, in the most measured and distilled manner, the reviewer’s experience with a game.

And that, by the way, is what I believe a good review is all about: expressing a reviewer’s experience. If I were more creative, I might figure out a way to work two more Xs into that sentence so I could claim it as a 4X game. Expertly expressing a review’s existential experience. There. This blurb is now functionally Clash of Cultures II. It’s amazing what an internet search can help us accomplish, isn’t it?

To express my experiences with a game, and to do so with insight, clarity, and hopefully some value to my readers, whether they’re looking for a purchase recommendation, hoping to figure out why a particular game bugs them, or seeking a deeper appreciation for a title with a hundred logged plays under their belt — that’s the first goal of Space-Biff!

The second is to remain independent. I have never been averse to freelance work, and dabbled here and there. However, most of the industry’s larger spaces are driven by the need to generate as many clicks as possible while prompting as little controversy as possible. Most article lengths are capped at around a thousand words and content is often carefully monitored to appeal to a broad demographic. It’s simple business: give your readers a reason to migrate through multiple pages without giving them a reason to stay away.

Space-Biff! isn’t about that. While I pride myself on not wasting my readers’ time, I also pride myself on knowing when a game warrants 500 words and when it warrants 5,000 — though I don’t believe the site has ever featured anything quite that long, so please come back from the door. Sometimes a game will require a tough discussion, whether because of a sticky system or because it wants to engage with a serious topic. Sometimes a small independent game will be the best game of the year, while the big-box release that saturated the internet with flashy ads and earned a million dollars on Kickstarter won’t be worth a tin of old lima beans. On Space-Biff!, I have the freedom to tell you precisely what I think, beholden to neither advertisers nor editors-in-chief.

As an example of what I’m going for, take a look at Best Week. This is my version of an end-of-year list. Rather than highlighting the ten best games of the year, I look at multiple categories and genres. In 2017, for instance, the games I chose to highlight included a visually ugly negotiation game named Sidereal Confluence, the weirdest social deduction game of all time in Bemused, the children’s dexterity game Rhino Hero Super Battle, the light card-matching game Ethnos, the second edition of the solo game Nemo’s War, a socially conscious cooperative game called Spirit Island, and a wargame, Time of Crisis, that reduced one of Rome’s toughest centuries into a sublime deck-building game.

The process of crafting an insightful written review requires more than just sitting at a keyboard and clacking out some impressions. It takes preparation, multiple plays of a game, a heavy dose of discussion, and a whole lot of showers gone cold because I’ve spent too long thinking about how to write an introduction rather than washing my hair. When reviewing a wargame, I often have to read a book! Sometimes two books! This is always enlightening, but can also eat up plenty of time.

This is why I’ve turned to Patreon. While writing board game reviews is enjoyable, it’s also not the sort of pursuit that keeps the furnace running. My goal isn’t to make a living from this, but to make it more worthwhile and hopefully expand the quantity, quality, and style of work that I’m able to offer to you, the reader. I’d like to add a monthly editorial and eventually bring back the Space-Biff! Space-Cast!, the world’s premier (but shortest-lived) podcast about the deeper meaning of board games. Right now, neither of those things are possible. But with your assistance, there’s no reason why they couldn’t be!

In short, with your help, I hope to not only continue writing Space-Biff! for a long time to come, but also shape it into something greater than it already is.