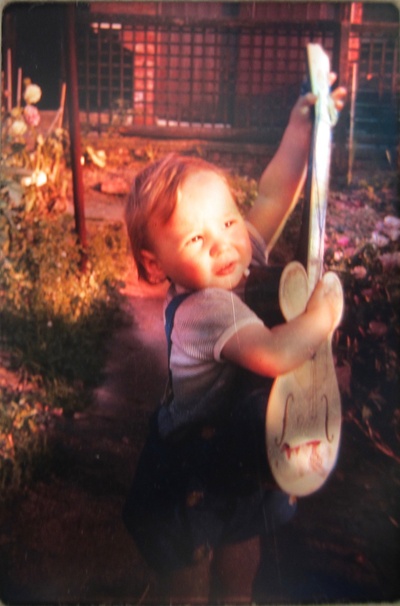 $6
per month
Join
My Mickey Mouse Guitar was my most prized possession when I was aged 2, so this is definitely not a 'Mickey Mouse' amount in my eyes and your generous support is extremely highly valued!
Includes Discord benefits

$11.50
per month
Join
My red Watkins Rapier 33 guitar was my first electric guitar, which was bought for me by my dad when I was 14. It was my only electric guitar right up until my last few months at music college, so was as crucial to my early development as a guitarist as your amazing generosity is now to my continued development as a composer.
Includes Discord benefits 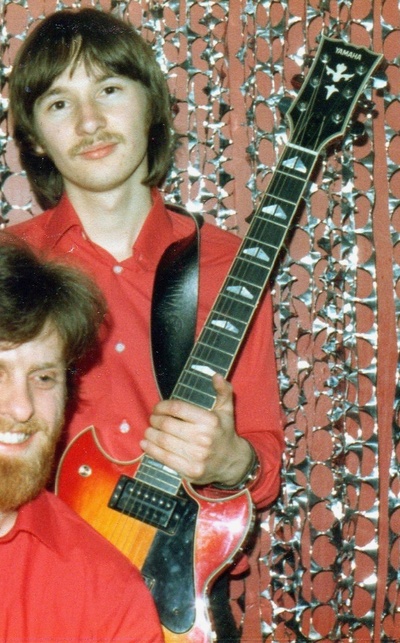 $27.50
per month
Join
This was my first serious professional guitar, a fantastic instrument with a big, chunky sound, which I bought with my inheritance money when I was 20, about a year before this photo was taken. I still have it and have used it on many recordings and gigs, including the first Iona album and most recently on a track on Lifesign's Altitude album. 'Wow' was my reaction when I first played it, and 'wow' is my reaction now to your wonderful support as we journey together on this new adventure!
Includes Discord benefits

Welcome to my Patreon page! I’ve been considering creating this space for a couple of years and now that I have, I’m thrilled that you’ve found it. Most of you will know me as co-founder of the band IONA (www.iona.uk.com), from my solo albums, or recent work with Strawbs, Lifesigns or Downes Braide Association (with Geoff Downes of The Buggles/Yes/Asia and Chris Braide producer/writer fo Beyonce/Lana Del Ray/Sia/Britney Spears etc). I've played keyboards and guitars with many other artists and also work as a composer (solo albums and film soundtracks), producer and mixer. I was recently voted 3rd in the Prog Magazine Best Guitarist of 2021 Reader's Poll. You can find out more on my website: www.davebainbridgemusic.com

WHY PATREON?
In a nutshell, at this stage in my life I really want to be able to spend more time writing and releasing more of my own music, which means finding the means to be able to do that. I also want to establish a direct connection with you, the people who support my work, creating a supportive community who can interact and encourage one another, with the shared love of the music being our focus. I’d like to get your direct feedback and involve you where possible in the creative process. Patreon allows artists to focus on their work, rather than how many people it will appeal to. Sadly today a lot of art - no matter how brilliantly executed - is not commercially viable. Through Patreon, artists don’t have to waste time and money trying to appeal to everyone, but they can turn to their patrons, their niche, directly and hopefully see organic growth from this solid base.

WHAT WILL THE MONEY GO TOWARD?
In the beginning, the money will go towards helping paying the bills in order to allow me to devote more time to writing and recording, updating studio equipment, paying the musicians and tech people I collaborate with, the rewards for the different tiers etc. However, if this thing really takes off, there are so many more things I would love to do! Tour in places where it is difficult due to the high costs, record a second solo piano album, but this time in a studio I’ve found that has an incredible £120,000 Fazioli grand piano, commission creative and artistic videos to accompany the music, release my solo albums on vinyl, perform my and Iona’s music in some of the historic locations that first inspired it, make the ultimate Celtic Prog album with my friend Troy…the sky could be the limit!

CAN I STOP DONATING IN THE FUTURE IF I CAN'T AFFORD IT?
Yes of course! You can cancel or adjust your pledge amount for any reason at any time.

WHAT IF I WANT TO SUPPORT MORE THAN THE HIGHEST TIER, OR GIVE A ONE OFF DONATION?
That would of course be incredibly and unbelievably generous! Currently Patreon’s model doesn’t include the ability for one off donations, so message me and we’ll see what we can work out!!

MY STORY SO FAR, VERY BRIEFLY!!!
Ever since I was old enough to walk I’ve been surrounded by and fascinated by music. I loved my first guitar, with pictures of Mickey Mouse on it. After a few years of piano lessons, I started writing my own compositions and since then I’ve always felt most fulfilled writing, playing and recording my own music, which I feel is what I was born to do. It’s not always been an easy road. Even though I’d played with many famous artists of the day whilst still in my 20’s, including Jack Bruce, Buddy Guy, Gloria Gaynor, Paul Jones, Phil Keaggy and many others, I was longing to release an album of my own music. I started writing a few tunes and making a plan. This was long before the days of the internet and digital downloads. I drew up a list of about 100 friends and figured that if they each bought a copy (on cassette!), I should be able to cover the costs of the recording!

As it turned out my destiny lay elsewhere, my solo project idea morphed into collaboration with my good friend David Fitzgerald and Irish singer Joanne Hogg, and with input from both it expanded into the first album of our new project: IONA. Within 6 months IONA’s debut album had sold 10,000 copies! Iona became the main outlet for my compositions up until the band’s last studio album, 2011’s 'Another Realm'. The band carried on for another 4 years, coming to a natural conclusion in 2015. We had sold hundreds of thousands of albums and toured around the world, touching many people’s lives.

As with any band, the magic comes from the combination of all those involved, so everyone has to be prepared to compromise to some extent for the good of the whole. So I still had dreams of writing music that didn’t have to be approved by other people and that I had total artistic control over. The opportunity to record and release my first solo album ‘Veil of Gossamer’ came in 2003, when Joanne requested a sabbatical from the band. With a small record company budget I was able to realise my dream.

It took almost a decade before I was able to record and release my second solo album. In the subsequent years, the music industry had changed radically and I’d had to concentrate on projects that earned me a living, as well as devoting a lot of time to working with my autistic son Luca on an intensive home-based program called ‘Son-Rise’. With the rise of crowdfunding platforms I saw a way to fund my next solo release, that would become ‘Celestial Fire’. The Indiegogo campaign for the album in 2013 raised an incredible £20,000, thanks to 650 amazing supporters, and enabled me to realise another dream.

Since then I have fulfilled new dreams, including recording my first solo piano album ‘The Remembering’ (in 2016) and my latest solo album ‘To The Far Away’ (released in November 2021), the recording of both of which were self funded. Despite the huge challenges facing those in the creative industries today thanks to the pandemic, Brexit, closing venues and many other factors, I am determined to carry on and write and release more albums under my own name. In a way I've come full circle since those early dreams of releasing that first solo album on cassette and once again am hoping for the support of an amazing group of friends (you lot!), to fulfill future adventures. I hope you will join me on this new and exciting chapter of the journey.

65 of 100 patrons
When I reach 100 patrons, I'll be able to free up 2 full days a week to concentrate on writing my next solo album, and will celebrate by playing a 90 minute solo concert exclusively for you, with one or two very special guests.
1 of 1