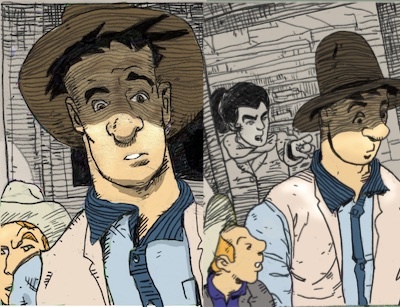 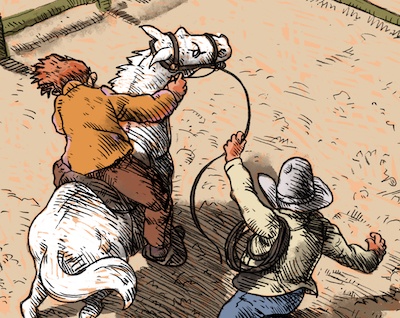 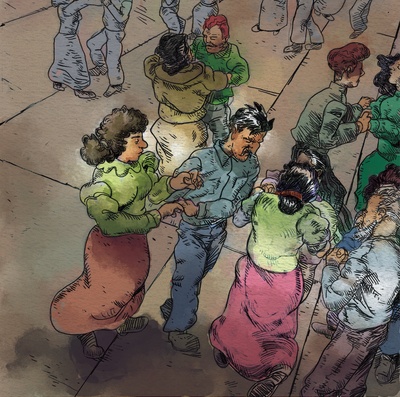 Rick wrote that in October of 2018, after I had gotten maybe ten pages of the beginning of my nine book series done in rough form. On January 1, 2020, the beginning of a significant event in the history of comics began. It has been in the making since August of 2018, when I drew this little thing in my sketchbook, mulling over something that had been written about me in The Comics Journal in 1985.

This is the first drawing I created of Blueboy Brown, a near-giant twelve-year old lumberjack, patterned after my father's uncle Benjamin. I mulled over the idea of using the name Benjamin, but F. Scott Fitzgerald wrote the Benjamin Button story, so I opted for Blueboy because I could use the idea that they both wore short pants to make a comparison between the opulence of the Gainsborough painting, and the fact that the first time I ever saw it was on the back of a deck of cards.

Now, for the rationale that this is history in the making.

Back in 1985, Dale Luciano wrote a small thing about me in The Comics Journal #101. In it, he said I was potentially "a major talent." This happened after I had left comics in the mid-70s. I was not a superhero artist, or someone who could ever work for a corporation, or even an editor. I have my own vision of how things are, and I have no desire to illustrate someone else's viewpoint. I'm a misfit in that way.

But in the mid-70s I was also not experienced enough at life to speak with any true voice about it. Even though in my major contribution to comics, Hobo Stories, I predicted, correctly, we were on our way to a state the Bill of Rights was written to thwart, I could not write poetically, with the kind of voice that is necessary to woo a reader into investing in my vision of things. I was too p.o.'d at the world and the way it was going to get a theatrical distance from it, so that I could fashion it in a lyrical way.

If you read What If? or I Return to Comics After 40 Years, you'll get a fuller idea of what I did to address this problem. I grew up. It's my thesis that growing up ain't easy, and certain things must occur, or one remains an adolescent. At 67, I hope I've done that. If one accepts my premise, then I have the foundation to do what I was not proficient at 40+ years ago. That, of course, is not for me to decide. The reader, and history, will make that decision. But I know what is in the works in Blueboy Brown. I've begun a nine book series that spans 150 years of one fictional family, the Browns. It's a trilogy of trilogies. The first three deal with Blueboy and his family, which is why its subtitle is The Adventures of a Family.

Succeeding generations follow, leading up to the present. The first and third trilogies are already written. In the draft of this post, I wrote a long section about the aims of the story, but I'm going to keep mum. That may come in time, in conversations held with Patreon supporters. That seems a reasonable thing to do.

I would ask people to read the stories. If they resonate with you, consider helping me devote myself to them full-time. They will begin their life online, as a perfect place to showcase my return to comics after 40 years of art and teaching in other veins. I have the domains locked up for years. I'm in good health, and have a work regimen that will enable me to accomplish my goal.
Blueboy Brown. The Adventures of a Family
Stay safe. Read comics.