$2.50
per month
Join
or save 11% if you pay annually
This is the daily coffee is consumed by rkn while working on Dogeminer and thinking of you. It also comes with all in-game bonuses (every tier does)!

Every dollar counts towards making a more, bigger, better wholesome game and so does every cup of coffee 💖 ... it's not an addiction, mom!

$5
per month
Join
or save 11% if you pay annually
Those $5 buys rkn a lot of coffee beans, these will greatly help rkn develop faster.

Steam Keys (2) are included in this tier, and of course in-game bonuses!

$7.50
per month
Join
or save 11% if you pay annually
rkn has issued this limited tier for those wanting to name a shibe in-game*.

Steam Keys (2) are included in this tier, and of course in-game bonuses!

rkn will use some of the coffee from this tier to get a name you pick into the "random name chooser" for all Mining Shibes that currently (and in the future) use names.

For this limited tier, in addition to the above, you get to choose a name for the Shibes that appear in-game when hired** (PG & SFW)

* The name-a-shibe benefit has been limited to the $20 tier, however after numerous requests, rkn decided to make this limited tier

** Name must make sense (numbers usually don't make sense), be suitable for young people (think PG-13 and SFW). Avoid breaking any sort of law or other big no-no's (if your name is not suitable, don't worry, you can pick another until it is^^). Much love!
Includes Discord benefits

Dogeminer 2: Back 2 The Moon™ is a wholesome and fun adventure, clicker, incremental game in development!

rkn is the creator and developer of the Dogeminer games. Most of the time he does all the work himself, sometimes he gets help from his good friends or community members. Recently, a very talented artist has started helping out with a lot of art, which helps a lot and will show in the quality of Dogeminer moving forward, rkn has personally also bought a lot of game development assets, that are all free to modify - primarily for Dogeminer games.

Working as a freelancing web developer, which takes a lot of time and energy, makes juggling between client projects and Dogeminer very difficult. The more pledges, the more rkn can focus on Dogeminer, creating content and implementing new features (there are so, so many amazing and fun ideas, plans and hopes)

The game can be played for free on the web, and if you pledge a small fee monthly, not only do you directly help to speed up development, you also get access to unique rewards ("VIP" discord chats & neat in-game bonuses). But wait, there's more! You also get access to the earliest release of Dogeminer 3 (!) for Steam on desktop - when it releases some time in 2021 (PS. Make sure to choose a tier with steam key(s) or you won't get a key).

The price point of Dogeminer 3 when it comes to Steam is not yet certain (rkn is thinking around $12-20, however this may yet change).


Did you know that "Dogeminer 2: Back 2 The Moon" is a remake of the original game, dubbed "Dogeminer - The Dogecoin Mining Simulator"? It has no connection story-wise!


The Steam version is going to be the primary version moving forward (after 1-2 content updates of the free version available on the web), and the plan is to release Dogeminer 3 to additional stores after the initial Steam release before pursuing a mobile app-edition.

This means new updates will almost only be available on Steam once launched. This enables rkn to release updates faster, add tons of achievements (!!!), use Steam's cloud saving (with multiple save slots!), and more.

With that said, further plans, apart from more and more content and features, is ever-changing and evolving, and rkn knows the Dogeminer community (especially on Discord, wow!) has an endless supply of ideas for the game, and he is saving every single one that has merit.

rkn knows mobile players are anticipating an app version, the mobile version will have to be re-designed before app release. It can be so much better than it is today (on the web / the old game on Android), it's also better to do this after the new version (3) is here, so that rkn can make the mobile app from the latest and greatest version of Dogeminer.

It might be interesting to know that a greater percentage goes to rkn via Patreon than Steam. Steam takes a 30% cut of all game sales, while Patreon has a 5% fee.

Illustrated roadmap for the Steam release: 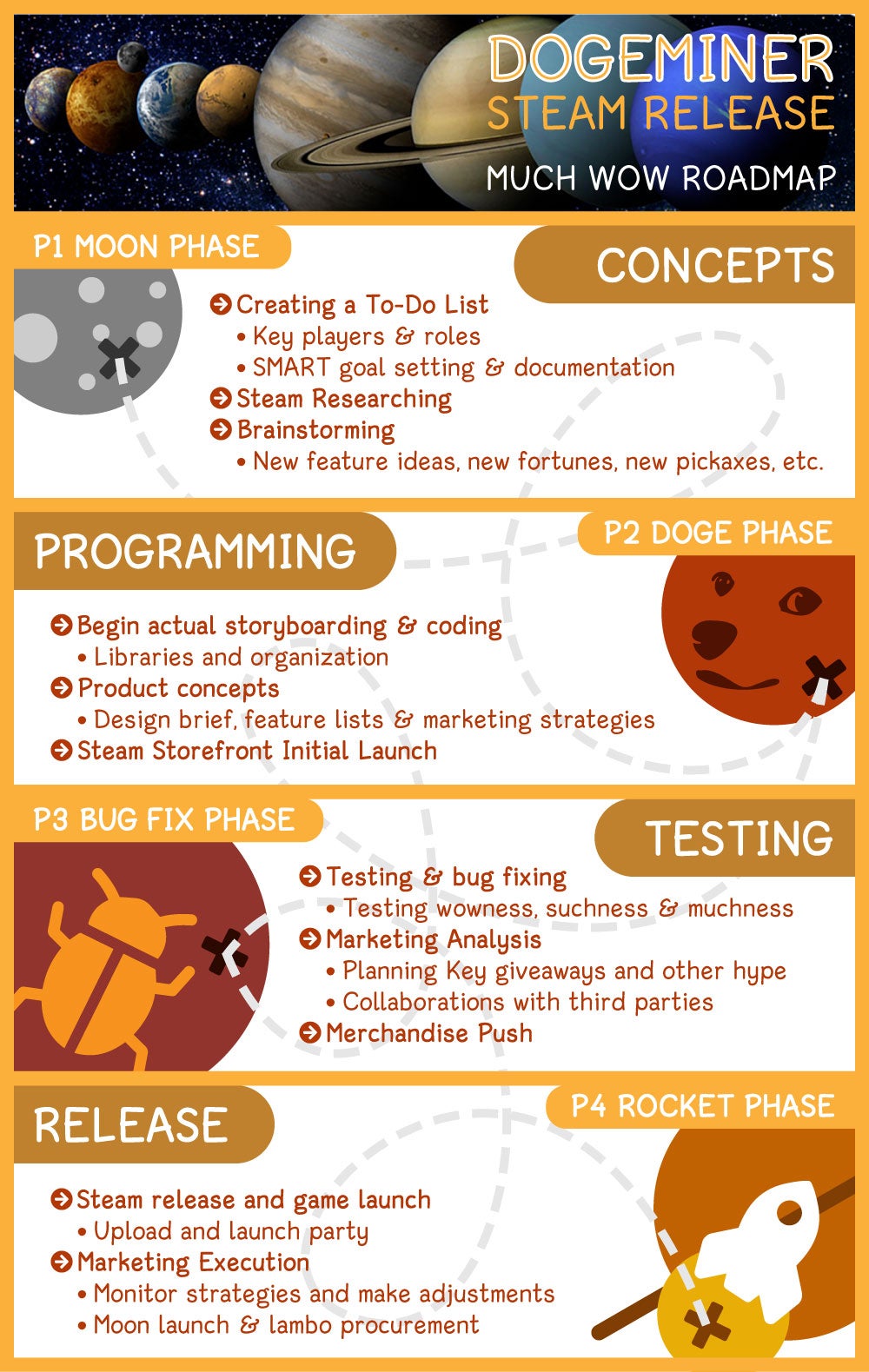 I've already paid for it - I needed to be approved before I could become a SteamWorks partner and setup a Steam page for the game (in the works) and I couldn't think of any good goals...