The Mad Doctors is creating content you must be 18+ to view. Are you 18 years of age or older?

About The Mad Doctors 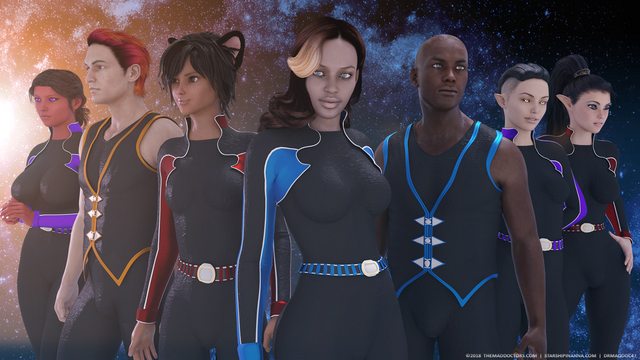 Thanks for your interest in The Mad Doctors.  Below you can find answers to some common questions.

What is the Starship Inanna game (not the tabletop or the short stories)?
Starship Inanna is a visual novel game being developed in the Ren'Py Visual Novel Engine. At its core it is a Choose Your Own Adventure style story set in a sci-fi universe akin to Star Trek or Mass Effect.

You take on the role of a Commander of the Titan Empire, who has just been assigned as second in command of the ISS Inanna under Captain Alexandra Zal. The crew of the ship is comprised of select races of the Empire which the player will be able to interact with and have relationships with (that means plenty of sex (if you want it)). There is much to discover as the Inanna begins her adventure to unknown parts of the galaxy.  As Commander you will be sent on missions to different planets where you will encounter new cultures and civilizations.  You will run across slavers, enemy races, omnipotent beings, and more.  The choices you make as the story unfolds will have consequences, some subtle and short term, others may take much longer to play out.

These are the current episodes:

How much are the final versions going to be?
All of our games will be freely available, however certain (non plot) related sex scenes will be time-locked to Patreon Backers, as will the Patreon Exclusive Gallery.  The main game and anything tied to the main characters is freely available.

How long is Starship Inanna?
The game is going to be under continuous development so there's no real way to tell how long it will be when it's finally done, episodes will be of varying length with some longer and some shorter.  Currently the first 8 episodes takes a few hours, more if you want to replay to unlock different scenes.

Does Starship Inanna have a character creator like Mass Effect did?
Given the game is entirely pre-rendered images, that would be very difficult to handle as every different ethnicity would mean much more work for every image.  I didn't plan for character creation at the beginning and it would be difficult to go back and add it in.  I made a choice early on to make the main character dark skinned (I was watching a lot of Star Trek Deep Space Nine at the time).  Race aside, you do get to choose your gender, your specialization, and through your choices, your sexuality.

What about your Fantasy Interactive Fiction?
That one does have a sort of character creator, the reader can choose between three races, three genders making for 9 main characters which will reflected in the art and the text.

Where can I get the latest release?  Do I need to be a Patreon backer to play?
The most recent public release of the Starship Inanna, as well as credits and other community/support links, are available at StarshipInanna.com.  The Fantasy RPG is not available at the moment, we will update the Patreon when it finally see's a release.

How many people are on the team?
The Mad Doctors comprise three people currently.

Is anyone else working with you?
Yes, we have a few friends and investors who do some play testing of the indev versions, Mrs. MadDoc works as a sounding board for the actual sci-fi side of the story.

Where does the money we pledge go?
Money generated from this Patreon will go support the development of Starship Inanna in the following ways

52% complete
More Staff, more content!  At this goal JamieH would move  from the tabletop game (and acting as a Narrative Consultant) over to the other projects, to help with editing past episodes and releases and writing future ones.  We'd also work on including short animations in Starship Inanna.
4 of 6

Recent posts by The Mad Doctors