DU Football Show is creating content you must be 18+ to view. Are you 18 years of age or older?

is creating a podcast about English Premier League football (soccer)

A warm and fuzzy feeling, the knowledge that at some point we clinked glasses in your honor, and access to "Soundcheck" the unfiltered and unedited "show" before the Show. 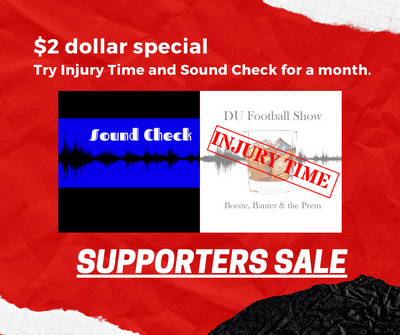 $2
per month
Join
FEBRUARY Special – for 2 bucks try out Soundcheck and Injury Time for a month.  Grab a shot of Malort and be our Drunk Uber passenger

Previous,  PLUS a DU sticker (everyone loves a sticker) and access to “Injury Time,”  which is an exclusive extra show at least twice a month.

DU Football Show is a completely biased recap of the English Premier Football League, as told by two common American schmucks. oh, and we drink during the podcast and will teach you a bit or two about good booze.

THE HOSTS
sam Huston was a goalkeeper for 25 years, so he’s been hit in the head a lot. Professionally he is an expert in the liquor business, but for fun he yells at men from the sidelines and calls it coaching. Huston has been an Everton fan for about ten years, so he shaves his head to look like Tim Howard. He is very much aware that he has a great voice, and he once played the Big Bopper in the musical Buddy Holly. Huston’s style is influenced by the DC area talk radio of the 90’s and early 2000’s. oh, and he was once a parade.

sam Graham has been playing soccer for 30 years and counting, but he’s been running his mouth for over 33 years. Professionally he is in the wine and spirits industry, but for fun, he lets Coach Huston yell at him once a week while he’s on the pitch. He might be getting “too old for this shit” but he still can’t resist the excitement of the game, and the thrill of a red card. Graham is an Arsenal supporter since ’02 and has the tattoos to prove it. He really knows his football, and has been preparing for this podcast through years of shit talking at pubs.