A Citizen of Morrighan 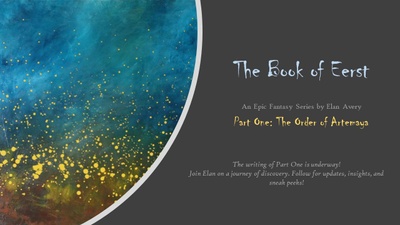 $5
per month
Join
Support the writing of the first book in The Book of Eerst Series: The Order of Artemaya!

By the constellations, you are a citizen of the archedom of Morrighan, land under the laws of the Parchate! With your brusque trill, hearty army, love of meat, and mythic history akin to Arthurian legend and Gaelic tradition, you appear to follow the blue laws but some disquiet in your demenor suggests that you may be organizing a rebellion. Join Learen Maratash and her motley crew as they journey toward Woodlander and the secret order that has sat dormant for centuries. 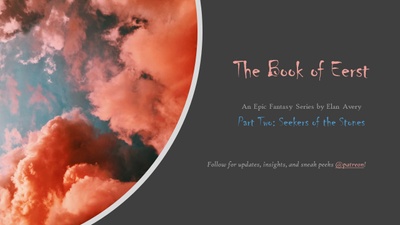 $7
per month
Join
Support the writing of the second book in the series The Book of Eerst: Seekers of the Stones!

Are you a waterbringer, firebringer, earthbringer, or something else? The ancient republic of Piracel is one of magick and mystery. Citizens of Piracel were once aligned with the light during the Reign of the Ranee but have fallen to the darkness in the Age of the Parchate. Island mythos prevail as the Sylphids A' Haka D'Oro and Ezura R'Ayba find their place in the Circle of Nine as the hunt begins for the Calling Stones of Eerst. Help to find the Eerstly power to rival the Wing and its Severance.

A Healer from Nadira 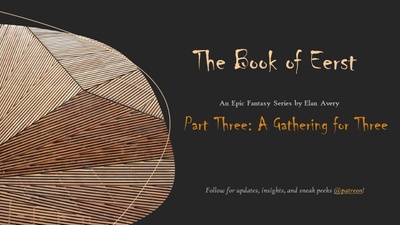 $9
per month
Join
Support the writing of the third book in The Book of Eerst Series: A Gathering for Three.

You are led by intuition toward something bigger. A healer, you embark into the unknown from an erudite land, armed with your best weapon: sacrifice. To make three, you need to round out the triple goddess conjunction with the energy of a holy healer. Follow Nikel Mere as he leads Crowne to a new era as the Third Pull mounts across Eerst. The three come into focus, with only three left to find in the Circle of Nine.

In my mind I have created the fictional world of Eerst and its story of the ultimate fantastical landscape and characters as they face the darkness. I would love your support helping me make space to write the epic fantasy series The Book of Eerst: a nine-book adventure of otherworldly proportion that draws from global mythos.

The writing of the first book in the series, The Order of Artemaya, is underway! Your support motivates me and brings me closer to manifesting this world for others to enjoy!

The Book of Eerst Overview

The Parchate Era is about to end as Eerst experiences its third and final Pull: a catastrophic energetic event that shifts the magnetism on the planet to cause inversion and spread fear. With each Pull Eerst has fallen deeper under shadow as ancient forces of darkness materialize. Starleng and her birdlike Severance seek to fade out the light and claim Eerst as their own, with the help of their converts. As the new age births a fresh Sever, champions of the light must fight for balance once again. Legendary powers and heroes return from ages past — the Bringers, Cziezen warriors, manifestations of the Triple Goddess and the Redeemer, Dreamwalkers, Dragonfae, and much more — to form the Circle of Nine and its Pentagram to stand in the light against the darkness.

The Order of Artemaya Overview

The people of Morrighan have experienced strange occurances, signalling the drawing of the third Pull. Although each archdom aligns with the Parchate, Pelloners ready their notorious military and tighten legislation after a female Cziezen is discovered after thousands of years of male Cziezen dominance. The Pinnacle issues a birthmark decree and a search begins for females with any of the five marks. Learen Maratash flees Pell with some new friends in search of safe harbor when she discovers that she is Peyta, a faction of curved spear weapon masters. A dangerous journey leads to the discovery of an underground order of female Cziezen ready to usher in a new era.