is creating Stories and Games in the World of Quirk!

Go Behind The Scenes 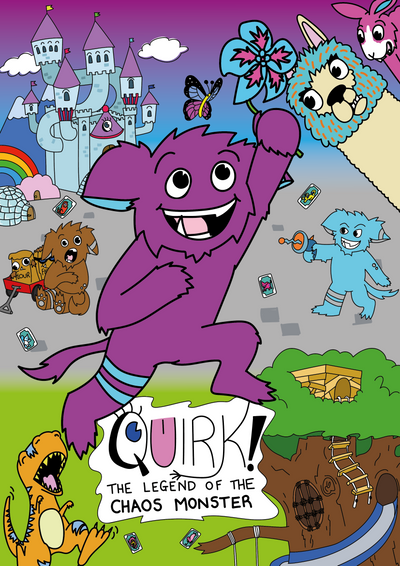 $7.50
per month
Join
Get the behind the scenes process as I create the Quirk! Graphic Novel including parts of the story before anyone else!

You'll also get to share your ideas about the Quirk! world which may influence the final production of the story.

Your name will also be mentioned in the credits.

About Emma May (Emmerse Studios)

Join me, Emma from Emmerse Studios, Creator of Quirk! the funny family card game, as I expand the world of Quirk! in illustration and storytelling. Follow the adventures of Mischief Monster in his 6 books series!

My current work includes creating comics for Instagram. Exclusively to Patreon, I am releasing my latest sketch ideas here, you'll get to pick which comic is created first before Instagram gets to see it or even suggest comic panels.

By supporting this channel, you'll get behind the scenes access to the creative process and be featured in the credits of my next project. You'll also be reason the Quirk! series gets to expand by supporting my work as an independent artist. Thank you!

Other ways to support my work:
Download Quirk! Digital Card Game for free on Android or iOS
Play Quirk! Gibsons Card Game
Read Mischief & the Tree
Read Emmerse Yourself: How to go it alone and break the mould

If you're new to my work: I am Emma May, I run Emmerse Studios as a solo independent artist, game designer and product developer. My first game Quirk! was developed in 2017 - a twist on go fish, where you act out characters to win cards from other players, then steal, block and stop your opponents to become the Quirkiest. It became a popular game, winning awards, becoming a best-seller and spawning two follow on games, Quirk! Legends and Quirk! Monsters. I sold over 11,000 copies in just over two years, retailing in Waterstones and 100's of other shops across the UK.

In 2019, I licensed the game to Gibsons where we internationalised the game and launched in June 2020 in the wake of the Pandemic. The Gibsons Quirk! is the version you can buy today and includes two copies of the game inside the box, now retailing in John Lewis and selected Waitrose stores in the UK.

The decision to license my game freed me up to create more aspects of the Quirk! world, I developed Mischief and the Tree, the first of a 6 series children's picture bookin 2020, focusing on viewing ourselves and the world around us in a positive way and Emmerse Yourself, the story of how I turned my own character designs into a popular card game and business lessons other creatives can benefit from.

My latest project in the Quirk! world is two-fold. In the beginning of 2021, I wrote a story called Quirk! The legend of the Chaos Monster, this is what my Patreon Channel is all about, I am developing the story into a graphic novel and need help and support along the way to keep the project financed to enable me to produce it. The story focuses on how Mischief becomes Mischief, it's set around Mischief and the Tree. You'll find out in this story why he finds the tree in the first place! Then once I have time to develop Mischief's short stories (children's picture books), these will be side spin offs of his time living in the his Treehouse, full of the lessons Mischief learns from the world around him.

Secondly, I produced the app game: Quirk! Digital Card Game, while this a digital version of the card game, made for single player. I have included within the app, hints to the larger story I have developed in the Quirk! World. The graphic novel will tie all the characters together!

Are you ready to start this adventure with me? Sign up to become a Patreon!

I can't wait to share with you the world we will build together!