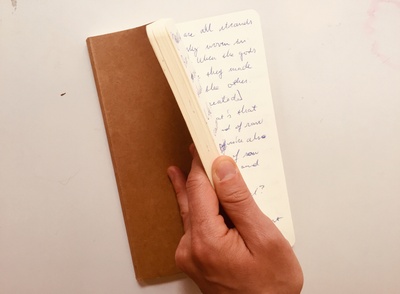 The only linear story in my diary will be time itself. An uncensored artistic process is messy, chaotic and raw - this is what I want you to experience.

More than anything, this diary is for me a way of looking for support. I believe in cooperation and doing things together and I want to break the image of the lonely artist, sitting in his room creating art by himself.

By sharing this material with you I wish to create a dialogue around how to create a life where caring and well being is put in the center. In my opinion, art can play a much bigger role in this sense.

Your money will be directly invested in sustaining and nurturing the creative process and moving forward with my current projects. I will be endlessly thankful for your support and I look forward to building a community together around a creative life.

Erik Sjøholm (FIN), born and raised in the land of a thousand lakes, is an independent, nomadic singer-songwriter & storyteller.

He’s an artist who travels around with a guitar on his back and a backpack full of stories, creating moments of connection between our inner world and each other, using music and stories as invisible bridges.

His performances and publications are like a bricolage, scattered images, that expresses our search and desire to belong and feel at home in our current rootless lives.

Who are we when our families and friends are spread out all over of the world?

Erik released his debut album “Walkabout” in 2016 and has released a multitude of singles, an Ep and a live album since. Every month he’s presenting a new story, a new song and reflection about his current experiences.

He plays an acoustic nylon stringed Spanish guitar and sings with a voice that has been compared with singers like Paul Simon, Jeff Buckley and Ed Sheeran.

As a storyteller, his style resembles artists like Nick Hennessey and Robin Block, mixing personal stories, myths, folktales with musical elements and creating narratives that float in and out of songs and stories.

Let's stand in great uncertainties together and touch the beauty in our everyday.

Become a patreon and join the band!