is creating Philosophy, Art, Angst
Select a membership level
$1
per month
Be the pocket change you want to see in my world... 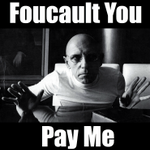 Select
$15
per month
You tell me who or what you'd like me to deconstruct, and I'll deconstruct it...

About Ethicist For Hire

Who Am I?
I have a philosophy phd, I've written a book, and I like to write, draw, and, in my spare time, I create commodities for fans of philosophy to fetishize. I also like to send sweet nothings into the ethereal realm known as Twitter.

Why Should You Become My Patron?
Apparently philosophy is not the high-paying gig that no one ever told me it was, so it's becoming harder and harder for me to be able to afford to carry on these extra-curricular activities.

One such activity that I need help with is turning this cartoon into the children's book that it demands to become.

So won't you help me turn philosophy into something productive, like a children's book, rather than something pointless, like another journal article?

Recent posts by Ethicist For Hire