$3
per month
Join
We will be creating new music beyond the tracks on our upcoming album.  Your contribution will go towards making these songs a reality!
You'll get a glimpse at lyrics and chord sheets and other nerdy details about how songs progress form the spark of an idea to a completed work.

$10
per month
Join
We will be inviting you to Zoom meetings where you'll get to not only be a digital fly on the wall, as we talk about songs in the works and discuss arrangements, but we will be asking  your opinion about ideas and directions for songs.  You'll get to hear occasional demo versions of songs and we will pick your brain about what you would like to see in the final product. 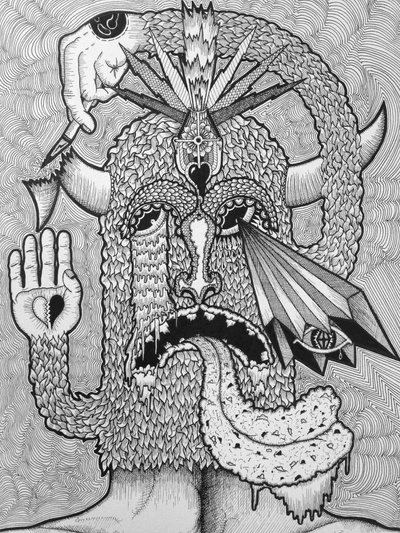 $15
per month
Join
This is where we are truly melding this account with an amazing artist.  If you are a fan of Zachary Davis Mory, then this is the level for you!  If you're new to his works, look no further than the cover portraits he has done for our Halloween song, 31 and our Christmas song, 25.

For this level, every two months Zach will mail you a 5x7 art print of one of his works.  You will also be getting access to our music as we release it.

Both the bands and Zach's hope is that we all expand our fanbase and everyone gets exposed to new music and new art!

$35
per month
Join
Every three months brand new artwork will be created by Zachary Davis Mory and put on some fabulous merchandise!  These pieces will only be available to those who back this level.  Zachary did the awesome portraits for out Halloween tune, "31" and he will be doing the album artwork as well.

It ain't cheap, but its exclusive. In an age where anyone can get anything almost any time, only you will be able to sport this band gear.

Note.  The image on the coffee mug is just a placeholder.  It will be brand new art created exclusively for Patreon.
You will get access to the band zoom meetings where you can give us input for song direction as well as artwork content for the merch you will be getting.
Exclusive Merch
Fulfilled by Patreon
Includes
Global shipping included

Limited (1 of 1 remaining)
$100
per month
Join
While the other pleebs will only be wearing the fabulous artwork on some crusty T-shirts, you will be the sole owner of the original.  Zachary will mail you the original once every three months and we will be cutting him in on our take!  So, not only do you get an original piece of art, you support the band and an artist.

Bless your heart.
P.S You also get access to the behind the scenes lyrics and Zoom meetings where we pick your brain

Its been an interesting journey for us.  For those of you that are already familiar with the band, you know that we put out our first and only album, "Only Ghosts Remain" back in 2009.  Life moved us all apart, but after an 11 year hiatus, we are back together making music.

We have reconnected, despite the miles between us and we are going stronger than ever before.  We are in the process of recording our crowdfunded album!

But there's more that we want to do beyond those songs.  We recently released a song for Halloween simply titled, "31"  and we have a few holiday songs in the works.  We hope to gain your support and continue to release new and interesting songs that build beyond our upcoming album.