You help make the show possible! Many thanks!

You work with the producers in putting it all together!

You'll be called out with thanks on social media upon becoming a patron. 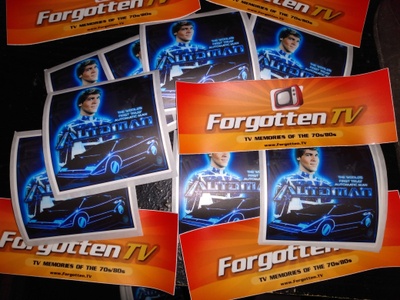 $5
per month
Join
You are the backbone of show production logistics.
Producers will receive credit at the end of each episode of Forgotten TV, will be called out with thanks on social media upon becoming a patron, and will be mailed a Forgotten TV sticker (type may vary) as well as a sticker commemorating a recent show topic to show your support for your favorite podcast.
Gain access to all supplemental podcasts and Patreon-only content posts that supplement the main show.

Chris Cooling produces Forgotten TV, the podcast that brings you TV memories of the 70s and 80s, with a focus on short-lived TV shows and made for TV movies. You may have also heard him on other shows like Stuck In The 80s, Forgotten Filmcast, The OSI Files, or Walnut Grovecast.

Forgotten TV can be a documentary style podcast on a particular TV series, or explore a theme such as 70s superheroes, Saturday morning TV, time travel, or the work of a particular actor. A significant amount of research is done for most episodes to bring you the most accurate information possible, and has uncovered new or very little known facts about the productions of some shows. Many shows are the result of 50-75 hours of work, or more.

Over the past four years, Forgotten TV has become a leading authority on obscure TV from the 70s/80s, earning compliments from entertainment industry professionals, including the producers of the shows covered. The FTV considerations of TV series like Whiz Kids, Automan, Tales of the Gold Monkey, James at 15, The Phoenix, and others are comprehensive and some have been called 'definitive documentaries' on these shows. Several of these podcasts have revealed never before heard details about behind the scenes production and even go beyond the DVD documentaries that have been produced. Upcoming podcasts are in the works to bring you information directly from TV show creators. Shows in the works include Angie, Street Hawk, V: The Series, The Immortal, Beyond Westworld, The Powers of Matthew Star, and more.

The podcast currently has no advertising and to be transparant, currently averages $7 a month in Amazon affiliate revenue. Your support is greatly appreciated and with it, I hope to bring you the podcast for years to come.

Your Forgotten TV host was raised on UHF reruns of shows like Star Trek and The Twilight Zone on a black and white 19 inch Admiral TV, long before the average household had home video and back when you had to catch shows when they were on. An utter TV and media nerd, I recorded TV theme songs on a Panasonic cassette recorder, had the ‘Television 1970-1980’ book, wrote my own episode guides to Battlestar Galactica, Greatest American Hero and Wonder Woman, as well as my own episode of The Twilight Zone and my first aired radio spot all in middle school. My first job was at a movie theater, where I was the 'voice of the theater' for several years, which led to doing the theater's radio spots and stints at a couple of local radio stations in the early 90s.

$52.55 of $75 per month
This goal level of $75 a month will partially cover the basic existing costs of producing Forgotten TV, which currently run $90 a month before factoring in any book or DVD purchases.


*I have invested in improving the production quality of the podcast with a Rodecaster Pro, Rode NT1 professional microphone, and Rode PodMic (each for different recording circumstances) which was only possible through financing. This also makes interviews by Skype or phone much easier to produce.

Thank you very much for supporting Forgotten TV.