is creating The Only Show on the Internet 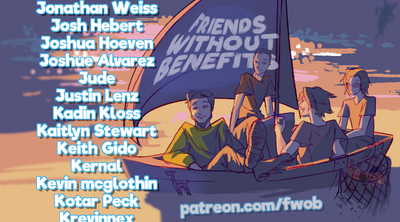 About Friends Without Benefits

Hello! Friends Without Benefits started out as just Alpharad and dad as heck. It became difficult for Alpharad to manage both his main channel and FWOB, since he was doing the editing for both. Months passed and then FWOB was reborn! Joining Alpharad and dad, Weegee, Major Duncan, and Deezus joined the team!

Some time went by, and Alpharad became very busy with his own content and decided to part ways with FWOB. Now, dad and Deezus have taken up responsibility and manage the channel, which is doing better than ever thanks to the loyal support by all of you!

With all the revenue that FWOB makes, we split it 25% / four different ways. We were looking for a way to give thanks to our fans that wish to pledge to us.

In our $4.20 tier we have an awesome discord server where the editors commonly post leaks to upcoming series, and sometimes host server smash lobbies/tournaments.

For our $10.69 tier whenever we mess up a recording or decide to not finish a series, rather than than trashing the footage, you guys will get access to it. This includes all previous posts in this tier which has surmounted to quite the impressive catalog of videos. Additionally, you get your name in the credits of every FWOB video as a thank you! The list of names that goes in the outro will be updated at the start of every month!

For our $25 tier you get access to all our videos early, which often means a link to a playlist of the entire series, posted the day that episode 1 goes live on our main channel. For newer games, or ones we have not yet finished, we will constantly update existing playlists every time we record more episodes! **THIS WILL RETURN** **NOW INCLUDES BONUS SATURDAY STREAMS (LIKE WATCHING ANIME WITH THE BOYS) ONLY AVAILABLE TO PATRONS OF THIS TIER OR HIGHER**

All money from this Patreon will be split amongst the boys and help us buy more games to play on the channel.

Thank you so much for reading this and thank you even more for anyone who decided to be a Patron. <3

P.S. If the discord integration does not work, hit up Deezus or Dad on Twitter, you will be responded to much quicker.

Recent posts by Friends Without Benefits