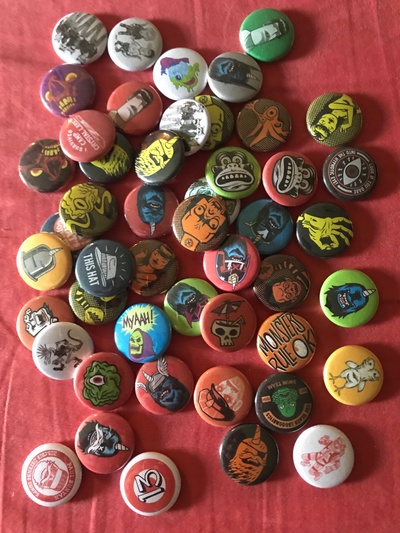 $5
per month
Join
I've made a BUNCH of buttons over the years & YOU GET A HANDFUL!  you won't know how many or which ones! everyone loves a surprise!
$10
per month
Join

Thank you for at very least LOOKING, and at most, participating by becoming a patron.

But let me introduce myself: My name is Andrew Bargeron, but Gimetzco! (Jim-Ets-Co!) is what i go by while creating fancy things like artwork. I make art for a living.

Since late 2014 i've co-hosted a podcast called VideoNight! for Retrorocket Entertainment. VideoNight! is a show that brings you, not the oddest, but odd, little seen, or forgotten films (among other things). Here's our home on the web: VIDEONIGHT!

I also host 3 other podcasts: WHAT DID WE JUST WATCH?!? And VINCENT PRICE'S LAUGH & Got Me A Movie. I record, edit and produce all of these podcasts (for VN, only the shows featuring the host Michael and myself).  WDIJW Has me and a guest discuss a really strange film that we had just watched, with intent to inspire you to or repulse you from watching said film. It's a short show, but usually fun. Both VPL & GMAM has my wife, Elbee and I discussing ooky spooky creepy genre flicks & other films we find worth our time...

Your pledge will feed me during those editing sessions and might help light that fire under my butt, so i can complete all of my other creative endeavors.

*The uploaded video is of a character named BIONIC! The song is by my sometimes 'band' STATION! (we have an album available here: STATION! for free or pay, whatever).