Grunt 1B Comics is creating content you must be 18+ to view. Are you 18 years of age or older?

A Tip In the Bucket 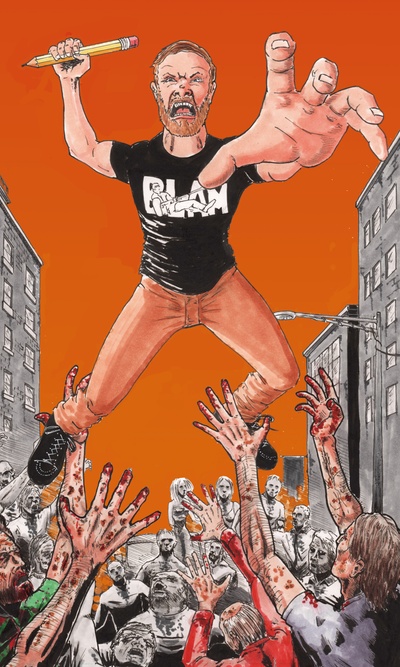 $1
per month
Join
Congratulations, you have unlocked all content! Thank you!

About Grunt 1B Comics

Howdy! I am Chad Cavanaugh, the man behind Grunt 1B Comics. I am a US Army Infantry veteran and former Sentinel at the Tomb of the Unknown Soldier in Arlington National Cemetery and now a creator-owned, indie comics writer/artist/publisher out of San Diego, California and I want to thank YOU for being a Patron! Because you decided to join our exclusive community, I can continue to bring alive the Grunt 1B Comics universe! So this means you're now BLAMily!
So far in the G1B Universe are the following awesome tales of terror, adventure, action, thrills and chills, sprinkled with some laughter here and there:

The Map:
A post global nuclear war tale of survival, set in the Four Corners area of the desert southwest. Follow, Bryan Woodworth, nerdy former geologist for the USGS and the least likely person to ever survive anything. Follow along as he is thrust into a nightmarish hellscpae and forced to become something he has never been... a survivor.

Radgod:
In a raw and ungodly violent world, where humanity is terrorized by a Troll/Giant/Humanoid race of cannibals known as the Jotnar, a small yet determined band of warriors teams up to attempt to fulfill the prophecy of the halfbreed who would take the Jotnar's throne, with his own two, bloodied hands.

Bedlam In Troubletown:
In a town crushed by the wealthy corrupt, one vigilante aims to take back what once was a thriving metropolis. Constantly on the run and always being hunted by an army of mercenary-like goons, he risks losing everything if he can't fulfill his mission. This crime noir is a fast paced thrill ride through the blood soaked alleys and streets of Troubletown. Buckle up, it's about to get deadly...

Dead Oro Live:
On the high plains of the old west, rides a slim silhouetted, smart mouthed, reckless drifter in search of a legendary cursed treasure. He believes finding the treasure will solve all the problems he put himself into by making bad business decisions. What he doesn't realize is, the cursed gold will open a Pandora's box that will make his current woes seem like a lazy mid day mosey on horseback. Supernatural action mixed with irreverent humor and some Dead Oro all who dive in...

All of these books can be found at grunt1bcomics.etsy.com.

I am currently working on the fifth series in the G1B universe. I will be uploading pages from previous series for all of my patrons to check out for all levels of donations! Thank you!

Recent posts by Grunt 1B Comics