You Have My Thanks

As the author and artist of Adventurers' Guild and the main benefactor of your pledge, I am very grateful for your support! You'll be able to see a few behind-the-scenes things, and sketches I do.

Gratitude of the Adventurers 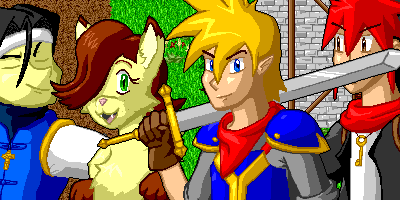 Not only the author but the characters are grateful for your support too! You now have access to extra art of the characters drawn just for the patrons on this tier. Thank you again! 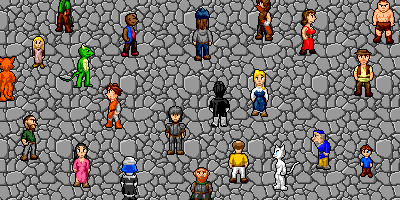 Get your character to appear in the comic! Send me a design of your original character, and I'll turn them into a sprite and use them in crowd scenes. Be on the lookout for when they might be in a crowd!

Hello and welcome. My name is Phillip "Guildmaster Phill" MacArthur. I have been drawing comics on and off for many years, and although I don't have much interest in becoming a career comic artist, I do believe I have written a script that has some merit. This idea is called Adventurers' Guild. Unfortunately, I write faster than I draw, so it's a lengthy process right now.
The story is all ready, but if you are willing to support me through the long haul of producing the art, please consider donating! Because the script is finished and that in of itself was quite an accomplishment for me, you know I'm in this 'til the bitter end. I hope you'll join me.
Adventurers' Guild is a adventure/drama webcomic stylized to look like a retro role-playing video game. It plays with stereotypical characters and tropes as a springboard into deeper and darker plotlines later on.
And of course, check out my comic here: Adventurers' Guild