$1
per month
Join
Exclusive look at the early stages of our process. You'll see the sketch layouts, pencils, and inks. I'll also be showing the reference materials used for elements of a page.
Includes 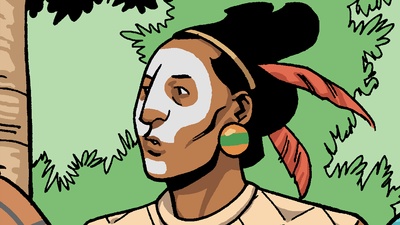 $5
per month
Join
Exclusive look at the finished colored pages in all their glory, without the word balloons. Comparisons of coloring choices between myself and my co-colorist. Also, reference that may have been used during the coloring stage.
Includes

$10
per month
Join
Posts that go deeper into the process of drawing and writing this series. Comparisons of initial drafts of the work to revised versions, that is, showing mistakes that needed to be corrected. After six months of support at this tier, I'll send you an original 4.5" x 6" sketch of a character from the series.
Includes

This is a nonfiction graphic novel about the Aztec Empire's dramatic fall. It’s a unique tale in human history, and one that has yet to be fully or accurately told in a visual medium: comic books, movies, or TV.

I've been fascinated by this story for many years and continue to research it exhaustively as new discoveries are made. I'm collaborating with award-winning artist David Hahn. We're both longtime comic book pros and founding members of Helioscope, which is North America's largest comic book studio.

I'm making every effort to be as historically accurate as possible for Aztec Empire, since the actual events are so surreal that any attempts to fictionalize elements of this epic would only undermine the incredible-but-true nature of the narrative.

Science-fiction and fantasy fans will find this unique event in our recorded history to be a real-life "alien first contact." In this case, between two sides of a planet that were separated since the dawn of human civilization, for 10,000 years, before realizing the other even existed.

Aztec Empire will be released in episodic form, eventually totaling 500 pages. Each chapter will include bonus material such as historical endnotes, maps, and illustrated features on the different cultures involved in the story.

“Good luck with this work that we know will contribute much to our people and knowledge of our culture! The art form of comics has a teaching power like no other medium. We would be very honored to help publicize it … and help you in anything that you might require in your research.”
—Ka’an Comics, pre-eminent comics retailer in Mexico City