The Pickle
$1
per month
Join

The Humble
$5
per month
Join

The Pioneer
$10
per month
Join 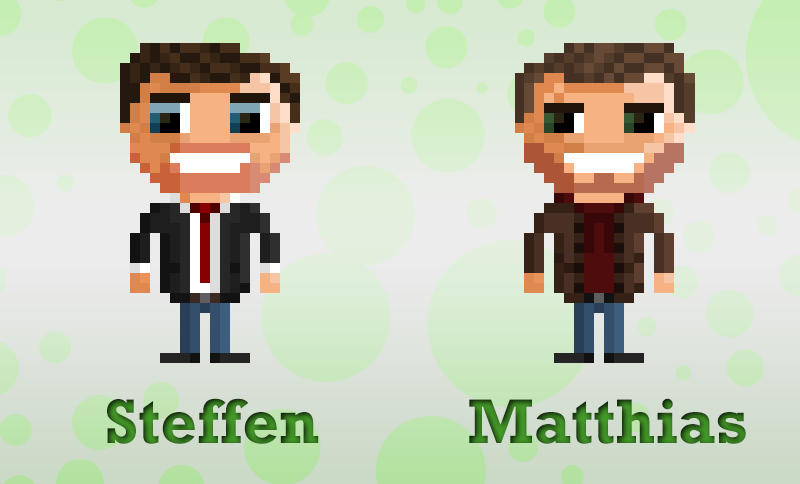 Early 2014 - Two bavarian brothers pursue a dream.
Steffen is already an advanced computer scientist with work experience, while Matthias has just started studying Computational Linguistics at university.
To teach ourselves the basics of video game development, we start writing a 2D stoneage MOBA game from scratch in pure Java instead of using pre-existing libraries / engines.
Based on the ancient greek word for 'stone' - 'lithos', we name the heroes of the game 'liti', a neologism meaning something like 'the stonies' (I know, right?).
The title of our epic prehistoric masterpiece would go down in the annals of history as
'LITI - Stoneage Brawl'.

In the following two years, we learn a lot about 2D physics, tilemaps, rendering processes, networking, particle systems, drawing, animating, game design, etc., while recognizing the huge potential of the technology we've created.
Steadily, we begin extracting the core mechanics of the game into a separate library in order to reuse them for future projects.

April 2016 - Side projects - curse or boon?
Two years into the development of LITI, we decide to participate in our very first game jam, the famous Ludum Dare jam. Within 72 hours, we create a humourous zombie shooter going by the name 'DR. LEPUS - The last rabbit on earth', which is another great stress-test and proof-of-concept for LITIengine. We enjoy the game a lot and decide to develop it into a full commercial game.

At this point, we postpone LITI's production to recharge creatively and try some new things with our beloved engine.


April 2017 - Another year, another game jam / The power of the crowd.
During Ludum Dare 38, we create the reaction-based puzzle game 'Naughty Gnomes', where you try to throw cake at pesky circus gnomes to reclaim your stolen clown nose.

After the exhausting game jam, we finally publish v0.4-alpha of the LITIengine as an open source project on GitHub. By going open source, we hope to channel the power of the crowd to create the ultimate 2D Java Game engine.

September 2017 - What if we just....?
At some point it dawns upon us that we should probably gain experience concerning the digital distribution of commercial indie games if we want the launch of DR. LEPUS to be successful.
Therefore, we come up with a small project to become familiar with steamworks and indie game publishing in general:
' Naughty Elves', an enhanced take on the core gameplay of 'Naughty Gnomes' with a christmas setting, is released in the pre-christmas season 2017.

January 2018 - Focus, gentlemen!
The feedback and experience gained from Naughty Elves is very valuable for our future efforts. DR. LEPUS, on the other hand, is shaping up nicely: Revamped graphics, a full story campaign, more weapons and upgrades, and tons of other cool features have transformed the game into an entirely new one.

August 2018 - Let's get weird.
Ludum Dare 42. Oh boy. 'GoIn - Behave or GET LOST!' is originally meant to be a night club managing simulation where you need to keep your customers happy. The final version of the game is... a little different. The Goal: Throw naked people out of a night club to keep paying customers happy!

At the same time, LITIengine becomes known to more and more people, even third-party collaborators join in on the development. In August 2018, we register 1.2k users on litiengine.com.


Today
In September 2018, LITIengine comprises:
To find out what makes LITIengine so special, visit litiengine.com!
Our engine has evolved from a small learning project to one of the most popular Java 2D game engines, and all our time and effort creating it was spent entirely in our free time and without monetary compensation!

Since we want to keep turning LITIengine into the ultimate Java 2D game engine, we need your help:
Maintaining servers, replacing and upgrading technical equipment, travelling to meet each other, as well as trivial things like electricity and internet cost money. Over the past four years, we've borne these development costs from our private narrow budgets that we had available as students.
Due to the size of the project, we believe that it is no longer feasible to consistently bear these expenses on our own.
Depending on how successful we are in raising third party funds, we consider dedicating one or more full days per week to the development of LITIengine, bringing you an even more sophisticated product.

So if you are passionate for video game development, enjoy our games or simply want to support us living our dream, your humble donation would help us a lot!