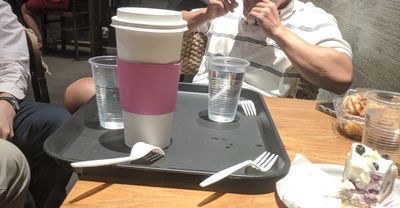 I don't drink coffee so maybe bubble tea is more relevant 😂, Thanks!

$7
per month
Join
If you're in the city (or vice-versa), just a suggestion to play some board games with me!

$10
per month
Join
Thanks for supporting my writing in some form!

> My recommendation is to sponsor me (and other developers) on https://github.com/users/hzoo/sponsorship now

> TL;DR I've left my job to work on open source and Babel full time, and have created this Patreon (on 3/2/18) to help fund myself with the community's help!

My last day at Adobe was 3/1. I've had the wonderful opportunity to work there for 2.5 years, with the last year working on Babel itself for half of my time. I've been the primary maintainer on the project for the last two out of three years of its existence.

But here are my next steps: to take the leap and pursue working on open source full-time (rather than continue to work on Babel half time, work somewhere else, or just quit)!

My goal is to sustain myself on this journey through this Patreon! But if you'd rather donate to Babel itself check out our Open Collective.

Patreon (this site) is a service that enables you to support a creator through monthly payments. It's a way for someone to support themselves doing exactly what they're passionate about: whether it's creating books, videos, art, and in my case code (or something more abstract like project maintenance). By users supporting them directly, creators won't need to resort to doing unrelated side work, quick, low-quality content to pay the bills, or even sponsorships for specific features.

Babel is an open-source, community-driven tool. It's a JavaScript compiler that Facebook, Netflix, and Spotify and countless others (including Patreon!) use to ship software for the web. Babel not only allows developers to use the latest syntax in older browsers, but even has its role in shaping the future of the language itself due to its adoption in the community. It's downloaded over 18 million times a month and used by over 1m repositories, all while being maintained by a group of volunteers. Even if you don't use Babel yourself, you are probably using tools/websites that do: whether it's frameworks like React/Vue/Ember.

Here's my background with the project: I've made almost every release since v6.3.2, created babel-preset-env, set up our meeting notes, got us more involved with TC39, and pushed for us to get involved in Summer of Code. I've gotten the opportunity to speak about my experiences trying to maintain this project, how it works, and the emotions around being a maintainer.

If you or your company use Babel or appreciate the work I do in open source, please consider supporting me directly (or Babel as a project via Open Collective) so I can continue maintaining it and growing our community as my full-time job! I think it's pretty clear that software actually costs something, and that even though it may be offered freely, somebody is paying the cost. Babel isn't maintained by robots, its own corporation, or a team at Facebook.

Unfortunately there can be an inverse relationship between a project's usage, popularity, and level in stack. Babel is ubiquitous in the community, yet the project has only had a few people working on it during their free time. Since it's not a framework, it has been abstracted away so that many people don't even know it exists and just think it magically gets updated (this is a good result but a huge burden).

You'll be helping to ensure I can spend the time not just fixing bugs, adding features, releasing new versions, but also keeping the project afloat and growing our maintainers (I certainly don't want to be one of few working on this).