is creating a new edition of the Dragon Warriors RPG

It all helps, especially when multiplied by 12. Ten patrons at this level would, in a year, pay for a colour painting or a couple of interior illustrations.

You'll get to see the sneak-peek posts of excerpts from the rules.

Designing a roleplaying game is like spinning plates. "Why not try this changing rule X to Y?" one of my players will ask. But each change dominoes throughout the system, and -- OK, I've lost the spinning plates analogy, but you get the point. At this tier you get access to my ongoing rules discussion.

Multiply by 12, remember. Only opt for this if you want to be acknowledged in the book.

Thirty-five years ago, Oliver Johnson and I published a roleplaying game called Dragon Warriors. It may have been the first RPG to appear in a paperback edition (and hence as an affordable pocket-money purchase) in regular bookshops, at least in the UK. The game's setting was Legend, a low-fantasy world with a strong flavour of European folklore:

"A land of cobwebbed forests and haunted castles. A land where dire monsters lurk in the shadows of the night, where hobgoblins shriek across the bleak and misty moors, where wizards and armoured warriors roam dank dungeons in their quest for gold and glory. The realm of your imagination."
Eventually we switched to using GURPS for our own Legend campaigns. Oliver had always argued that the rules should only use six-sided dice, and what can I say? He was right. The polyhedral dice got packed away, never to return to our gaming tables. But, much as I admire the design of 4th edition GURPS, it does take up several hundred pages and a few dozen rules supplements. If you're foolish enough to trigger a large-scale combat, it feels like solving the three-body problem without even having recourse to a pencil and the back of an envelope.

Running Gregor Vuga's Sagas of the Icelanders, I enjoyed the streamlined system that allowed me to focus on the events in the game rather than the maths needed to crunch them. A seed was planted. I got to thinking about a new set of rules for legend, D6-based, and with a core system simple enough to fit into a dozen pages or less. Of course, there's more detail if players want it - for magic especially, but also combat, social interaction, prayer, thievery and so on. But it's up to the players how much they want to zoom in.

This new game is Jewelspider. Oliver and I are running it now, tweaking the system, with a view to publishing it in 2020.

So is this Dragon Warriors 2e?

Not quite. At least, we're purposely not calling it that because a lot of people use DW for combat-heavy dungeon-style games, whereas the emphasis on Jewelspider is for adventures on a broader canvas. There will be rules for combat, of course, but the system isn't intended to drill down to the level of tactical battles you'd see in a tabletop skirmish game. When we want that sort of game we use GURPS. The focus in Jewelspider is on building a shared narrative with players attempting swordplay, yes, but also sneaking about and cajoling and eavesdropping and scouting and seducing and threatening and pickpocketing and singing and conjuring and praying and fast-talking -- in fact attempting any action they care to try.

The Jewelspider book will feature some new one-shot adventures and a mini-campaign by Oliver as long as we can raise enough to pay for the maps and artwork to go with those. The kind of adventure you can expect is typified by "The Dean's Folly" and "The Holly King" (both by Tim Harford), "The Thirteen Pages" by Alistair Jackson, and "The Hollow Men", "A Box of Old Bones" and "Silent Night" (all by me).

What we need
If it was just the rules and the adventures there'd be no need for Patreon. We're mostly doing those for our own group anyway. Admittedly we don't write up adventures to be "publishable" (we prefer to run a looser game from notes) so that will involve a little extra work. But the big obstacle is art. I have commissioned a fabulous painting by Tancred Dyke-Wells and I'd like to get some pictures by Jon Hodgson too, as for me and many others he is the definitive Dragon Warriors artist. (That's one of his above.) And ideally the book will have maps and interior illustrations too. That's what costs money. Hence Patreon.

Once bitten
It's not my first, as they say, rodeo. Leo Hartas and I tried raising funds on Patreon for our comics epic Mirabilis: Year of Wonders. That was a pretty resounding failure. We had a few backers putting in $10 and more (and my eternal 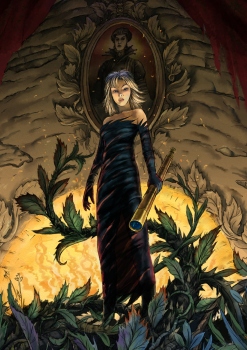 thanks, by the way; you know who you are and you are stars) and if we'd had a couple of hundred of them instead of a dozen then we could have funded an entire Mirabilis season. (That's about 200 pages of the comic.) Well, I guess it serves me right for biting off such a massive project. Being unable to continue Mirabilis is the biggest regret of my career - which on the Cantril Scale marks me out as absurdly privileged, and has at least taught me that unless you're a celebrity there's no sense in trying to crowdfund a project requiring over a thousand full-colour pictures. Luckily Jewelspider should only need half a dozen colour pictures and maybe a couple of dozen black-&-whites, so it might just be attainable. I guess we'll see.

And another thing
Having got started on Jewelspider, I've also been dusting off another couple of roleplaying projects. One is Abraxas, co-designed with Jamie Thomson, which is a science fantasy game with overtones of Tekumel, Barsoom, the Hyborian Age, and Lemuria. The other is Λ - a classic Greek RPG centred on Sparta. I've already commissioned cover art, but those are on the back burner till Jewelspider is ready to launch.