Named after Lazarus first born son this tier gives you:

Named after Lazarus second born son this tier gives you: 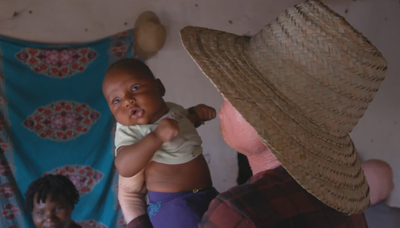 Named after Lazarus 3rd son this tier gives you:

- Get a Lazarus t-shirt

I’m Lazarus, a musician and albinism activist from Malawi, and my debut album STOMP ON THE DEVIL is due to release in August 2019. And this is Johan, a film and music Producer from Sweden best known for producing Mumford & Sons, The Very Best and Baaba Maal. Together we’re making music and raising awareness to try to stop the senseless killings of people with albinism in Malawi. We’re doing this through the universal languages of music, film, and community building.

This is how we met.

JOHAN: “Two years ago a friend from Malawi showed me a 10-minute film. It was Lazarus, a street performer busking around the capital of Malawi, Lilongwe. I loved the music he was making, and I knew I had to meet him. I was also aware of the albinism attacks and murders in Malawi. People with albinism are often hunted, killed or mutilated because of an unfounded belief that their body parts can be used in witchcraft. I wanted to do something. I wanted to show the world that our similarities are greater than our differences. I felt that if we could make an album together and tell a story, we could challenge perceptions and drive change. That’s where our journey began.”

Music unites people and that’s exactly what happened when I met Johan. We made my album outside my house, on the streets of Malawi, with the banjo I made myself and a kick drum. The voices you hear are local voices, the music you hear is the music of my home. But it’s more than making the music I love to make. I believe that this is the right time and the right team to help stop the persecution of people with albinism in Malawi and worldwide. We must take action.

Johan rallied an amazing documentary team to film the making of the album. Directed and produced by Oscar nominated, Emmy winning filmmakers, David Darg and Bryn Mooser, the film tells my personal story. It opened to rave reviews at the Tribeca Film Festival in New York this year and I’m extremely proud to say that they awarded me the DISRUPTIVE INNOVATION AWARD for my work as an albinism activist.

While we were recording in Malawi, Madonna saw what we were doing on Instagram and asked to meet me. I ended up playing at the opening of one of her new schools and she came on board as Executive Producer of the documentary!

This is just the beginning. I have had some amazing support to help me achieve everything I have achieved so far, but I don’t want it to stop here. In order to take care of my family, to feed and school and protect them, and to keep on making music and making an impact, I need your help!

Become a patron and you will allow my voice to be heard, both as a musician and an activist.

Thank you for coming on this journey with me.
"Don't ever change your style of music, I love how organic it is. It’s the future.” Madonna