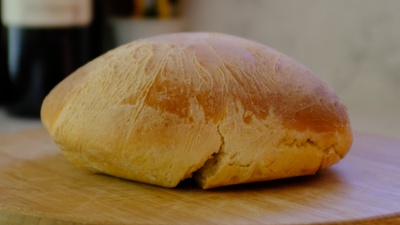 $3
per month
Join
A big huge hug and a FAN welcome to you!
Thank you for joining my world - we are going to have tons of fun together!
Thank you for the homemade sweet brioche toast!
You now have these entry level benefits:
Patron-only Polls
Early access to concert updates, tickets, and upcoming releases.
- I hope you'll share your artistic ideas, feedback and input with me - for concerts, workshops, repertoire, videos, and recordings. My ears are wide open. I am listening!
Thank you so much for supporting my work. Please stay tuned for more!
(This is a pic of my first-ever home-baked brioche loaf, which is best toasted with butter, or even better hot out of the oven. Remember - bread is like music, it's fundamental) 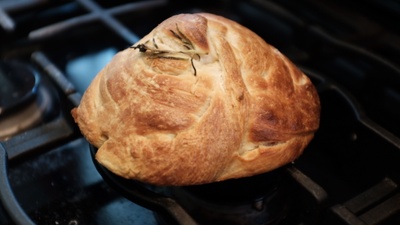 $9
per month
Join
FRIEND - thank you SO much!
Welcome to my second tier - we are going to have a blast together!
Thank you for the challah loaf!
You will receive all the wonderful FAN perks plus:
- A monthly mp3 track from my extensive recording archives, including historical never-released-recently-digitized-live-performance recordings. (Even though I have over 40 commercial CDs, I have a large 'live' tape collection that I’m ready to share)
- I'll share news about my projects, and the NYC scene - on new creative voices in the mix - (this could be especially interesting to out-of-towners.)
Thank you so much for supporting my work.
(pic of my sweetish braided challah that rose so much the braids merged together, yet it still tasted divine) 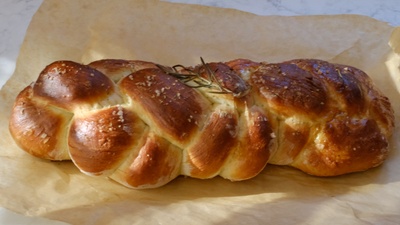 $25
per month
Join
Mazel Tov - you have entered the FABULOUS world!
Thank you for this love's labor three-braided challah!
You now receive Fan and Friend perks plus:
- video rehearsal clips from my practice sessions - I'll talk about music I'm learning, about how the piece unfolds, including practical and aesthetic issues like why things really work, and why they're a worthy challenge.
- If you're curious I might occasionally reveal insider secrets, like practice tips, unconventional (ie: normally pricey) fingerings for scales and arpeggios, and fun warm-up licks and improv exercises.
- You'll have access to discounted (artist price) signed commercial CDs from my official recording archive.
Thank you so much for supporting my work.
(pic of my first 3 braid challah loaf in the sun, a bit unevenly braided, but so tasty)

Hello Everyone and a HUGE Welcome!
I want to share my musical and artistic world with you.
Please check out the SIX TIERS
of support I've created:
Fan-Friend-Fabulous-Family-Phenome-Feast!

I'm missing people, live concerts and interacting with audiences. I know everyone's feeling the crunch, however in exchange for your support, depending on the tier, you can enjoy private on-line concerts, piano lessons, composer-performer workshops, mp3s, CDs, videos, rehearsal access, tips, insight, exchanging ideas, news, tickets, discounts, life-on-the-road experiences as well as tennis and bread* baking chats - if you want!

Since the pandemic lockdowns began, when all our concerts vanished, I have been re-thinking and re-orienting what I can now offer the world. Rising to the challenges musicians are facing, (given no 'live' concerts on the horizon), I've been keeping myself pretty busy sharpening my online skills and tools. I have built a little home recording studio and taught myself how to record - audio, video, and photography. I've been making some music videos for composers that have been ‘keeping hope alive’ (through their loyal employment), while learning new works for longer term CD projects. I've given some online guest lectures and festival coachings, and I'm teaching piano and composition tips one-on-one via zoom through hireartists. I've also learned how to bake bread, prune roses, and refine my drop shots on court.

Basically, I am currently expanding my work, reaching deeper and further into a wider sphere on-line - mentoring, teaching, exploring new technology, new repertoire, new techniques, improvisation, composition, commissioning, recordings, videos, and (naturally) performance.
Over the last 4 decades I've been performing, commissioning, and recording music - as a classically trained pianist - often using my vocals, text and dramatic elements - mostly within the new and experimental side of the concert music business. I have collaborated with over 250 living composers and recorded more than 40 commercial albums. Having been around the world a few times and back, performing in venues of every shape and size with an incredible array of artists, I've experienced a very diverse range of music from the latest genre-busting creations 'hot off the press' to classical works by composers like Bach, Beethoven, Schumann, and Janáček.

It is quite intimidating at any time to ask for support, however, these times are unprecedented - with no concerts or tours for the foreseeable future. Patreon provides a vital support mechanism for artists and it will allow me to share the innovative and creative world we have built up over many years together - and want to continue. Patreon enables me to keep going with what I do best.

Thank you for considering supporting my work!
Any amount helps to keep it all going.
(FYI you can opt in or out, decrease or increase at any time)

Lisa Moore’s playing has been singled out by The New York Times for its “life and freshness” and “fragility and tenderness”. Her performances combine music and theatre with expressive and emotional power – whether in the delivery of the simplest song, a solo recital, or a fiendish chamber score. Described as ‘the wonderfully lyrical pianist’ in TimeOut New York and ‘visionary’ in the The New Yorker, Pitchfork claims “she’s the best kind of contemporary classical musician, one so fearsomely game that she inspires composers to offer her their most wildly unplayable ideas”.

Lisa Moore was the founding pianist for the Bang On A Can All-Stars from 1992-2008 and, with them, the winner of Musical America’s 2005 Ensemble of the Year award. Given a special passion for the music of our time, she has worked with over 250 composers – including Iannis Xenakis, Elliot Carter, Philip Glass, Steve Reich, Meredith Monk, Frederic Rzewski, Ornette Coleman, Jonny Greenwood, David Lang, Don Byron, Martin Bresnick, Elena Kats-Chernin, Paul Grabowski, Kate Neal, Thurston Moore, Missy Mazzoli, Hannah Lash, and Julia Wolfe.

Born in Australia, Lisa grew up in Canberra, London and Sydney. She began piano at age 6 and studied formally at the Sydney Conservatorium, University of Illinois, Eastman School of Music, SUNY Stonybrook, and in Paris with Yvonne Loriod-Messiaen. Based in New York City and New Haven Lisa teaches at Yale-Norfolk Summer Festival of Music New Music Workshop and has been a regular guest at the Australian Academy of Music, Melbourne.

Thank you for reading and for your considered support!

I hope to join with you here, or if not here, then somewhere down the road.
Stay well, stay safe and let's go!

* bread because, like music, it's a metaphor for life.
Profile photo by Yumiko Izu
Cover 'action' photo by Peter Hislop