mZmm is creating content you must be 18+ to view. Are you 18 years of age or older?

$2
per month
Join
or save 10% if you pay annually
You'll get:
Includes Discord benefits

$5
per month
Join
or save 10% if you pay annually
You'll get all of the above, plus: 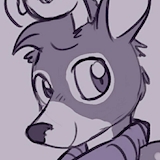 I'm a furry writer and game designer. I've been writing stories and the like since I was around 12 years old. It's my talent and passion in life, and I'm glad that other people enjoy what I create. I've been formally involved in the fandom for only around 3 years, although I've been following it on and off since around 2013. I've written quite a few short stories of furry fiction, but my most-known creation is a text adventure named "The Hotel".

The Hotel is a text adventure game coded in Quest. Explore a strange and rundown establishment full to the brim of colorful characters out to get you. Collect tokens and piece together the history of this establishment without getting caught by one of its many patrons!

The game's latest version is available on itch.io for $7.49, and the update before the latest update is always free-to-play on itch/furaffinity. Buck-level and higher Patrons get access to the latest versions before anyone else!

Buy the game or play the free version here!

I also write a lot of short stories featuring various (mostly lewd) subject matter!  Check them all out here.

Support from people that enjoy my work would not only motivate me to continue development of the game, but also give me the time to dedicate to doing so. Since my work is text-based, it's difficult to provide my Patrons with proper benefits, but I have tried to offer appropriate rewards.  You'll be able to see upcoming updates early, vote and give feedback on potential changes and additions, access and playtest alpha builds, and preview WIPs of my stories, as well as read the finished stories early. I also wanted a better platform to communicate with people who are the biggest supporters of my work, and to give them the appreciation and recognition they deserve! You guys are the reason I'm able to put out so much content on such a consistent basis.

I don't believe in paywalling any of my content, so that's why the only things in terms of content that I offer exclusively to Patrons are alphas and betas that would eventually be released as full versions to the public, as well as early previews of my other work. Everything put on this Patreon will eventually be public!

$903.63 of $1,000 per month
I will be able to make writing my full time job, meaning I will be able to dedicate much more time to my novel and my games instead of constantly taking commissions.
4 of 4