is creating Mauve and Yellow Army, a blog about Cardiff City football club. 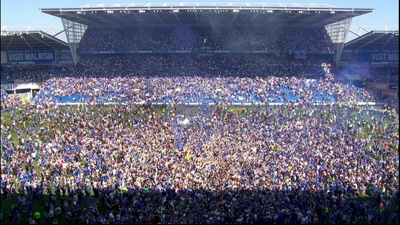 $1
per month
Join
Mayas is the title given to those who choose to become Patrons of the Mauve and Yellow Army blog about Cardiff City football club. As Patrons , you will receive personalised e-mails delivering the latest stories to you and a degree of input to the extent that there would be at least one story per month on a subject chosen by a Patron which they could either write themselves or provide material which I would use when putting the story together.

I have other ideas for possible benefits for Patrons, but much will depend on the numbers willing to make a contribution every month - if there is sufficient interest then I would like to make the whole thing as democratic as possible and so Patrons would be allowed to make their own suggestions as to the nature of any incentives offered.

.
What this is about

Hello, my name is Paul Evans and I'm sixty two years old. I've always been a frustrated sports journalist and in 2009 I decided to create Mauve and Yellow Army (MAYA), a blog about the football club I have supported for fifty five years, my "home town" team, Cardiff City – recently, I have also set up a Twitter page at https://twitter.com/MauveAnd.

During the past nine years I would like to think that MAYA has established a foothold for itself as a place to go to for comprehensive and, I hope, honest and fair analysis on Cardiff City Football Club. In that time, I must have watched at least three quarters of all of the home matches played by the club’s Under 23 and Under 18 (Academy) sides, so the coverage on MAYA is by no means limited to the senior team at Cardiff – as a look at the sections entitled “The stiffs” and “The kids” will testify. Besides this, there is also a section on Welsh international football.

I'm the sole contributor to MAYA, but I’m very grateful for the input of all of those who have helped to turn its Feedback section into a vibrant, entertaining and informative portion of the site.

I used the word “honest” earlier to describe the sort of stories I provide, but, perhaps, a more apt one word description would be “independent”. Whether I’m right or wrong (believe it or not, I do get things wrong at times – as a look through the “Old Stuff” catalogue of all of the articles I’ve written will prove!), the opinions expressed are no one else’s but my own.

My intention nine years ago was not to earn a regular income from my writing, more to do something that I enjoyed about a football team I love. In all of the time MAYA has been in existence, my average level of income from it has been less than £10 per annum and it’s been quite a bit less than that in recent years!

The advert some of you may see (it isn’t there with some browsers!) in the top right hand corner of the page when reading MAYA is the only one which has ever appeared on the site, because I made the decision very early on that I did not want it to be “plastered with adverts”.

However, running costs have become increasingly hard to meet as they have almost doubled in the near decade of MAYA’s existence and it would not have survived this year without the extremely generous help of a body of fellow Cardiff fans who covered the cost of the latest set of web hosting fees.

Cardiff City’s totally unexpected promotion to the Premier League a few months ago has left me wanting to expand MAYA to reflect our new status, but the matters outlined in the previous paragraph would have made this impossible and so, I was becoming reconciled to the fact that it wouldn’t be able to continue beyond the next web hosting fees demand in the current format when I found out about Patreon.

If you have read this far, it means you are at least mildly interested in MAYA and for that I thank you and encourage you to read on as I outline my plans for the future, while also explaining what Patreon is.

How will MAYA change

The plan is that it won’t change at all in terms of content. I intend to keep on producing the same sort of work, written with the aim of being fair minded and analytical, that I have done throughout MAYA’s existence.

The aim will be that there will be more content, but I won’t be making any promises about daily pieces or anything like that, because it seems to me that you end up writing for the sake of it then – I feel the need to produce something every day leads to a decline in standards, if there’s nothing worthwhile to write about, don’t try to “con” your readers by making out that there is.

This takes me on to Patreon. A look at their website should tell you what they are about – essentially, they operate and manage patronage schemes, whereby fans (for want of a better word!) of a creator pay a monthly fee as a means of expressing their appreciation of the work being produced.

How much will becoming a patron cost?

Before answering that question, I should emphasise that Patreon is a voluntary scheme, so, if you do not feel you want to make a financial contribution, you will still be able to read all of the same content as you can now - MAYA is not going to become a site where you have to pay to read it.
However, if you do feel that you would like to become a patron, then, as someone who is not entirely comfortable with the notion of asking people for money to read my digital scribblings, I will be requesting the smallest monthly donation available under the scheme – payments are in dollars and so it would be a minimum of $1 per month from every patron, rather than going in for the sort of tiered system which is an option in Patreon,

I should say here that $1 is the base level of funding that Patreon allows, but there is nothing to stop you adding to that figure if you want to – suffice it to say, you will have my heartfelt appreciation if you do, but, then again, that also applies to anyone who contributes a dollar a month.

What’s the plan for the future?

As mentioned earlier, the group of City fans who provided the funding this summer to pay the latest web hosting bill helped postpone things for a while, but I have always known that there would come a day when I would have to make a decision on whether or not I could continue with MAYA.
I always thought that, when it came, I would be faced with two choices – either not pay the bill and let the blog die, or soldier on by opting for, say, a subscription scheme where everyone would be charged to read MAYA or go down the route of trying to dramatically increase advertising revenue by, say, using the “clickbait” option and/or “plastering the site with adverts”.

Frankly, I was never overly happy with the subscription option and was far from convinced that any advertising revenues raised would be sufficient, but I’m hopeful that the third option, Patreon, will work because of its voluntary nature and the fact that the sum I’m asking for every month is a relatively modest one.

The concept behind Patreon appealed to me, but I have to be honest and say that, primarily, I view it as a way to help with those costs.

As for plans, I’m thinking in terms of short, medium and long term priorities. The first one being to, hopefully, recompense as soon as possible those who have come to my aid in 2018 by paying those web hosting fees*. In the medium term, I would like to get into a position whereby running costs will never again become the issue that they have been in recent years. Then, if both of those aims can be achieved, I would like to have another go at writing a book on Cardiff City - I co-wrote one called "The Journey Back: Cardiff City's Rise Through the Divisions 1991 to 2013" which was published in November 2013.

I mention elsewhere that I’m thinking in terms of MAYA becoming a job rather than a hobby from now on. That doesn’t mean that I’m expecting a regular wage as such from my patrons, rather that MAYA will be able to break even to the extent that additional expenditure on things like the hardware required would be covered and, with my move from Cardiff to Tynewydd in March 2018, the travelling costs to the matches at three different levels that I fully intend to keep on covering will increase significantly as well – in short, MAYA has become a pretty big loss making operation at a time when I cannot afford it to be and so I’m hoping that situation can be changed.

How will MAYA change with direct funding?

A lot of this has been already covered above, but I hope the blog will change for the better as the additional time I’m willing to invest in MAYA will bring about improvements in things like research and scope of coverage – I also have one or two ideas in mind when it comes to the type of coverage I provide.

I'm so excited that you have reached my Patreon page and are interested in becoming a member of the close knit and friendly MAYA community. As my patron, you will not only have my heartfelt appreciation, but also an opportunity to influence what is published on MAYA in the future, because I will give full consideration to any suggestions from you regarding the nature of further blog entries - I also have one or two other "irons in the fire" when it comes to incentives for Patrons that I plan to reveal if things go well in the coming months.

Thank you so much for reading this sprawling ramble, the fact that I even feeling capable of asking something like this of you says a great deal.