Your nickname in the game! I'll add you in the descriptor-file for engravings and you might find yourself on a dwarven bedroom wall one day.
$10
per month
Join
Access to the Patreon member area.

Your nickname in the game!

Get your own custom item. I'll write an item for you to add to your game. This can be an armor, weapon, tool, clothing, as you like. Please keep the requests slightly realistic. ;) These will be added to the mod of course, as an optional addition. Enable PatreonItems:Yes/No?

It sounds like an adventure!
- Toady One / Tarn Adams

Your mods are some of the coolest things I've ever used.
- The Master

What is this?
Patreon is a crowdfunding website for content creators/artists. You can support people creating free content on the internet. Brave new world indeed. If Patreon is not your thing, maybe you'd prefer a one-time donation via Paypal.

I also write other smaller mods, graphics and dabble in scripts for dfhack.

Who are you?
I'm Meph, aka Patrick Martin. I'm creating mods and content for the worlds most complex computer game: Dwarf Fortress, a roguelike/strategy game, fantasy world simulator, story-device and art. Featured in the New York Times and the metropolitan museum of art, this game is the indie game, inspiring the likes of Minecraft and countless DF clones. It's in creation since 2002 by the wonderful Tarn Adams of Bay12games.com.

I've been modding this game since 2011, creating the largest and most popular mod: Masterwork Dwarf Fortress, as well as many other forms of content: Everything from minor mods, graphic packs to fan art and community fortresses.

I've invested over 3000h over five years into these projects.

In my real life I'm an adventurer. Sounds strange, I know, but I bike across continents, scale mountains, cross jungles and deserts, freeze my ass off in the arctic or climb down some caves. My main goal is to go everywhere, and for those who care here my website: http://worldbicyclist.com/

What is in MasterworkDF?
MDF is a pre-installed mod that is really, really huge. The largest iteration had about 1000 new creatures, 500 new workshops, 8 playable races, 20 races in total, 15 tilesets, etc, etc, etc. This version is for DF2014 but still playable in all its glory. 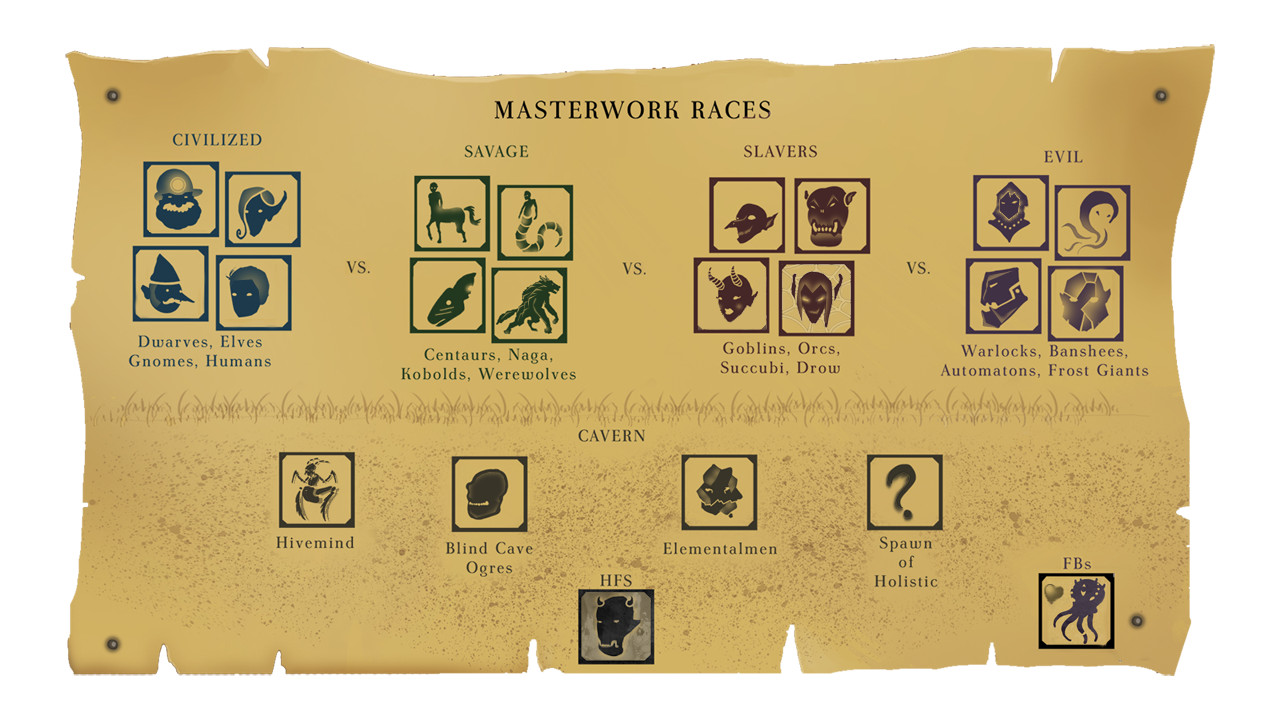 To give a more precise summary: MDF is Dwarf Fortress + Utilities + Tilesets + Extra Content + Launcher. It is similar to the StarterPack in use, but easily quadruples the games content.

It includes every range of mod, from bug-fixes to FPS-enhancing changes, over challenges for veteran players, both inside and outside your fortress, as well as story-telling and community-fort content. Additions can be purely ornamental, like decorations and text passages, while others change to game-flow fundamentally, for example if you play Necromancers and suddenly rely on corpses as main materials.

Complete other mods like FortressDefense 2 by Darkflagrance, Mythical Monsters by IndigoFenix, Succubus Fortress by Boltgun and many more...

What makes it so special/differs from other mods?
The sheer size and the ability to alter the mod yourself. You can add/remove any part of the mod and edit the Init, difficulty, graphical settings, anything... just by clicking a button.

Usually installing mods or tilesets requires some background knowledge and extra work, especially when merging several mods. With this mod pac, I've already done that for you. 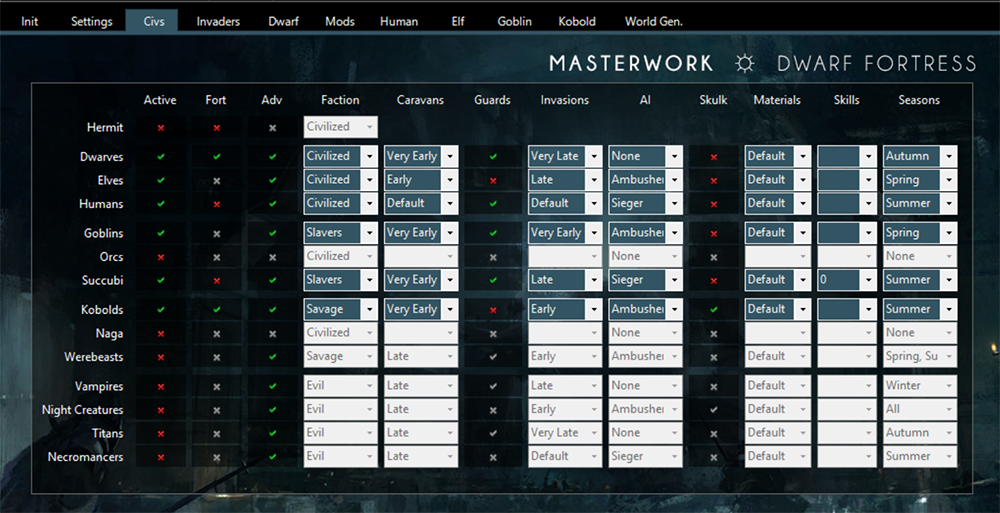 Have a look at the example above; you can pick races to fight against, play, which teams they form, if they attack early or late, their skills, which season they are active... if they bring traders or bodyguards, steal or snatch babies.

You love slaughtering elves? No problem. Want to fight along-side cute kobolds? Add them to your team. Necromancers are too unfair? Just turn them off.

If you don't believe me, believe the community:

Across versions it has over a quarter million downloads. More than all other mods combined.

What are your plans for the mod?
Of course you might want to know what I'm going to write, so here we go: I want to keep the mod close to the vanilla DF lore and expand on it. Best case scenario, all races will be playable:

Add to this races based on fire (demons), water (naga), werebeasts and necromancers, titans and nightcreatures, forgotten beasts and more. Everything the original game throws at you, expanded.

Why Patreon?
Modding DF started as a small hobby for me, but by now I spend well over 3000h of my time into it. But I can't always take time and the more I work on this, the less I work on other projects. I'm a freelancers or work on my own projects, so I do lose money by not doing "real" work whenever I delve into DF.

This resulted in stretches of obssessive hardcore-modding followed by stretches of doing-something-else. I want to change that and stick with a one-release-a-week schedule for MDF. And with that I can use your help.

Will I have to pay for the mod now?
No. Everything is and will remain free, available on Bay12 and DFFD, open-source and if you want to make your own mod, you can always take and use parts of my work.

I don't have money, but would like to support you somehow.
There are plenty of ways to help the mod. Fan art. Community forts. Bug reports. Balancing and features suggestions. Smaller modding projects you could do. Just come by the Masterwork forumand have a look around or write me a message. :)

I just stumbled upon this and have no idea what's going on.
Google Dwarf Fortress. Dwarf Fortress = Dark Souls + SimCity + BattleToads + Civ + Contra. You will have fun. You will be fine.