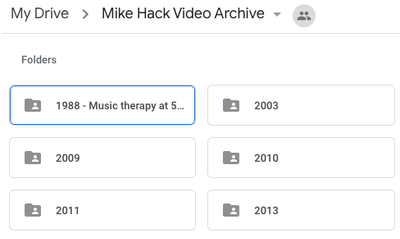 Access to the full in-progress Mike Hack video archive. Once subscribed, we will provide you with access to a Google Drive folder. All of this money goes to Mike.

Mike Hack is a man who makes videos. He’s been making them for a long time. Over the years, they’ve seen shifts in technology, changes in culture, and different phases of Mike himself.
Mike is a man with autism. This influences the way that he lives, talks, behaves, thinks, and feels. It can be difficult for people without autism (neurotypicals) to understand Mike’s experience, however, through his videos, he provides an insightful visual memoir.

When I (Max) was around ten years old, my mother received a VHS tape in the mail. Mike wrote his name on the front. I didn’t know who he was, but she told me he was her friend, and that he had autism. She also told me that he filmed himself inside an automatic car wash, except he wasn’t in a car. He only wore a bathing suit. I was enthralled by his commitment to something that didn’t make sense to me, at least on the surface. I don’t even remember asking why – I just thought Mike was so cool.

My mother met Mike in 1988 while she was studying music therapy at Arizona State University. Mike was five years old, my mother was twenty-one. They met weekly for therapy sessions, though for only a few months. At the time, Mike was nonverbal. Years later, Mike and his mother visited ASU again — Mike has fond memories (and an above-average memory) and wanted to reconnect with his former therapists. He asked for my mother by name. He called her and introduced himself. He’s an adult now, with varied interests, a passion for making videos, and a highly accurate recollection of the time he spent with my mother. This started an ongoing remote-friendship and a small collection of tapes from Mike.

Mike’s videos are highly-tactile collages layered with different sources, media, and timelines. Videos playing on a screen are re-recorded, resulting in two timestamps. Audio plays from both the-video-being-re-filmed and the original footage, on top of which Mike adds meta-commentary. Other times he edits and archives his videos by connecting a digital camcorder to a TV, that then records to a VHS tape. The result is an idiosyncratic (and simultaneous) production/editing process that reveals Mike’s deliberate decision making, calls attention to the process itself and builds a stacked montage of bygone pop-culture that Mike has filtered and digested for us.

Mike is also a performer, where his own voice and body are a constant presence. At times he is an actor, whether imitating a commercial for the Law Offices of James Scott Farrin or parodying Bill Nye The Science Guy as Mike Hack The Science Kid. Other times he is providing a voice-over for movies and television. His commentary makes connections to other movies and television shows, or songs, or advertisements, or sometimes to things that only Mike can understand. Other times he is present through the subjective view of a handheld camera, where pointing at something adds it to the lexicon of Mike’s endless world of overwhelming associations.

More recently, Mike made the move to digital video and editing, which has allowed his overall output to greatly increase. In his lifetime he will make hundreds of thousands of videos. The goal is to have them easily accessible online. This page is a way to support Mike directly and gain access to the ever-growing archive.

Thank you for joining us.