is creating Minions at Work, a webcomic exactly unlike all other webcomics

"Minions at Work" is a long-running web-comic exactly unlike all the other web comics. MAW isn't drawn, it's photo-illustrated using miniature sets, props, and 1/6th scale action figures, who all exist in a quirky meta-space in which their adventures are both "real," and in which they have some awareness that they are action figures and that their lives are fiction. The fourth wall USUALLY stays intact, but on occasion gets broken.

After six years, the comic took a break for a while starting back in 2012. But after a major reformat (from single panel to full-page multipanel, and a to a greater reliance on continuing storylines) it has been back, weekly, for several years now. I did take a short break again early 2016 for a massive heart attack, a month in the hospital, and open-heart surgery, but managed to drag myself back to the computer within a few weeks of coming home. I'm now doing great, untangling my tangled life, and excited about doing bigger, better, and hopefully eventually MORE comics.

Also, in addition to my weekly webcomics, I'm now doing exclusive added pages for the quarterly "Pulphouse Fiction Magazine" from WMG Publishing and editor Dean Wesley Smith. (You can see those too, with or without subscribing to the magazine. More on that in a bit.)

But here's a little history:

"Minions at Work," the cult photo webcomic active weekly between 2006 and 2012 was NOT your usual webcomic. Originally started as a lark by action figure collector and national-best-selling author (in addition to his own original fiction and computer games for Sierra, he has also written authorized fiction for the worlds of Star Trek, Conan, X-Men, Transformers, Mechwarrior/Battletech and others).

Featuring the misadventures of a team of semi-competent, freelance minions-of-evil (we should mention that their first appearance predates the movie Minions of Despicable Me by about three years), the comic was illustrated using photographs of customized 12" action figures on increasingly elaborate miniature sets. 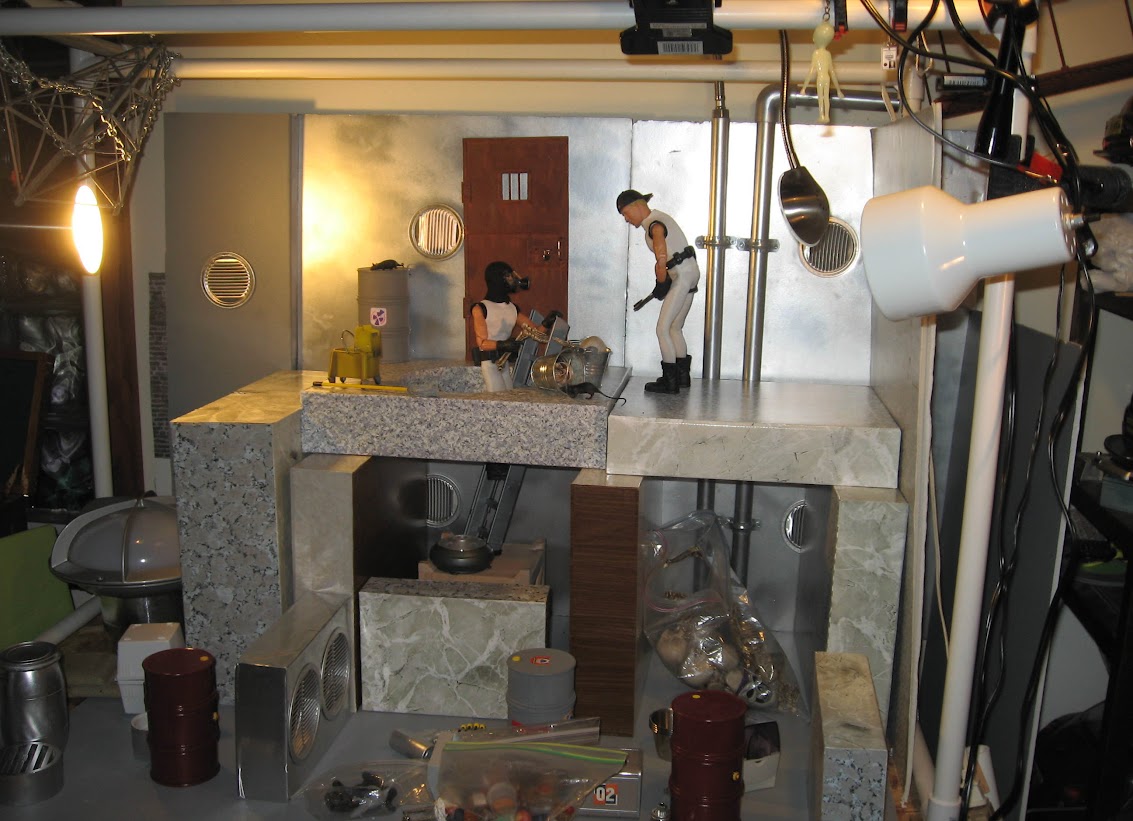 In 2012, serious family health issues and pressing deadlines caused me to put aside Minions at Work. I intended to get back to it at some point, but I really wondered if anyone would notice. Producing Minions at Work had, by the end, involved a considerable investment of time, space, and money. Did anyone even notice I'd gone?

Turns out they did. Fans tracked me down on Facebook and started saying things like, "I sure miss Minions at Work." "Are you ever bringing the Minions back?" "I loved the Minions I wish you'd do that again." Meanwhile, even though I'd completely neglected the Minions at Work site and hadn't promoted in years, the clicks kept pouring in, many of them funneling in through the popular site TVTropes.org where, unknown to me, some fan had linked several MAW cartoons as examples of various tropes. And finally somebody said the important thing: "Is there anything that I can do to help bring back Minions at Work?"

If people wanted it that bad, maybe it was time to bring it back. And I really missed doing Minions at Work. I missed the fun of building the sets and props, I missed the characters I had built in my head, I missed the structure of that little, weekly, deadline. But after some consideration, I decided that if I brought Minions at Work back, I was going to do it differently. I was going to take the work seriously (or as seriously as you can take playing with your toys). I was going to change the structure to be able to tell actual stories, not just gags, and to more fully explore the characters and universe I had built up in my head.

The first step was to move away from the single-panel format, and the exclusive use of unattributed captions for dialog. My model for MAW 1.0 had been Gary Larson's brilliant (and much missed) single panel comic, The Far Side. Not to compare my work to Larson's amazing run. That was simply the unobtainable excellence that I would at least strive in the direction of. But single panel cartoons are deceptively hard to do, in any circumstances, and even Larson often resorted to word balloons to sell his cartoons, and he had the advantage of actually being able to draw his characters mouths and expressions to clearly show who was talking in a given panel. I just had frozen-faced action figures, and had to hope that through gestures, framing, and dialog patterns, people would figure out who was talking.
I'd also made a real effort not to "cheat" by using photo-editing software to modify or assemble my panels, or extend my tiny sets. I sometimes edited out supporting wires or stands on figures and props, hid a few seams or gaps in backdrops, or add an explosion of other special effects. There were exceptions, but I always felt guilty about it. For no reason! Because ultimately, though people love the cheesy, Thunderbirds and I James Bond inspired sets, and the sense of physicality that they provide, I realized that would mind those cheats, when necessary, if it made for better story, funnier gags, and the bigger world that my Minions deserve.

So MAW 2.0 is multiple panels, with word balloons, much higher resolution, and stories that will usually be told in the equivalent of a comic book page at a time, often serialized over many pages if need be (though each page will hopefully have a stand-alone gag). When needed it will include miniature models and sets (smaller than my usual 1/6th scale), photo-editing for set extension, special effects, or to build "connective material" to tie together the 1/6th scenes. Here are a few "prototype" pages showing my early thoughts on how it would be put together (these are tests, and not intended to be great examples of my humor, especially the first two that are just random doodles):

And now we're full-on into the Minions at Work 2.0 format. Here are a couple of actual 2.0 comic pages:

While the original Blogger site remains static at www.MinionsatWork.com (mainly to keep those TVTropes links working as I slowly redirect them over), I've set up a new WordPress based site at www.TheMinionsatWork.com.  I've reposted those original comic panels there with bonus behind-the-scenes content.

Just to be clear, contributions aren't required for the comic to continue, for the foreseeable future anyhow. I LIKE doing this, and as much as other work and life issues allow, I'll keep doing it. But it does influence the PRIORITY I place on doing it.  If, through fan support, the comic were to start paying its own way, start generating even a small but steady income (as much or more as I'm now making off the exclusive Pulphouse comics, for example), well, that would change things. That could make it a priority for me, and give me a real incentive to put out new content faster, and the ability to make that content bigger and better.

How much should you contribute? I can't tell you that. If you have an extra ten or twenty grand laying around, it would sure help add a dedicated Minions at Work stage to that new building where I might be able to build sets bigger than a two by four foot workbench top! But as a starting point, how about contributing a buck (or more if you want!) a month? You probably lose that much change in your dryer or the couch-cushions already.  There aren't a lot of contributor awards yet, but I do try to give contributors early access to comics when possible, exclusive behind-the-scenes stuff, and you'll get to see those exclusive Pulphouse comics are soon as they're published in the magazine rather than waiting at least a year like everyone else.

And if you don't feel you can't afford or justify contributing, I'm totally okay with that! I still appreciate your reading the comics, making comments, and hopefully spreading the word about Minions at Work to your friends, family, co-workers, classmates, and social media contacts! Every one of you out there is important to me, and I love just knowing you're there! (You are there, aren't you? I hear breathing!)  And if you can contribute anything at all, to the cause, you are my hero!