is creating An Electro Swing Opera, "Some Words with a Mummy"

All of the above, plus a mention on our website's Patrons page.

So far, we have recorded the Overture, and part of Act One, Scene One:

The score is most unusual, not just for opera, but for music in general. The orchestra consists of the following:


Although the theater organ alone gives it a rich, eerie sound, when
combined with the other instruments, and talented singers on top of it
all, the electro swing sound achieved is really quite new!

Opera is Alive and Well

There was a time when opera was, not only a viable form of entertainment but, undoubtedly, the most popular of the performing arts. And while the art form has declined in both output and attendance, it is by no means dead. Many of us have heard or watched an opera and perhaps not known it because the music was not classical. Works like Porgy and Bess (jazz), as well as Tommy, The Wall, and Evita (rock/pop) are operas, every bit as much as La Boehme or The Pirates of Penzance.

Now there is a new opera in the works with an even newer style of music driving the action. You may not have been around to patronize Mozart or Verdi, but you can still be a patron to the very operatic team of deCosta and Lane. Such a deal! Such a deal!

Richard deCosta
Composer, Executive Producer, and Lead Animator
Richard deCosta has been writing music since age 10 after hearing and becoming entranced by Wagner's Ring Cycle on NPR. Almost entirely self-taught, he spent the next decades learning the craft of orchestral composition and arranging. Unlike most composers, Richard’s main instrument is the drums, and the rhythmic obsession shows in his compositions. Since the early 90’s he has diverged into composing in such diverse genres as jazz, latin, rock, electronica, and most recently, electro swing.

Thomas Cleveland Lane
Librettist
Thomas Cleveland Lane is a freelance writer for pelf and a stage performer, just for the joy of it. While he accepts no cash for his theatrical stylings, he does get a small stipend from the Washington Area Decency League, after having played the role of Hineszie in The Pajama Game, to never, EVER appear on stage in his underpants again. Mr. Lane is also an accomplished poet and is the Doggerelist Lauriat of America: a title he claimed for himself in the name of Isabella Rossellini and Ferdinand the Bull.

The opera we are creating is based on a short story by Edgar Allen Poe, yet it is clearly in the genre of opera buffa or comic opera. What’s that, you may well ask yourself. A comic opera based on Edgar Allen Poe? Yes, it was a challenge but, by no means, an impossibility. It turns out Poe did write a humorous story among his many grisly ones. It is called Some Words with a Mummy.
In the basic story, an adventurous fellow in Poe’s time and place (Baltimore, 1850) gets a message from a colleague, inviting him to come and view a genuine ancient mummy.
The narrator arrives at the home of Dr. Ponnanner, the owner of the mummy, and is joined by two other colleagues. After a good bit of poking and prodding, they see the mummy come alive, after which a number of hi-jinks take place.

The most important thing they learn—particularly the narrator, who is captivated by the notion—is that the strange creature could be mummified alive, then pick up, right where he left off in ancient times, once he is awakened.

The upshot of the tale is that the narrator determines to have this done on himself, so that he may be alive, well into the future.

Fair warning for those who would rather read the tale from the old master himself, rather than entrust it to a couple of 21st Century punks, the story will almost certainly not touch or otherwise molest your funny-bone. Tales of terror were Poe’s considerable strength, but he may not have been entirely comfortable writing a comedy. It is only comical when compared to such as pits, pendulums, and homicidal simians. Much of the tale is filled with scientific and pseudo-scientific mumbo-jumbo, which would very probably cause your eyes to glaze over and your attention wanders to the landscape of the planet Neptune if we were to present the opera as a literal transcription of the story.

To combat such a condition, we have taken outlandish liberties with the tale, to the point where we can only say the work is “based on” Some Words with a Mummy. But that is not a bad thing. Rather, it is a zany thing, as you will come to find out. If you like farce, then you have come to the right place. 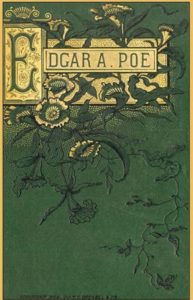 As to the libretto, we have, as mentioned, taken a great many liberties with Ed Poe’s prose. The very detailed anthropological and other scientific terminology would be difficult enough, even for a more educated listener, let alone your librettist, who took three foreign languages in high school to get out of taking any more than the bare minimum science requirement.

In order to fill the void created by the absence of hard science, we have inserted massive doses of tomfoolery, which is fitting, since the librettist’s name is Tom. In addition to our many musical japes and jokes, we have expanded upon the character (an unnamed narrator) who starts and ends the story.

First of all, we have given him a name: Throckmorton FitzSpitzenkoff or Fitz, for short. Then we gave him a witty and sharp-tongued wife, Rosalita vonDoyberger FitzSpitzenkoff, henceforth referred to simply by her first name. Like her husband, she will be in the first and last scenes of the opera.

One way in which we did stay faithful to Poe’s story was that we set it in Baltimore, in the middle of the 19th Century. Where we have fooled around with the timeline, we did so deliberately and not out of ignorance.

One final note to any potential directors: the words for Fitz and Rosalita are often tricky and unexpected. The same goes for the pseudo-scientists who will join Fitz later in the production. For that reason, you may want to emphasize strong phrasing and diction over bel canto. Think of General Stanley in The Pirates of Penzance.

Investing in the Unknown

In 1972 an excellent Jamaican film called The Harder they Come hit the screen. It was a compelling, well-acted work that featured some of the best Reggae music you will ever hear. At some point in the story, struggling singer Ivanhoe Martin is trying to get a big-shot DJ named Hilton to play his demo, and Hilton would have none of it. After explaining to the singer that he cannot expect to make any money off of an unknown, he tells Ivanhoe the very hard fact about show business that applies to all of us: “No business,” he told the youth, “no-show.” This is where we get down to the business.

As a couple of little-known artists ourselves, we must avail ourselves of some business before we can fully and proudly present our show. Like so many of the great composers and playwrights of the distant past, we are seeking patrons who want to keep the arts—particularly the performing arts—alive and well in an ever more materialistic time. If you are one of those people, then here is where you come in.

By supporting us on Patreon, you will be helping us to get the show on the road. As you may note from the site, most patrons help their artists out with monthly contributions of between $1.00 and $5.00, for which, in our case, your assistance will be duly acknowledged, appreciated and somewhat rewarded, although perhaps as only a couple of church mice can reward. More on that later. There is, of course, the reward of knowing that you are one of the good guys, which is something not to be sneezed, snorted or sniffed at.

What do we need money for?

Well, as artists, and humans, we need to eat, pay rent, you know, boring stuff, but necessary. More interestingly, it will allow us to pay our artists, singers, animators, and other supporting staff what they deserve! There are hardware and software costs that need to be covered, like a monthly Adobe Creative Cloud account, iMacs, paints & canvases, scanners, etc. So, there you have it!