is creating a lot of hijinks in this paranormal-fantasy adventure comic!

$1
per month
Join
Pay $1 or more and get comic page updates 3 days before they release to the public.
All patrons will get access to my discord server and a patron exclusive channel!
Includes Discord benefits

$1
per month
Sold Out
This tier is limited, so be sure to get it while it's still available! With this tier you'll get to see finished pages when they are completed, which can be up to a month in advance from public launch. In fact, you get everything up to the 15 dollar tier's worth of content for being a Little Sport!
Includes Discord benefits 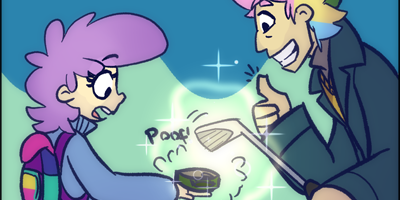 $2
per month
Join
Pay $2 or more and see concept art whenever it's available before it's seen by the public and early page updates.
Includes Discord benefits

About My Magic Grandpa 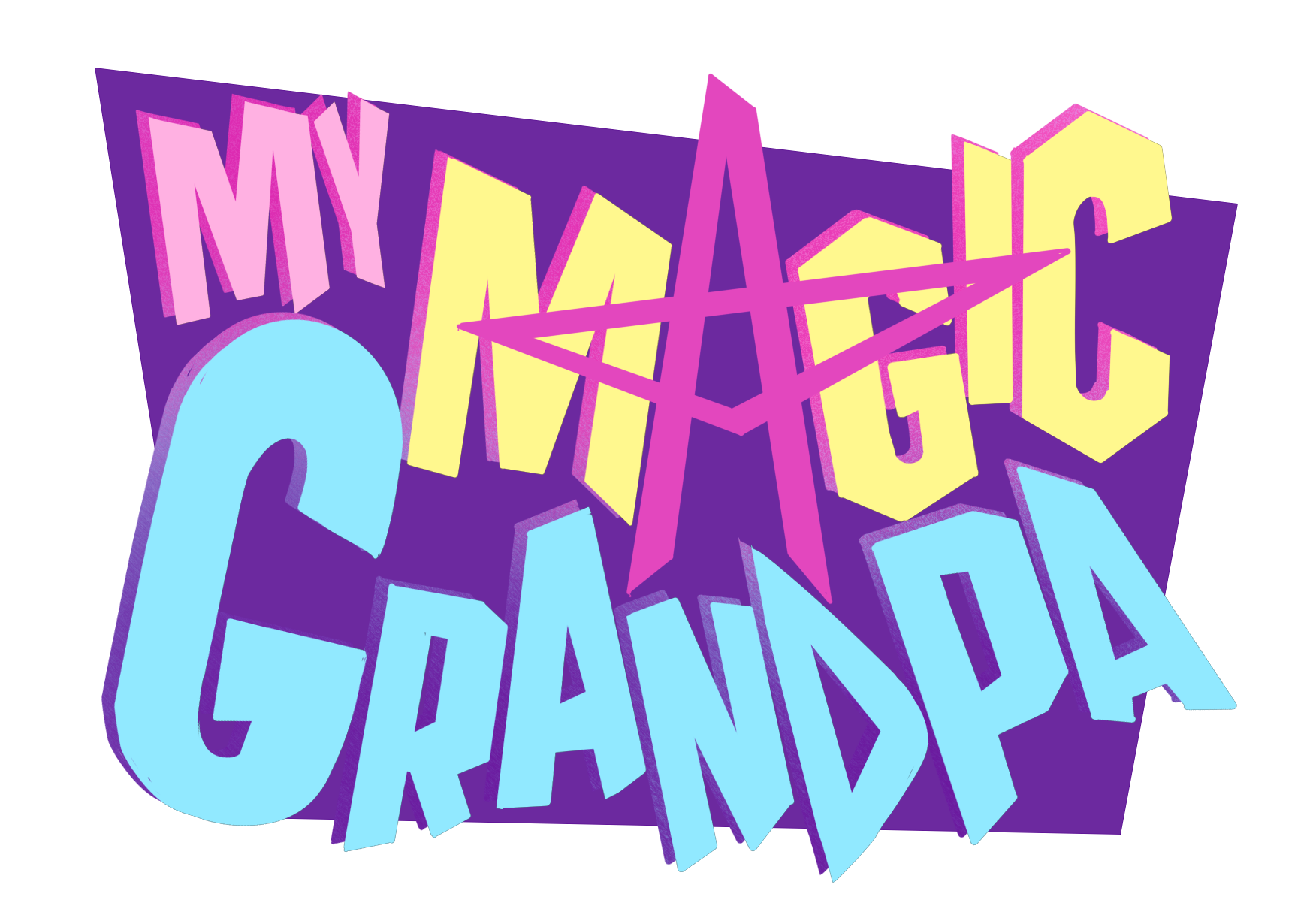 ‘Suzie is a very adamant straight A middle school student in bizarre but beautiful Northwest Oregon. Being so focused on her grades, she has no time for friends, and thinks it’s better that way. But when she gets herself caught up in a supernatural situation, her whole world view gets flipped upside down. Before she knows it, she’s pulled in to a life of mystery and adventure on the other side with her strange and eccentric Grandpa Coach, a man wielding a magical golf club who disappeared when she was a toddler. Why hunt the paranormal when you can befriend them?’
http://www.mymagicgrandpa.com [RATED YA]
‘My Magic Grandpa’ is a paranormal fantasy adventure that takes place in the mid-90s. The comic was inspired by a lot of the things I was passionate about growing up near Portland, Oregon, where I’d often go out exploring, camping, sharing ghost stories and myths, and embracing the weirder side of things. There’s going to be a lot of mythology and lore, both familiar and new, lots of emotional moments, fun moments, frightening, it’s got a bit of everything.
The main characters are Suzie and Coach, a young teenage girl who’s obsessed with good grades and her grandfather who’s a long time vagabond with magic powers. It’s not just a paranormal adventure, but a story about growing up and learning to overcome personal handicaps, to look on the brighter side of things and believe in oneself and others more. 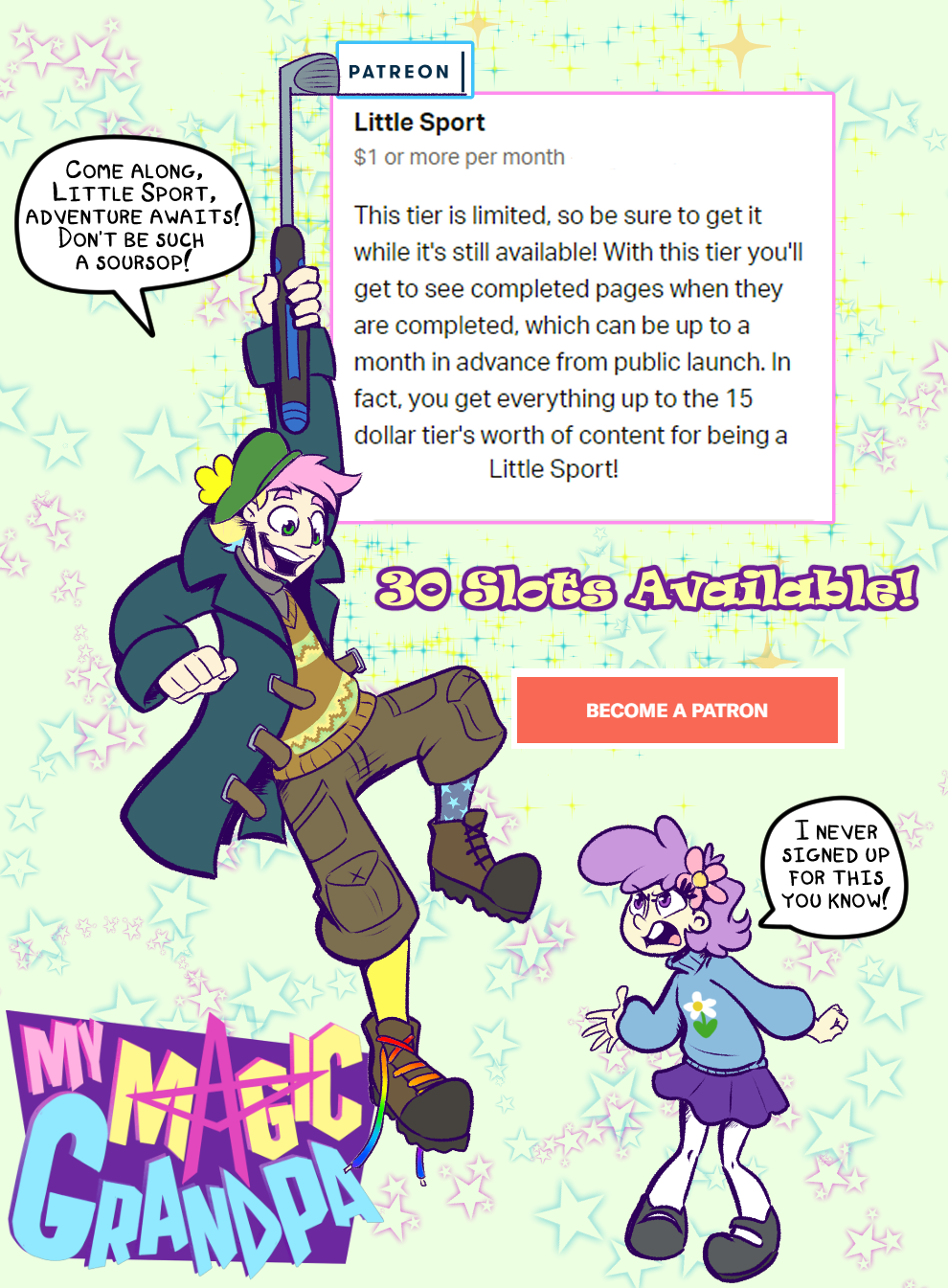 Why does 'My Magic Grandpa' need monetary support?
A:
To be frank, making a comic like this is a full time job, and I'm not being paid to do that job. Not unless I'm accepted by a publisher, which is my goal. So the more financial support I have for the comic, the more time I can spare to work on it comfortably. I'm self employed and my income is constantly fluctuating based on how many customers I get, and it's almost solely focused on bills and food. If I have more support, I won't need to take as many commissions and therefor will again, have more time to work on the comic. If I'm making enough to spare, I can upgrade my tools and invest in advertising and merchandise

Is "My Magic Grandpa" going to have an overarching story? And if so, is it going to be one big story through the whole thing? Or will there be TV-style seasons with their own arcs?
A:
My Magic Grandpa is set up with individual ‘episodes’ that can work on their own but ultimately form a linear and consistent story, much like how Supernatural is formatted. There will be five seasons, each with a different overarching plot and all connecting and leading up to the final season. Each season contains 11 episodes, and an episode can have anywhere from 1-4 chapters that each consist of 24-30 pages.


Can you add in my OC?
Sorry, but no. I was thinking of adding a reward tier for people to cameo but I realized it wouldn't be a good idea if I'm planning to publish this comic. It's just better for all of us if we don't involve people I don't personally know, there's a lot of risk in drawing someone else's character in a published work. However! I may add a tier where you can have your OC drawn with any of the MMG cast, which is better in a way since you'd get to choose what's happening. (within reason, of course)

Will you be doing all the work yourself, or will you be planning on bringing in more people?
Right now I have someone who will be putting in the flat colors for the comic, and I have a few friends that I brainstorm ideas with. But overall, this project is all mine and I want to be able to do as much of it on my own as possible, if I can help it. But if it turns out later down the line that I really need help, I'll consider my options.

Are you expecting any sort of major roadblocks for MMG?
The main issue is my financial situation. At the moment, it's a bit unstable, so if a financial emergency hits, it hits hard. Another issue would be if my other projects don't finish up as soon as I wanted them to, I really want my old tumblr ask blogs to reach a conclusion but I don't want them to take up the time I need for My Magic Grandpa. If for any reason they don't conclude, I'll just have to make them side projects and it will take longer to end them. I'm trying my best to get them finished up, but I've known from experience that things can and will go wrong sometimes.

Further down the road would you self publish or seek a publisher?
I'm actually going to pitch this comic to a publisher in January! If it doesn't get accepted, I'll just put more work in to providing a better pitch and try again. I'm looking to get it published as an online webcomic, at least starting out, if it gets enough attention then it can go to print.

Is My Magic Grandpa LGBT inclusive?
Absolutely! My Magic Grandpa is all about seeing past differences and learning to cope with and accept not only others, but oneself. Some serious topics will be addressed in the comic, it isn't going to just be fun silly hijinks but a look in to what it means to be human. Sexuality, gender, and race are all things that are embraced in this story, but not as a statement to be inclusive but to show the world how I understand it to be.

How dark is this story going to get?
I know, I'm pretty notorious for dark storytelling, and those elements won't be missing from this comic either. However, this is a story that is meant to show that there are ways out and that not everything is quite as terrible as it might seem. Human nature is a huge theme of the story, many of the creatures are representations of certain aspects of people. There will be topics addressed such as alcoholism, abuse, murder, cults, cattle mutilations... A good way to explain just how 'far', it will not go beyond what shows like Supernatural and Being Human get in to. I still want this to be aimed at young adults.
Now, that aside, My Magic Grandpa still overall is a positive story, it just has dark elements in it. It is meant to be fun, even if things get crazy it will never lose the fun element to it. Starting out the series will be generally lighthearted and will only gradually become more serious as the main character gets older and has to deal with the things that come with being older.
The main thing I can say for absolute sure about this comic: It will pull at your heartstrings in all directions, even directions you might not have known they could have been pulled.


You're all in for a hell of an adventure.

Recent posts by My Magic Grandpa