Get daily backers-only writing tips (Mon-Fri) AND updates about forthcoming books and works in progress. 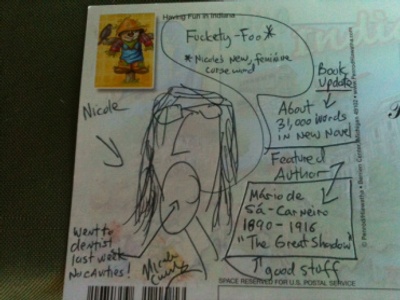 It's back, now exclusively for Patreon backers! Give five bucks a month and I'll send you one of my strange post cards. (With signed doodles, book suggestions, and/or updates on the minutiae of my personal life.)

You'll also get the Daily Writing Tips and regular news updates on my works in progress. 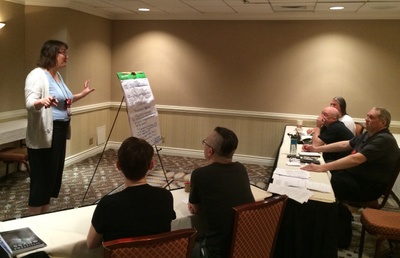 You'll get exclusive access to full episodes of The Nightmare Institute (a series of monthly, 20-30 minute horror writing instructional videos). AND a monthly postcard, with a doodle signed by me. AND the Daily Writing Tips (Mon-Fri) AND news about my forthcoming releases and works in progress.

Hi, I'm Nicole. I write horror fiction and teach writing classes all throughout the U.S.

My first novel,  Mr. Suicide won the Bram Stoker Award® in 2016, and my second novel, A Sick Gray Laugh, was released in August of 2019. Two of my novellas have been nominated for the Shirley Jackson Award, and I have another novella, The Half-Freaks, due out from Grimscribe Press in November of 2019. My work has been praised by Thomas Ligotti, Jack Ketchum, and This Is Horror, among others. Rue Morgue magazine recently named me one of thirteen "Wicked Women to Watch", saying: "her literary output has boasted the sort of fearlessness and tenacity that pushes the genre forward". The magazine also referred to me as "an intense and uncompromising literary voice".
Which is both a great thing and a difficult thing.

It's a great thing, because it means I'm creating the sort of books I've always wanted to create. I've long aspired to move the genre forward. In my fiction, I try to communicate the smell of madness, the texture of the void, the percussion of trauma, and the poetry of decay. I try to capture the essence of how the world, at its absolute worst, really works. (Not because I revel in cruelty, but because I refuse to stick my head in the sand and pretend cruelty doesn't exist.) I have no desire to sugarcoat things and no yearning to conform to the likable protagonist, good vs. evil, happy ending, not-too-smart, not-too-dark aesthetic of corporate publishing.

But it's also a difficult thing, because it means I'm limited to working with small presses. They do a fine job and I'm grateful for them, but they simply can't afford to pay what I need to make a consistent dent in my bills. (Did I mention I'm still paying over $400 a month in student loans?)

So I'm asking for your support. Toss a little cash in the hat and I'll make it worth your while. You can get a Daily Writing Tip (posted Monday through Friday). You can get inside access to news about my works in progress. Stuff I won't share anywhere else. You can get a postcard in the mail from me each month, with a wee sketch and note, signed by me. You can gain access to a monthly series of backers-only horror writing instructional videos I'm calling The Nightmare Institute. (Take a look at the backing tiers for more information.) No matter which tier you choose, I'll be grateful to have you as a backer.