is creating Fate of the Remnants RPG

per Chapter released of the full game

Welcome to our Fate of the Remnants page here at Patreon, where we release the roleplaying game with said name, chapter by chapter, on a monthly basis. We are about to publish our 8th chapter here, and have by then released 250 pages of beautiful, full-color material to our patrons, not including character sheets, maps and digital tools to enrich the setting.

...and get your monthly dose of Fate goodness!

What is Fate of the Remnants? 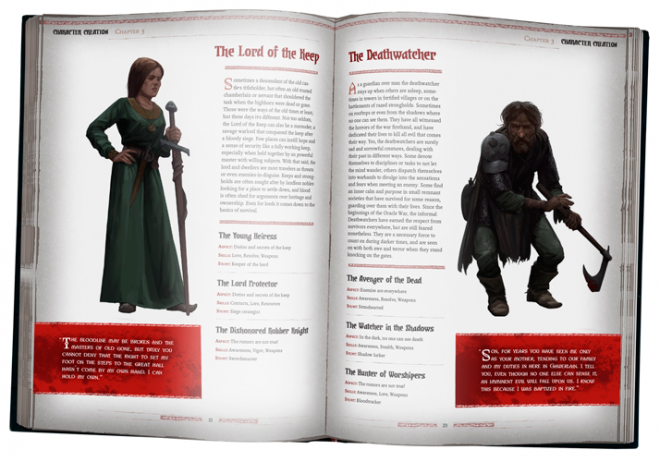 Fate of the Remnants is a dark medieval, post-cataclysmic game, set in a crumbling world, ravaged by the Oracle War. The gods have fallen, after harrowing years when oracles foresaw what was coming. Factions within congregations beset one another and were eventually shattered, and after years of bloodshed their allegiances were blamed and hunted down. In the absence of the divine powers, the Darkness Before has reawoken, ensnaring the weak and meager to do its bidding. The war rages on some thirty years after the foreshadowed but forsworn Godfall, but its stakeholders and driving forces have since long been altered or replaced. The misery is widespread, and matters of life and death set the course of action for most survivors.

Fantasy in ruins: The world that was has ended, and the only option for the remnants is to survive the godless world. Everyone is desperate, and anyone still alive is undoubtedly marked by their experiences. Scarcity in food and shelter is common, and genuinely safe havens are rare to stumble upon.

Unholy and heathen identity: The gods have fallen or have died and cannot help the remnants. Cults of faith are what started this mess in the first place; the cults that follow in their ashen footsteps are perceived as mad and few remnants beyond those cults would look so far into the past for answers, for the only seemingly divine power left is the Darkness Before. Questions arise: Where do we go when we die? And what is a sin if there are no gods to judge us?

Mysterious magic: Magic exists, but has survived only as a hidden practice for centuries, and was before the Godfall been associated with sorcerous deeds and dark crafts. Given that conjunction, it is subject to much superstition and fear. When manifested, magic is either subtle and invisible ﹘ easily mistaken for natural phenomena ﹘ or an unseen but highly desired power.

Eldritch tales: Many mythical things exist beyond what can be seen in the light of the day. Tales of them are passed on by the fireside. Evidence may be found out, but only by the curious. To commoners, these tales of beasts, treasures, curses, and fair folk are much the same, but for heroes and servants of the shrouded Archmages, they hold different value.

If you want to have a closer look, we have published Chapter 1 of the game at our website. 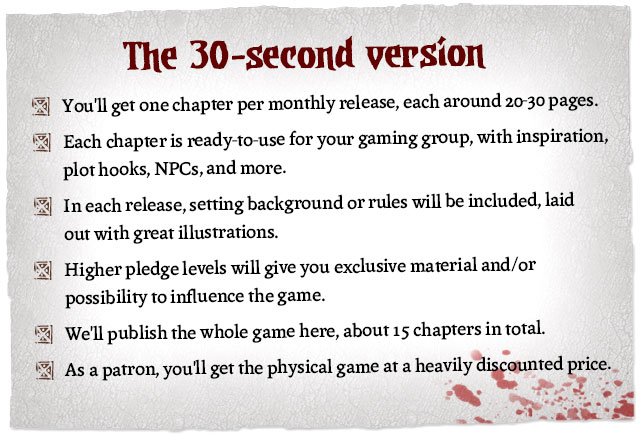 A release summary
We at Obscure Tides are currently producing Fate of the Remnants, a tabletop roleplaying game based on Fate Core rules from Evil Hat Productions. So far, we have released:


Why Patreon?
Our release of Fate of the Remnants here is published with a 'minimum viable product' approach. This allow us to have a steady flow of content coming your way, but it also mean the material is subject to updates and changes. The pro’s will outweight the con’s we think, and makes it possible to inform you about what is happening and a sense of what is coming. At the same time we will be able to collect feedback and input before we turn it into a physical hardcover game.

What you will get
Each release here will be a chapter from the full game, with added content formatted for the Patreon model. With that we mean is that not only is the chapter copied straight out of the game, but you will get a chapter filled of complete content, adjusted to be used right away. Every chapter is either centered around the setting or the rules, and will be fully usable as it is for you as a Fate Core gamer. It will be designed as a separate entity and only not for use as an excerpt or a part of the full game. With one or two exceptions, the chapters will land on circa 20 to 30 pages plus each, beautifully laid-out with art from our amazing artists.

The first few chapters will be designed as standalone releases ﹘ modules you can plug into your own ongoing Fate fantasy games. They will also include content about the setting of Remnants, which we hope will be useful as inspiration, but the initial chapters alone will not be enough to play the complete game. A few chapters in, the bigger picture should become clearer, and we hope players will consider starting their own Remnants games. Once everything is published, we will collect it all, edit it, and release as a complete product. Patreon backers will get a substantial discount on the final product.

Our goal is to deliver a top quality game that will provide you with a rich experience, regardless if you are a GM or a player, but also provide releases here that are usable directly for play. If we reach higher milestone goals, each chapter will either have additional content according to our funding goals, like additional artwork, maps, thematic music, etc., or we will plan to publish separate add-ons for you to enjoy.

EDIT: We have revised our publishing plan, and decided to make the game in 15 chapters, without leaving anything out. Rather, we have decided to pack it better and make the content more accessible and relevant. Initially we said 19 or 20, but that number is out the window :)

Release plan
We aim at a release frequency of one chapter per month. At every release our patrons will receive the chapter as a PDF, and get access to the content on our website. Extras with special requirements in the form of digital tools, maps and so on, might be published with other means if necessary.

Up next:
- Chapter 6: Character Origins - a section with examples of character archetypes and concepts (MAY)

Your funds
Your funds will be added to our existing budget. We will wholly dedicate your patronage to improve this game, and in the end, make it a physical product. Our current goal is to release the whole game here, and the current budget allows already to do so. Your funds here will help us improve the game, and everything here will go back into the game, allowing us to add content and more illustrations. As each chapter may vary in size and content, the amount of fundings allocated to illustrators and writers may vary as well, but our ambition is to find a balance between them. As a founder, I will personally not lift one dollar as commission or salary until the game is completely done.

Once we have released all chapters here, our next step is to make it a physical book. All our patrons from here will, as noted, get it heavily discounted.

Who are we?
Obscure Tides is the label under which Fate of the Remnants is published, founded by me, Christian Svalander. Personally I have been a gamer since the mid 80's, illustrating, writing and designing games here in Sweden since the late 1990's. During my waking hours I try to balance work as a UX Designer at a software company with raising three kids. My background includes years as a chef and freelancer, as well as time working in design and brand agencies. As a part-time freelancer myself (I have a day-job, as you know), most my own capital has been invested into this project since a few years back.

For this I have been lucky to gather a great international team with experience from various parts of the gaming industry that will help realize this project. In total, the team consists of:

- Brie Sheldon, our experienced editor and game developer, from Pittsburgh, Pennsylvania, has worked with Onyx Publishing and Margaret Weis Productions, to name a few.
- Christian Svalander, founder, writer and designer, born and located in Kungsbacka on the West coast of Sweden.
- Hans Binder Knott, concept artist and illustrator from Germany. Nowadays a Münich resident.
- Michael Duxbury, writer and game designer. The team's Fate guru, residing in London, UK.
- Monte Lin, experienced writer, editor and game designer. Previous work includes projects at Fantasy Flight, Wyrd Games and the mobile video game industry. Lives in San Francisco Bay Area.
- Per Folmer, a concept artist and illustrator with a fine arts background. His work can be seen at most RPG publishers in Sweden. Also from Kungsbacka, Sweden.
- Sam Carr, character concept illustrator with long experience from global game companies such as Applibot, WotC and Volta. From UK, but lives these days in Berlin, Germany.
- Tomas Muir, an American/Portuguese/German concept artist and illustrator based in Portugal. Specializes in fantasy art. Is also an avid gamer.

Hope to see you soon!