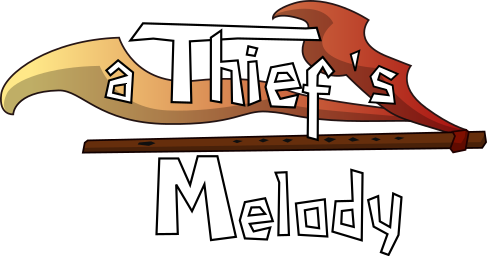 Creation of a video game

Hi! My name's Mat and I'm a crazy French guy creating video games! I've been working on my own 3D adventure video game since 2013.
" A Thief's Melody" is a 3D cartoon adventure/stealth game with a contemplative atmosphere. It features exploration, dialogs, fights, puzzles, collectibles and huge Boss battles, among other stuff. In an ocean-covered world, you play a young thief studying at the Guild:
• Learn various skills: climbing, stealth, fight, bow, bombs, grapple and much more !
• Confront or avoid pirates, guards and robots
• Freely explore a cartoon open world
• Collect gemstones, paintings and flowers
• Cure ill animals all over the world
• Defy giant Guardians during epic battles
• And ride a cool turtle...

If I have to point a few references, I would say it's between "Zelda" & "Beyond Good and Evil". I do everything from code to art & music because I love that! Don't hesitate to visit the official website to play the demo and get more info about the game: http://www.oneiricworlds.com

You can also check out the trailer to see how it looks:

While creating this game, I also share my experience about art creation & game development in various ways: videos, making-ofs, conferences, blog articles or step-by-steps... I like to share what I learn, because I learnt a lot by watching other people do stuff!

But right now, my savings are getting low and I need to take other jobs to pay for my roof and food, which means much less time available to keep working on the game. That's why I decided to start a Patreon campaign!

There are very few game developers on Patreon because video game creation has an EXTREMELY LONG development time (at least the kind I do). Here, we are talking about years of full-time work to get the job done. That's why I chose a monthly pledge, to be able to keep working on the game(s) on the long run. Even after "A Thief's Melody", I have plenty of other projects in mind to keep creating cool video games! So many that I already know that my whole lifetime will not be enough.

If you support me, you'll get access to the final video game at a special price (among other stuff). This will depend on various things and I don't know the final game price yet, but of course, I'll take into account all of your past pledges. So, if you already gave me more than the final price, you'll get the game for free when it's released. Thus, you can see the donation as a credit pre-purchase of the game with additionnal bonuses (level testing, sneak peeks of in-progress works, Q&A, live streams, ...)

In all cases, I'll keep sharing most of my experience for free. So lots of my tutorials & articles will be accessible to everybody, even non-patreon people. This means that, by pledging, in addition to the rewards listed below, you kindly contribute to knowledge-sharing for everyone, and maybe this will help other people (including yourself?) start creating awesome things somewhere in this world.


And if you want to help me in other ways than financial support, don't hesitate to talk about this to your friends and family, or follow me and share the news on the following social networks:

Thanks A LOT for your help