This subscription level gives you;

· Exclusive access to each episode sent directly to you.

· The ability to save each episode with access to a downloadable file.

acknowledged as supporter within all website pages and emails.

Be involved in the production and as an Executive Producer you'll be listed in the credits as well as within the online description of each episode of Stories Of The Great Southwest. What's great about this is when people google your name, these documentaries will come up.

Since this is a permanent addition to each episode we will require a commitment of one full year. The good news is that 25 years from now your name will still be connected to the series.


For over 14 years Overtime Studios has been telling the stories of the people of Southwest Saskatchewan through its award winning media outlet Southwest TV News. With over 1,400 episodes produced, the world has been introduced to the people and historical events of this region.

Throughout our travels, we’ve had the privilege of meeting a variety of interesting individuals; from politicians to athletes, artists to entrepreneurs, everyone has a story to tell.

During the last several years, we've also produced a number of historical documentaries as well as some very personal stories. 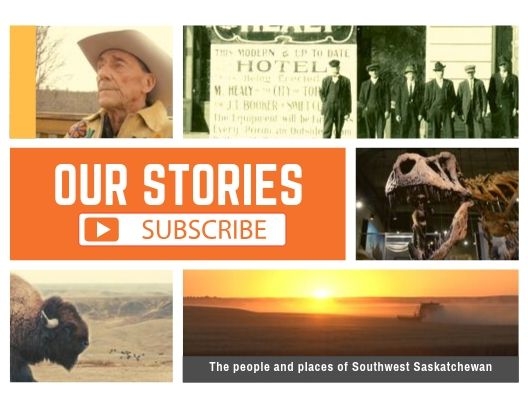 Over the next year, we plan to create several mini documentaries as part of a new series called Stories Of The Great Southwest.

It will celebrate the people and places of the vast and iconic region of Southwest Saskatchewan.

Join us as we tell epic stories about the Largest Trex in the World, The Legacy of the Maple Creek Cowboy Poetry Festival, The Pioneers of Oil Country, The History of Nekaneet First Nations, plus other stories that showcase the achievements and contributions of outstanding individuals living in Southwest Saskatchewan.

Whether you're a local person who sees the value of preserving iconic local stories or someone who finds the landscape and the people of Saskatchewan exotic. We want to share these stories with you.

Our Base Subscription Includes :

- A premium product that rivals broadcast TV.
- Exclusive access to each episode sent directly to you.
- A downloadable video file that you can keep.

For complete details on the different levels of subscription, check the information in the blue boxes to the right.

Below are some selected examples of previous documentaries of the Stories Of The Great Southwest series we've produced.


The Story of Grasslands National Park


The History of Blowtorch the Mechanical Horse


The History of Hockey


The Story of Cypress Hills

We've been fortunate that a number of these projects were produced using standard budgets accepted in low budget documentary film making. Anywhere from $5,000 to $15,000. It's our hope to continue this tradition as we ask for your support in helping to achieve our financial goal.

We would like your support in helping to create 12 mini documentaries over the course of the next 12 months as part of The Stories Of The Great Southwest..