$1
per month
Join
+ You will get access to activity feed where you will see the latest news about the game, including screenshots.

$3
per month
Join
+ All of the above.
+ You will get a few wallpapers every month.
Includes Discord benefits

+ You will get access to the newest copy of the game.

About P and P

Lily of the Valley

What is the plot about?
The story revolves around two young people, Lily and Nick, who, recently got married. Led by immense love, they decide to start their life together living temporarily in Fred's (Nick's father's) house. Their plan seems simple at first sight. All the money they would spend on the rent, they will save up for the dream they've had since the moment they met, and that is to buy their own place.
But, just as in real life, things are not as perfect as we plan them.

What makes us different than the others?
A real life story! To be more precise, since the very beginning we have been working on the plot that could (easily) happen to anyone in real life. We offered Lily various paths. Nonlinear paths where you, the players, can choose the way their lives will go on.

The characters. Each character has its own life story. We create them with a lot of attention and we try to make each of them act and think differently. Some are serious, some are strict or cunning, whereas some are funny or too clumsy. What they all have in common is the fact that none of them is unchangeable, but very flexible, depending on the path the game goes. That, of course, counts for our main character-Lily, too.

Choices. In this one, choices actually matter. So far, every choice in the game has had its meaning. You should know that even the little ones, you might think won't matter much, get recorded and that they can greatly influence the rest of the game. We pay a lot of respect to nonlinearity, and that is why you need to be aware that, in some days, not necessarily in all of them, you won't be able to go through all the scenes in just one day.

Body, Stamina, Intelligence. Lily is designed to be changeable in every single way. The system changes her body depending on the number of trainings, her intelligence increases depending on how much she reads, and her stamina limits the number of quests she can do per day. It's important to mention that training or studying every day doesn't have to bring change. A certain time span is necessary for her to upgrade.

Animations, renders and game mechanics. Every render starts with a "T" pose. What does that mean? Simply said, that means that we don't use default poses, but, we load in every character from scratch and we shape every single joint of theirs. For example, just one hand has fifteen joints. Same goes for even more complicated animations, some of which contain more than thirty renders. Everything is manually set up, including every prop in every scene. As for the code, it is pretty unique, too. This is one of the first games where animations are connected to and cooperating with texts.

Overall, our goal is, to leave the impression of an authentic game experience we are certain is different than any other, through the highest quality and ever more realistic content.

How much content have we created so far?
Honestly, it is very hard to determine the number of hours needed to go through the created content. We roughly calculated that there is enough content for eight hours of playing without loading a specific day to see all the scenes.
But, I can precisely say that, so far, the game contains 1287 Cg-s and 77 (1543 Renders) animations, which makes a total of 2830 renders. 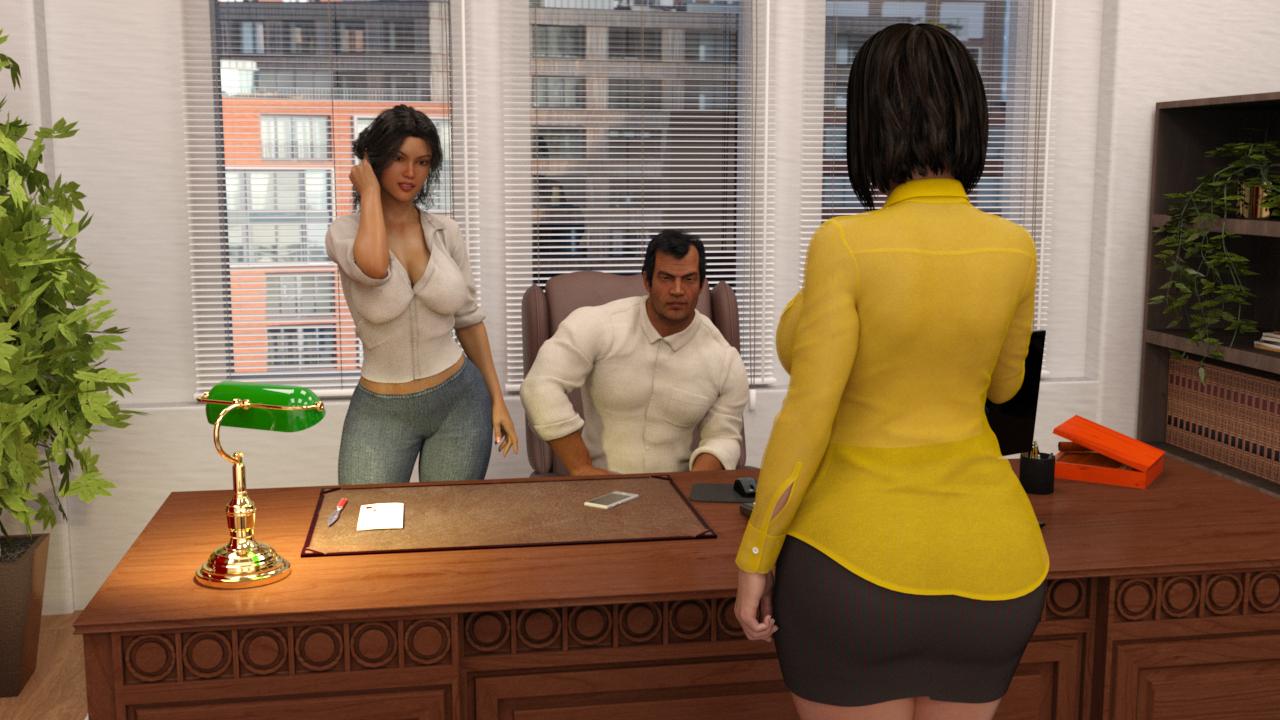 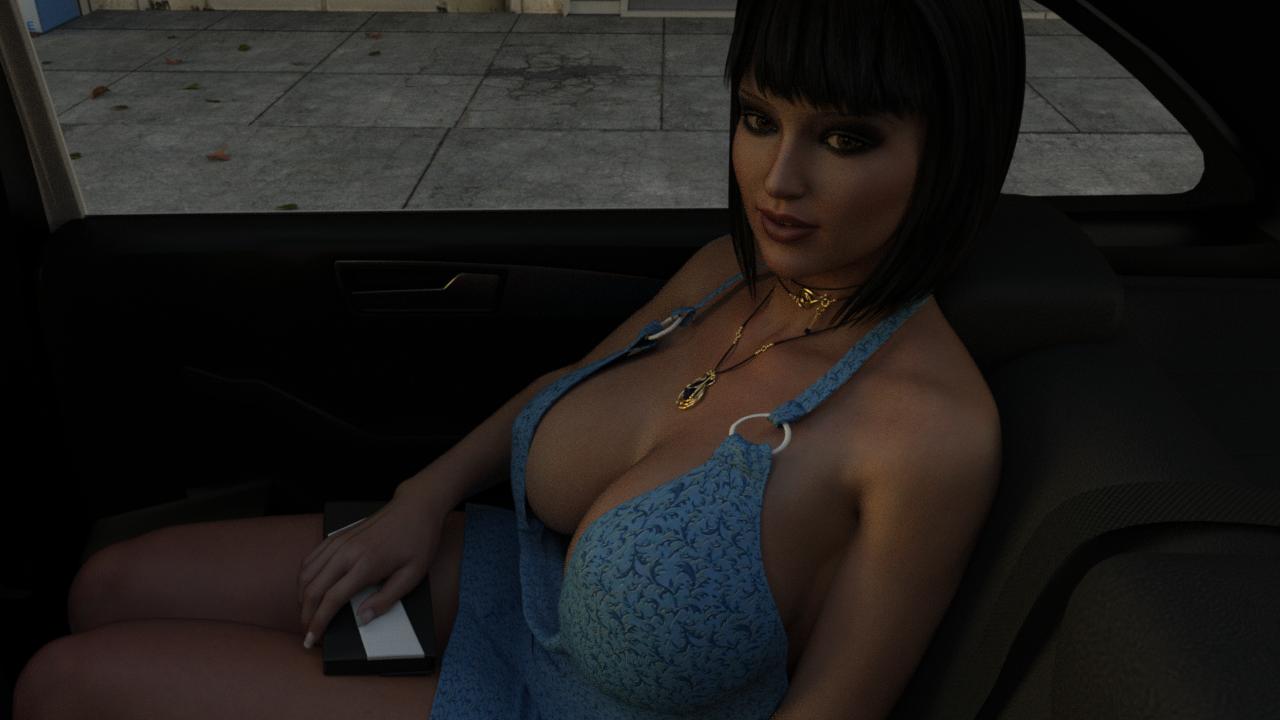 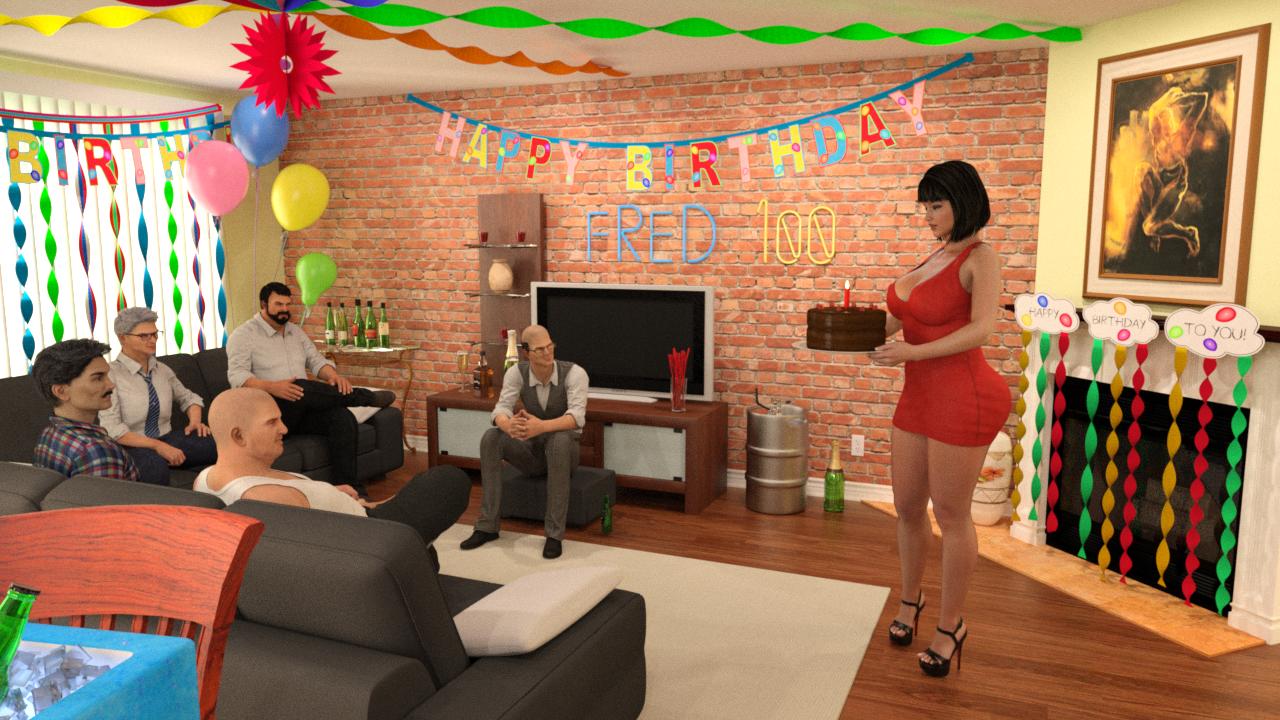 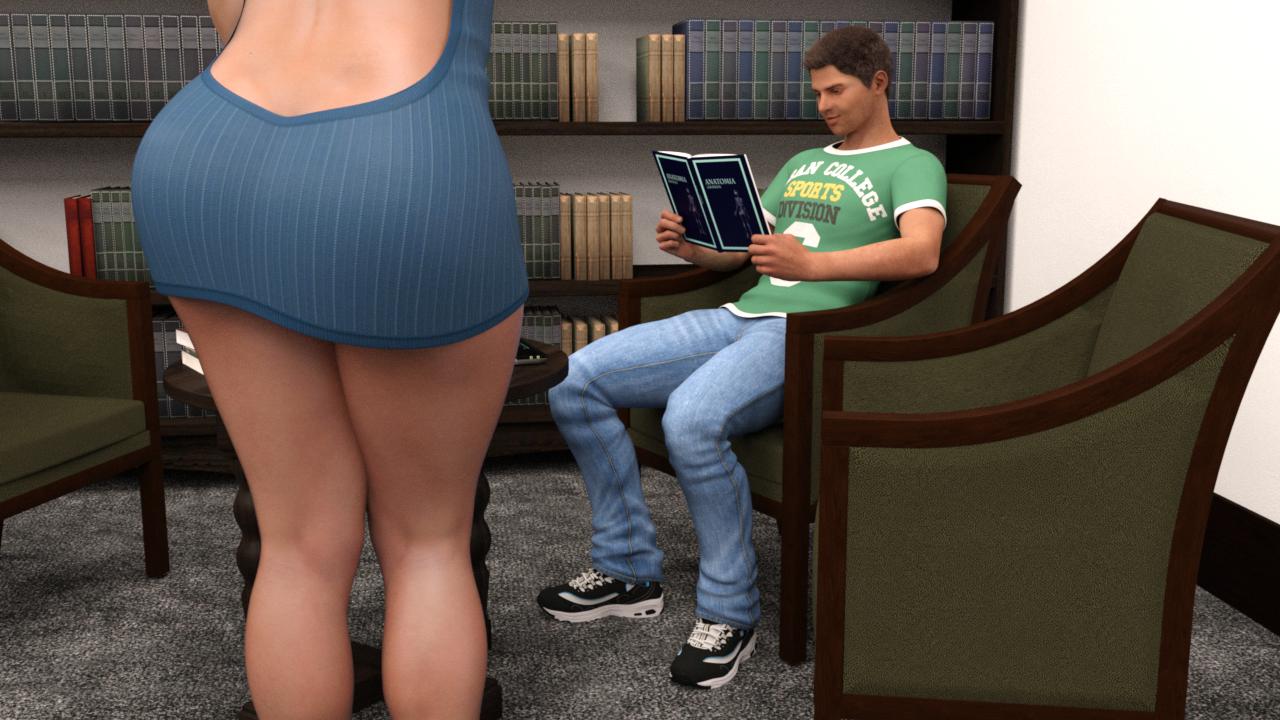 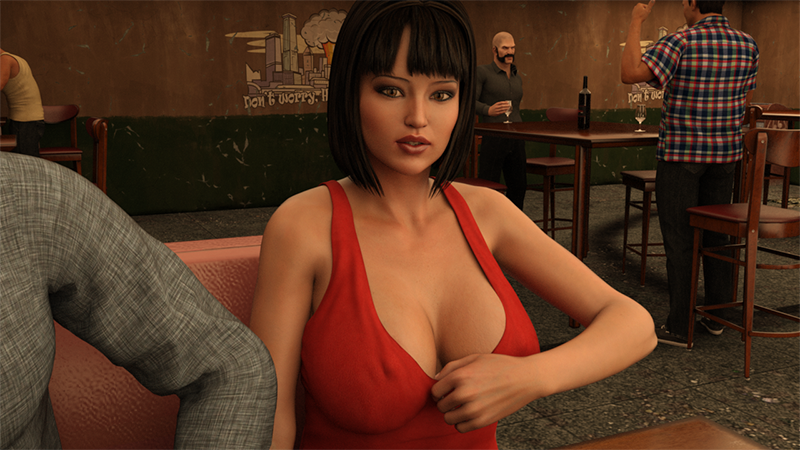 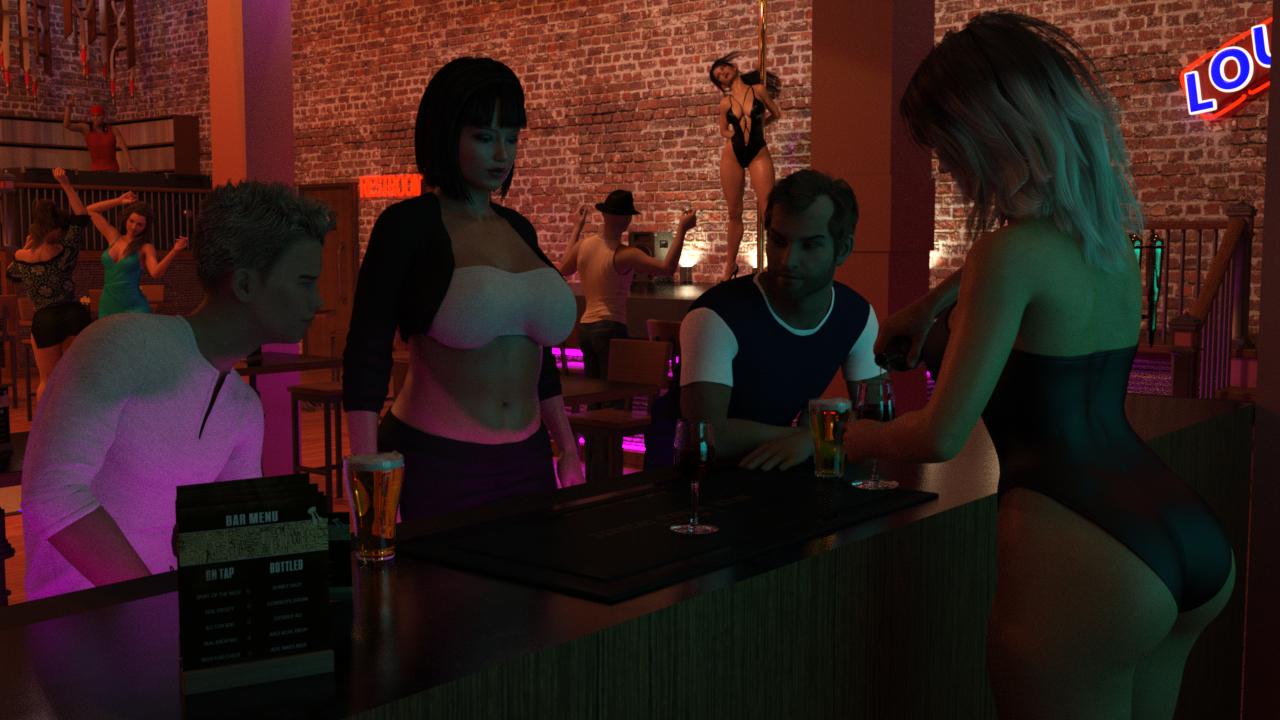 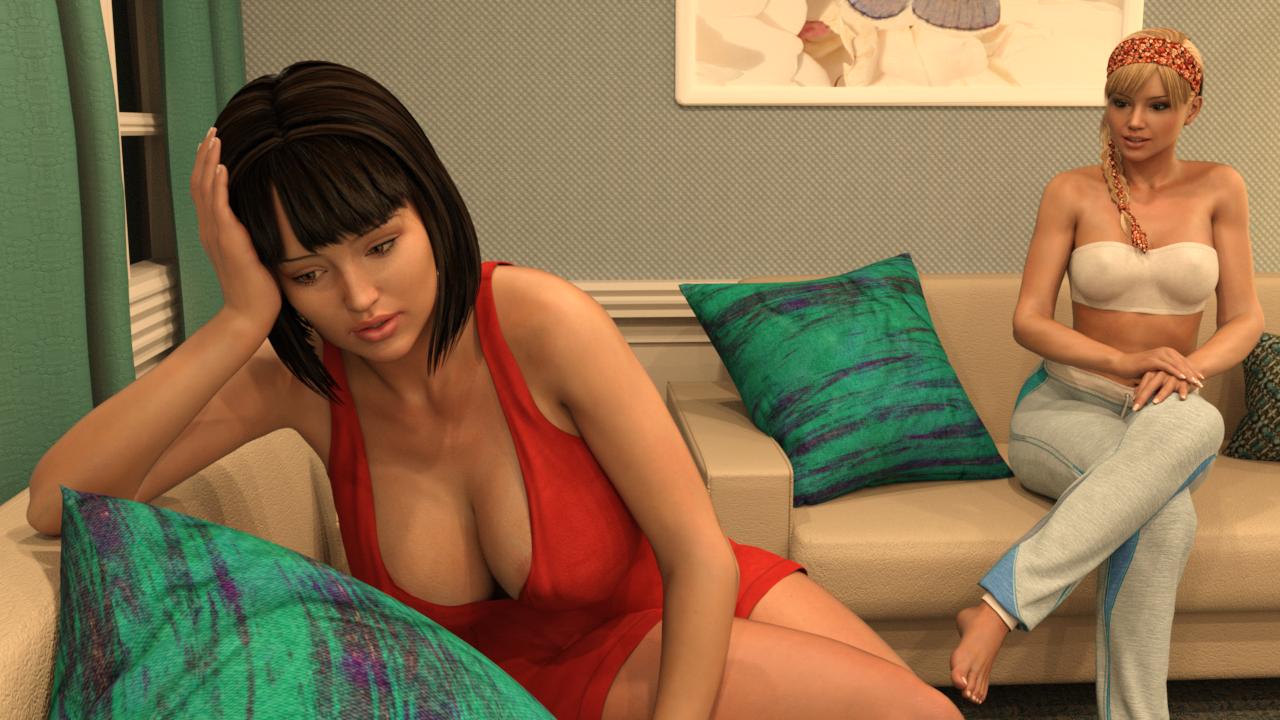 Who are we?
My name is P. I don't know if I could give myself so much right as to call myself a writer, but, basically, I am responsible for every single word in the game. Together with my partner P, I create characters, and I make sure each of them is different and unique. I've been in the adult world for more than eight years, and with my experience I try to make usual and common things interesting in this game.

His name is P. He is pretty much responsible for everything else. After planning the "rough scene" together, which means planning every single render in that scene, the stage is his. He creates renders, animations, coding and maps. With more than five years of experience in a successful IT company, using his knowledge, he manages to make everything extraordinary and precise.

Is there anyone else on the team?
Yes. His name is V. He is responsible for translations and corrections of everything written, since English is not our mother tongue. In addition to having a BA and MA in English language and literature, he also has an MFA in Film and TV production which makes him uniquely qualified for this position. Having studied screenwriting and editing at university, he understands dialogue and story structure very well and I don’t even have to emphasize how important that is for our game. What I think is the best part about having him on our team is that his translations manage to retain the flow and life of the words that I write, and that is very hard to do when you go from one language to another.

Could you update more often?
Definitely, yes. However, we both have families, which is why we spend most of our time by the phone when we work on this project. But, recently, we've come up with the idea to rent a place where both of us could work together. We've also agreed to have that as our next patreon goal because we think that will significantly improve the updating process.

What's the dream?
This one's easy. To fire our bosses, of course. Who knows? Maybe one day our dream becomes reality.

Why Patreon?
Patreon is an amazing platform which keeps the wind at our back, and enables us to buy everything we need to make this game. Computer components, scenes, props, tilesets, and, of course, translation. Every time someone pledges, regardless of the amount, patreon assures us that we did something right. For us, Patreon means respect. If you can afford it, and you appreciate our work, we will be more than thankful if you press that magic red button.

Recent posts by P and P