is creating Pastor Stephen Grant and related thrillers and mysteries

$4.99
per month
Join
You receive all new novels FREE and two weeks earlier than the rest of the world, and you get FREE exclusive, early reads of new Pastor Stephen Grant short stories throughout the year. In addition, your name included in a special "Thank You" section in forthcoming novels, and access to the private Pastor Stephen Grant Fellowship Facebook page, which includes daily journal entries from Pastor Stephen Grant, insights from other characters, regular recipes from Grillin’ with the Monks, periodic videos and Q&A’s with Ray Keating, and more!

$9.99
per month
Join
All the benefits from the above level, plus you receive two special gift boxes throughout the year with fun and exclusive Pastor Stephen Grant merchandise.

Book of the Month Club 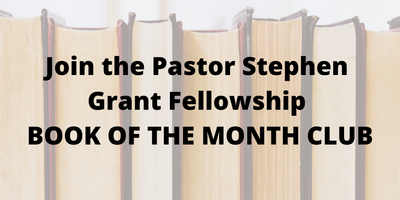 $19.99
per month
Join
NEW! This is the BEST VALUE. Check this out: 1) Receive a FREE book EVERY MONTH written and signed by Ray Keating. Included are Pastor Stephen Grant thrillers and mysteries (new books in the month of release), other fiction books, and Ray's nonfiction books. If you request, Ray will personalize his signing to a person of your choosing. 2) Two special gift boxes throughout the year with fun and exclusive Pastor Stephen Grant merchandise. 3) Your name included in a special "Thank You" section in forthcoming novels. 4) Access to the private Pastor Stephen Grant Fellowship Facebook page, which includes daily journal entries from Pastor Stephen Grant, insights from other characters, regular recipes from Grillin’ with the Monks, periodic videos and Q&A’s with Ray Keating, and more!

Please consider joining the Pastor Stephen Grant Fellowship to enjoy more PASTOR STEPHEN GRANT and related novels and new short stories, to receive special thanks, to gain access to even more content, to get special gifts, and perhaps to even have a character named after you, a friend or a loved one.

The support and encouragement that I’ve received from readers since WARRIOR MONK, the first PASTOR STEPHEN GRANT novel, was published in 2010 has been an unexpected and treasured experience. My appreciation only has grown with the positive feedback passed along with each subsequent book I’ve written and published. Thank you very much.

Stephen Grant – the onetime Navy SEAL, former CIA operative and current Lutheran pastor – and the remaining cast of characters, including family and friends from his church life as well as former colleagues (and much more!) from his CIA days, seem to have struck a chord with many readers. I’ve also heard from various reviewers and readers that these thrillers and mysteries are not your typical Christian fiction, and that they offer a nice balance between action, suspense, faith, humor, intrigue, romance and adventure. My mission, if you will, is to create novels that offer compelling stories and interesting characters, are fun to read by a wide audience, and embrace and reflect a Christian worldview without, well, hitting people over the head with wooden earnestness.

It’s been a fun ride for me, and I hope for readers as well. In fact, my only frustration has been finding ways to write more! I have ideas outlined for additional PASTOR STEPHEN GRANT novels, an assortment of short stories, a spinoff series, and more.

To make this happen, I’m turning to you – the readers, including so many that I’ve come to know a bit through social media, book gatherings and signings – for help via Patreon.

I’ve always said that I’ll keep writing as long as someone wants to read what I write. Thanks to reader support from this Patreon effort, I will be able to pen more PASTOR STEPHEN GRANT and related novels, while also generating short stories, other fiction and nonfiction books, reader guides, and other fun material. At various levels of support, you can become an essential part of making this happen, while getting to read everything written before the rest of the world, and earning other exclusive benefits – some that are pretty darn cool!

Again, thank you for your support. If you have enjoyed reading the PASTOR STEPHEN GRANT novels half as much as I love writing them, then I’ve managed to create something worthwhile. The fact that you spend your money and time on my books is both humbling and encouraging.

So far, Ray Keating has published the following PASTOR STEPHEN GRANT adventures (with more on the way!):

1. About REAGAN COUNTRY, Kirkus Reviews declared, "Keating has accumulated an impressive assortment of characters in his series, and he gives each of them ample opportunity to shine... As in the preceding novels, the author skillfully blends Grant's sermonizing with intermittent bouts of violence. It creates a rousing moral quandary for readers to ponder without either side overwhelming the storyline. Tight action scenes complement the suspense (uncertainty over when the next possible attack will be)... The villains, meanwhile, are just as rich and engrossing as the good guys and gals. The familiar protagonist, along with sensational new and recurring characters, drives an energetic political tale."

2. Kirkus Reviews offered a stellar review of LIONHEARTS: "In this seventh entry of a series, terrorists attacking Christians in the United States must contend with the proficient recurring protagonist armed with Scripture and a Glock… By now, fans of Keating's … thriller series will anticipate skillfully drawn characters. [Stephen] Grant, for one, is a considerate husband and unquestionably capable in action… The narrative's swift momentum is retained even during profound moments, like a scene in which terrorists debate their cause after murdering two men that's intercut with clergymen reciting biblical passages. Though sequences of Grant or [Paige] Caldwell and her team engaged in combat are exhilarating, the story's brimming with everyday heroes. One political figure, for example, is rescued by a neighbor whose courage is measured by the hefty Desert Eagle gun he brandishes. First-rate supporting characters complement the sprightly pastor, who remains impeccable in this thriller."

3. Pastor Rod Zwonitzer, the retired host of KFUO radio's BookTalk show, says about LIONHEARTS: "Keating builds on solid theological ground in all his novels and this is no exception. In this novel, a homegrown radical jihadist scheme that attacks soft US targets creates the scenario into which Grant and his cohorts enter to produce a highly charged mystery train for the reader to ride with anticipation to the outcome. Again, I recommend to prospective and veteran Pastor Grant novel readers, 'Ray Keating is a great novelist!' Thanks Ray and let's go for a least a dozen in the series."

4. About WINE INTO WATER, Kirkus Reviews says, "A first-rate mystery makes this a series standout…"

7. Kirkus Reviews also gives a big thumbs up to THE RIVER: "A gritty, action-stuffed, well-considered thriller with a gun-toting clergyman."

8. THE RIVER: A PASTOR STEPHEN GRANT NOVEL was a KFUO "Book of the Year" finalist in 2014.

9. From a Washington Times review of THE RIVER written by a pastor and former CIA officer: "What Ian Fleming's 007 series has probably done for ex-MI-6 agents and Tom Clancy has done for retired CIA officers, Mr. Keating has done for the minority of former CIA agents who have served their country by working in the intelligence community, but now wish to serve God."

11. A Touchstone magazine review of MURDERER'S ROW says: "This is a fun read, though the embedded theology is real and salutary. There is death and life, adultery and commitment, friendship and betrayal, violence and victory over violence… Perhaps the best part of the book for the reviewer is that the clergy are good at helping people bring Christ into their vocations."