Notes from the Shed 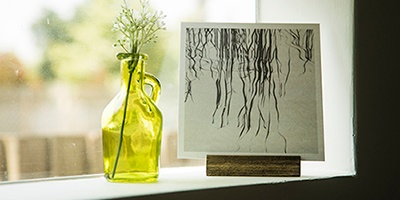 $12
per month
Join
or save 10% if you pay annually
An autographed print of one of my original photographs and/or an original postcard and the occasional bonus item mailed to you each month. Your welcome gift comes with a SILENTIUM ET LABORA sticker, a pack of 5 unique prints and a 3.5" wood stand you can use to display prints on your desk. Also includes all previous rewards.

I'm a filmmaker + photographer + writer interested in the intersection of work, contemplation, and how one should live, creating work not as a depiction of the thing, but work that *is* the thing.

Over the course of my filmmaking career, I've gravitated towards the existential. My films have become a means for me to work out an existential problem or exercise a particular part of my being which I feel will have benefit to my life and those of others.

My existential yearnings began in my early teens, but they adopted a new framework when I started making films. My first feature-length offering, Flight from Death (2005), examines our awareness of our own mortality as a root cause of human behavior. The combo of the deep existential dive and the art-making was eye-opening and I wanted more, much more. Fast forward to my fourth film, In Pursuit of Silence, which was released in theaters all over the globe between 2016-2018. Through the lens of silence, my entire perspective on work and how it intersects and interacts with my life expanded and deepened in ways I never could have imagined. In monastic traditions there is no delineation between work and contemplation. The work is the contemplation and the contemplation is the work. Each breath and movement of the body is an opportunity to engage in the only work that matters, namely, that of transcendence or as Susan Sontag called it, "spirit-seeking."

My notebook of project ideas is massive and grows by the week. I started this Patreon account as a way to sort through those ideas, explore them, workshop them, and bounce them off a community of supporters. I'm not interested in adding more to the noise of our lives, of your inbox. You can be sure that everything I send your way will be thoughtful and carefully curated. Along the journey, I'll be sharing things of all sorts, including but not limited to microfilms, sound recordings, photography, essays, dailies, rough cuts, deleted scenes, and noteworthy discoveries from conversations, literary and creative explorations, and the like.

Patrick Shen is a filmmaker and the founder of Transcendental Media. Patrick’s cinematic works include the award-winning films Flight from Death: The Quest for Immortality, The Philosopher Kings, La Source, and the SXSW 2016 film, In Pursuit of Silence. His films have received 24 awards and 11 nominations, and have been featured on the TED blog, CNN, Huffington Post, NY Times, LA Times, Boston Globe, and the Washington Post. In 2009, Patrick was the recipient of the Emerging Cinematic Vision Award from Camden International Film Festival and since 2005, he has presented his work at hundreds of film festivals, cinemas, museums, and major academic institutions all over the globe including SXSW, CPH:DOX, Sheffield Doc/Fest, Full Frame Film Festival, USC School of Cinematic Arts, the Smithsonian, The Hammer Museum, NYC Museum of Natural History, Princeton, and Harvard University. In 1999, Patrick was invited to the White House to meet with President Clinton in recognition of his work on the Emmy-nominated documentary We Served With Pride. Since 2012, Patrick has been lecturing and teaching filmmaking workshops all over the globe as a film envoy for the U.S. State Department and the USC School of Cinematic Arts for their American Film Showcase. Patrick recently co-authored a book set to be published in 2018 titled, Notes on Silence and is currently at work on a new slate of films which include two experimental works, In Praise of Shadows and Four Minutes.