Skip navigation
We use cookies to improve your experience using this site. More information
Become a patron
May 20, 2017 at 7:59 PM
Small Game: The Farrier
Hi people!

I said during last month's update that I was planning to skip AdventureJam this year, but circumstances conspired to allow that to happen, and so I can now present a super rough version of The Farrier, a game about dinosaur foot care and having a good relationship with animals.

Builds for Linux, Mac and Windows are up on GameJolt for anybody who'd like to check it out! 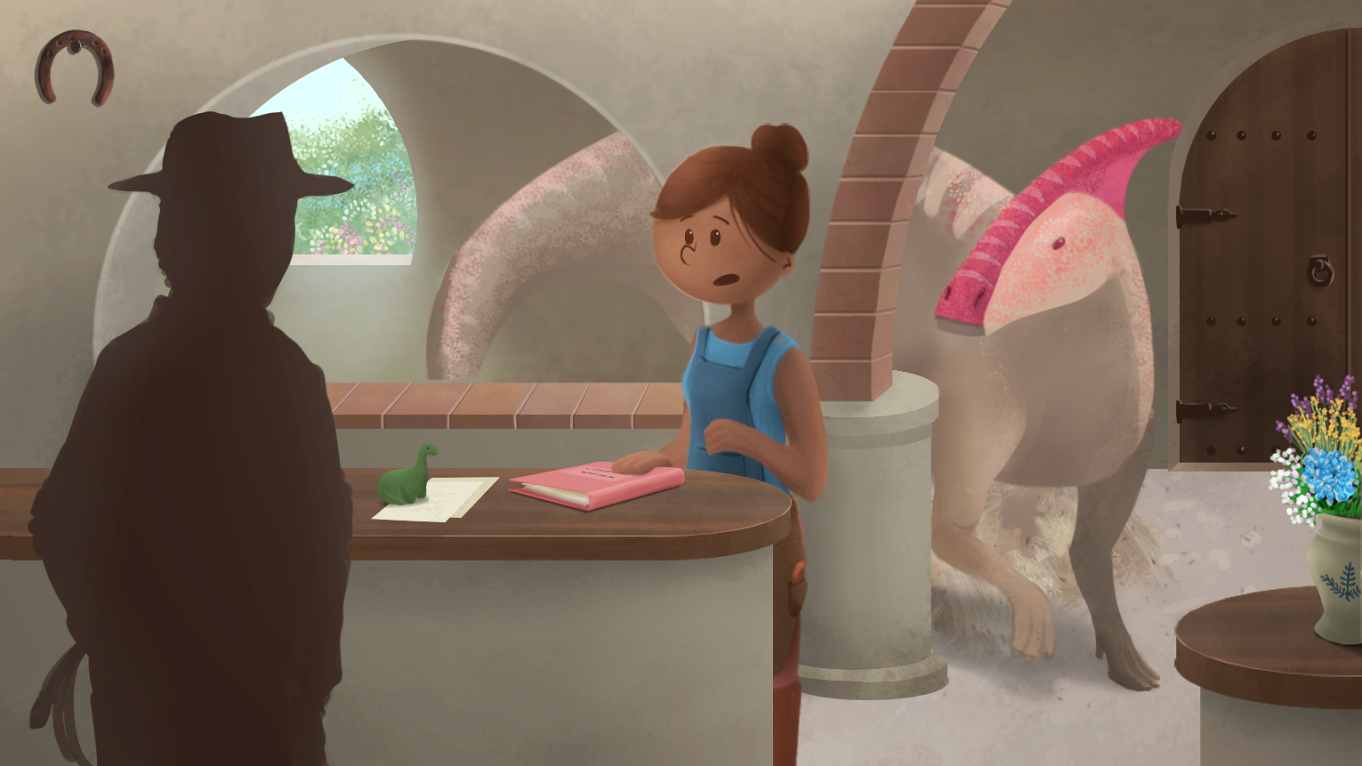 Other commitments and contract work collided directly with AdventureJam's start date, and so I decided that once again, I'd have to give it a miss. Hearing this, a couple of friends (who are also wonderful Patreon supporters <3 ) offered to collaborate.

AdventureJam's rules allow for writing and game design work to be started ahead of time, so I figured that we could make it work if I front-loaded all the design and planning work ahead of the jam's start and then took on an overseeing role across the event instead of contributing directly.

Flesk was to look after coding and implementation and kednar was going to take care of art. Along the way, milan joined to assist with writing and Michael offered to work on some audio, but was unable to contribute. Unfortunately, all of us ended up being waylaid by external commitments and concerns. Moving house, lack of internet connectivity, working unexpectedly long shifts, and illness assailed out tiny team.

In my initial concept/design work, I scoped out a modestly sized point and click adventure game centred around a solitary dinosaur farrier who discovers she can talk to dinosaurs. Knowing that it'd be a challenge to accomplish in two weeks even if I was able to dedicate full time attention to it, I pared that down to a two scene treatment that focused more directly on the process of learning to understand dinosaurs.

The mechanic I wanted to explore involved repeating previously heard dinosaur sounds to "learn" them, and then hearing those sounds again once "learned" to "understand" them. While that doesn't realistically reflect the process of learning new languages and concepts, its two-step approach feels like it rewards opportunistic play through vocabulary expansion and focused play through pursuing comprehension. Some inspiration for this came from The Secret of Monkey Island's sword fighting mechanics, where insults could be accumulated easily, but finding the responses for them required more direct action and persistence.

It was important to me that players be able to discover this organically, so I came up with a narrative framing that presented "soothing words" as being an important part of caring for animals. The notion that strong bonds and trust can arise from vocalisation without necessarily having linguistic understanding feels nice and resonated with the idea of dinosaurs speaking in abstracted concepts rather than words.

I designed the foot care mechanics to be fairly simple use-the-right-tool-on-the-right-injury type interactions with the aim of making the work feel mundane, potentially chained together to emphasise significant injuries (eg: wash a wound, stitch it, apply a poultice and then bandage).

In the minimal two-scene version that we had planned, I wanted to slowly expose a narrative where a town food shortage provided clues that when combined with the insight and knowledge of the protagonists' patients, revealed a hidden herd of dinosaurs that players could choose to alert townsfolk to, or to not. The real shift was to happen within the protagonist's character, beginning with discovering that they can talk to dinosaurs, and culminating in their having an opportunity to make decisions that impact significantly on the lives of the characters around them.

Of course, things rarely go to plan and thanks to the hurdles mentioned earlier, we ended up cutting things down even farther. I did a lot more programming than I was expecting to do, and with the reduced scope, a lot of the writing I'd been doing worldbuilding for became redundant. Still, it was a fun project to work on, and I hope that my team feels proud of their work! Even without all the bells and whistles, I think there's something interesting hiding at the core.

If you've read this far and are still excited, I'll reward you with my concept notes and some of the artwork I made for the game (most of which ended up being concept stuff that kednar used to inform his awesome final art - I think the logo/splash screen was the only art of mine in current builds). 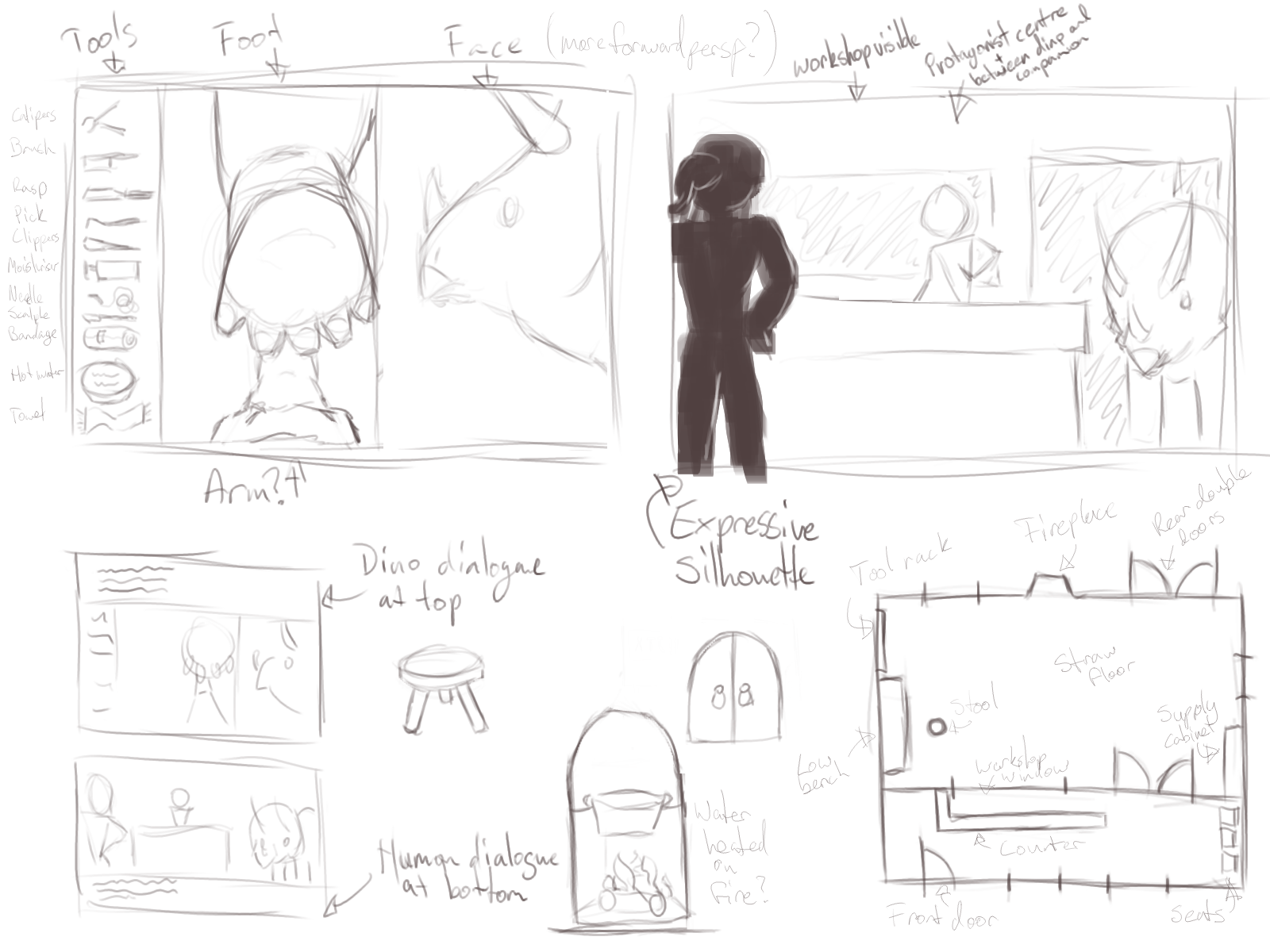 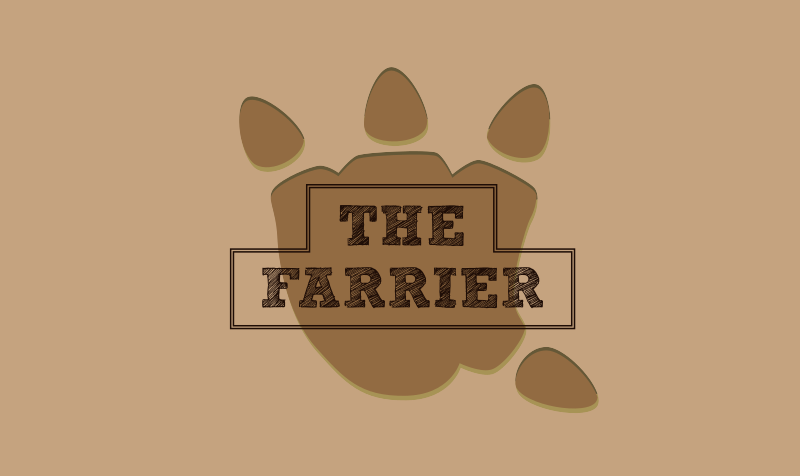 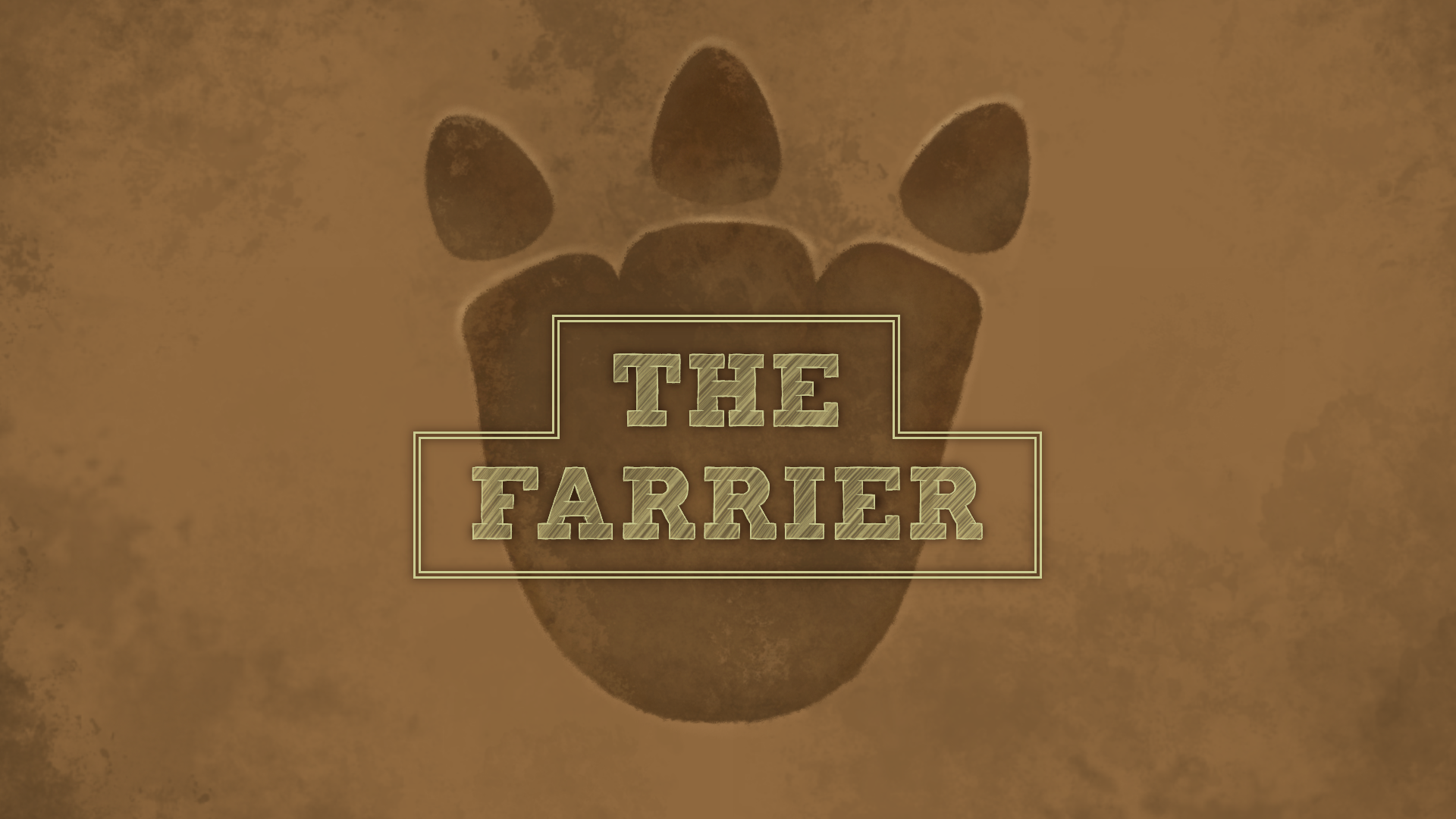 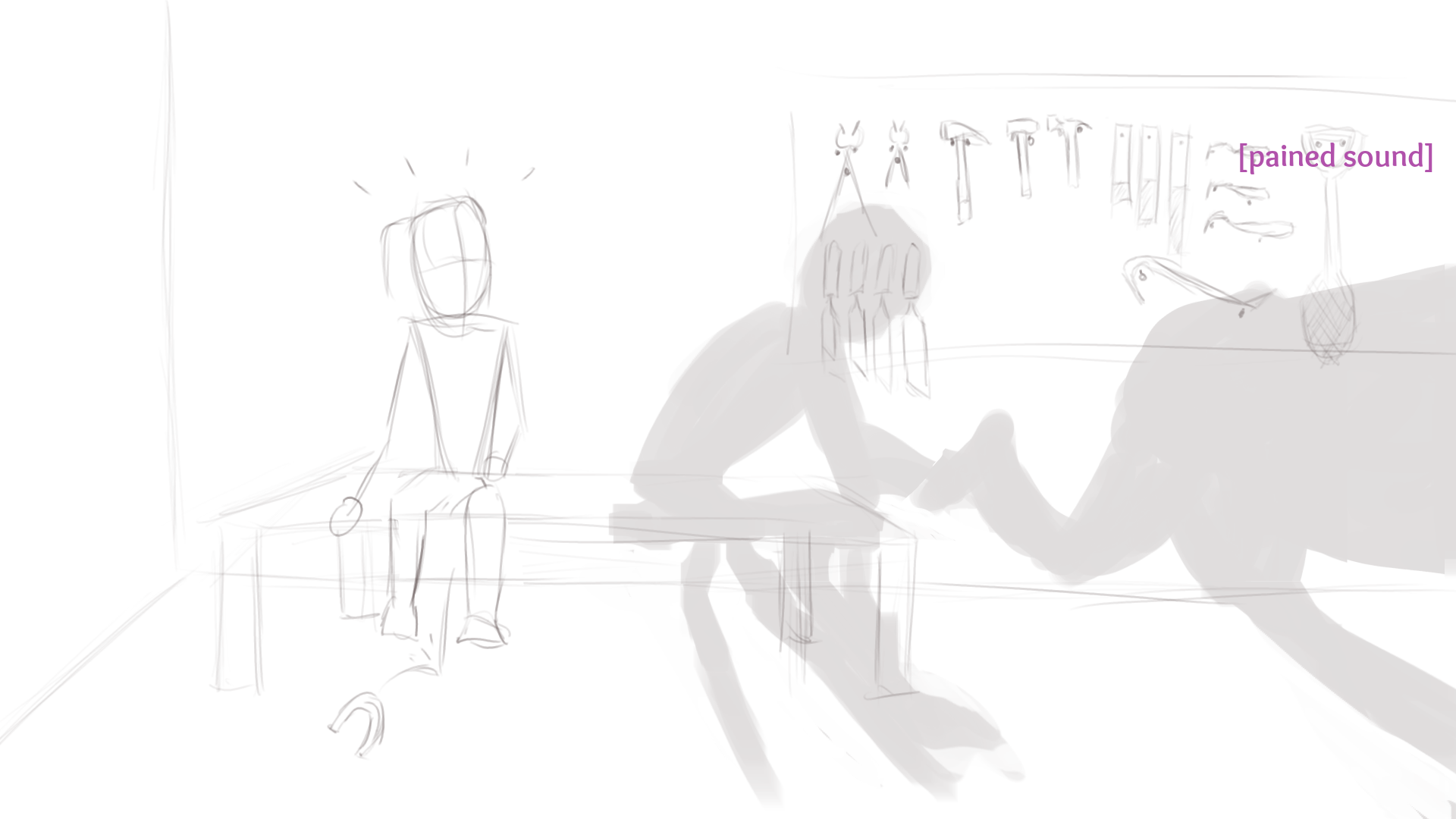 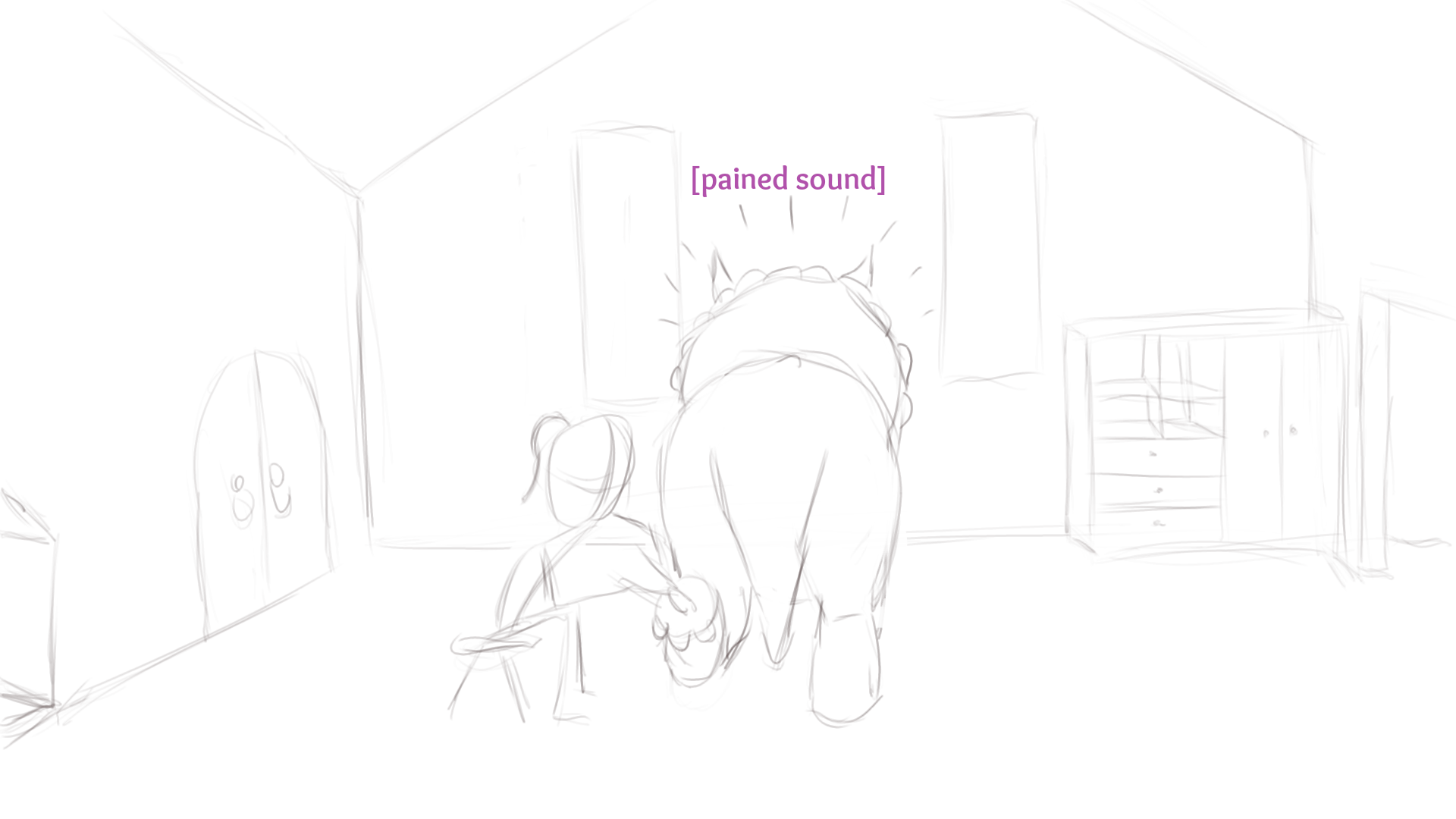