Skip navigation
Become a patron
Mar 22, 2018 at 7:27 PM
Glucose dynamics during prolonged fasts
This is a somewhat complicated level of metabolism. Which tissues are producing what & how much, what are they burning & how much, etc., etc...

After a few weeks, things begin to level out -- we'll pick it up there. Much of this is from a class I TA'd for in grad school, this book, and all the Cahill studies.

"The rate of glucose use at this time is around 90-100 g per day [remember, this is starvation, so all of that glucose comes from gluconeogenesis]. Of that, about 40 g is recycled via the Cori and glucose-alanine cycles and the remainder is 'new' glucose, ~18 g from glycerol and ~45 g from amino acids." 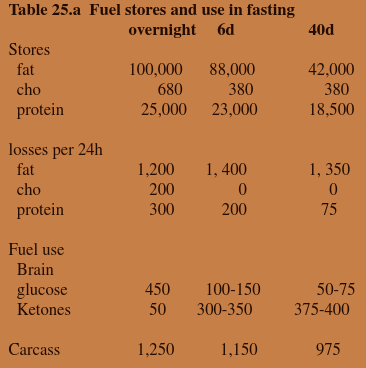 "To maintain this rate of proteolysis (supplying amino acids for gluconeogenesis) would still require the breakdown of about 100 g protein (amino acids) per day." 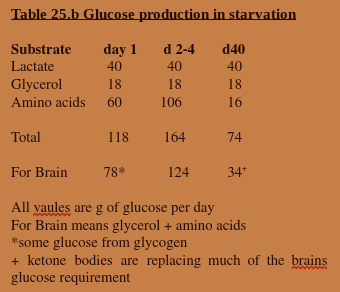 "However, as ketones continue to rise (up to >5 mM), brain can use them in place of much of its glucose utilization. Brain ketone use is driven by substrate supply, but there is evidence that the ketone body transporters in brain increase during starvation. The brain still requires some glucose but it appears to restrict metabolism of most the glucose it uses via glycolysis to lactate, with very little undergoing complete oxidation to CO2 (we're really trying to "spare glucose"). Of course the glycolytic tissues continue to recycle glucose. The lactate goes back to liver for gluconeogenesis.

Most other tissues are using fatty acids or ketones except skeletal muscle, which uses predominantly fatty acids but we don’t know why – perhaps it is to spare ketones for the brain (although circulating ketone levels don't further increase).

Plasma glucose use has now decreased to about 1-2 g per hour, half for glycolysis and half for oxidation to CO2, ie, 24 g oxidized per day.

The high levels of ketone bodies can be considered as a water-soluble fuel for the brain to use in place of glucose. However, they come with a price, they are strong acids and produce a metabolic "starvation acidosis." They are also freely filtered in the kidney; this means that as ketones, rise they will be lost in the urine (a loss of energy in starvation = no bueno) and this must be buffered. Remember we excrete such strong acids as ammonium salts and the ammonia comes from glutamine metabolism in the kidney. Glutamine arises from the extensive proteolysis in muscle and is utilized by the kidney to produce ammonia, bicarbonate, and glucose. Thus renal gluconeogeneis increases in long term starvation and is directly related to the control of acidosis. It is often stated that in prolonged starvation, kidney gluconeogenesis is more important than that in liver; however, by this time the rate of gluconeogenesis in liver has decreased considerably. In keeping with this switch in gluconeogenesis tissue there is a change in nitrogen excretion. Initially during starvation urea excretion increases (reflecting the increased protein breakdown to provide gluconeogenic substrate) but then urea decreases and ammonia excretion increases as ketoacidosis develops. In long-term starvation urea only accounts for about 1 g of nitrogen excreted per day while ammonia accounts for >3 g (compared to 15 g and 1 g respectively at day one of starvation)." 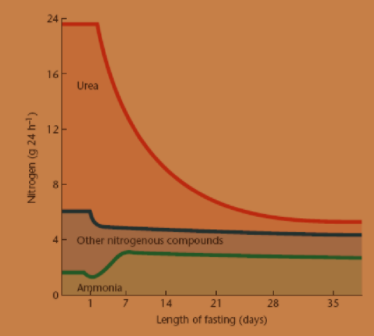 Affiliate links: still looking for a pair of hot blue blockers? Carbonshade and TrueDark are offering 15% off with the coupon codeLAGAKOS and Spectra479 is offering 15% off HERE.
If you have no idea what I’m talking about, read this then this.

If you want the benefits of ‘shrooms but don’t like eating them, Real Mushrooms makes great extracts. 10% off with coupon code LAGAKOS. I recommend Lion’s Mane for the brain and Reishi for everything else.