"Much of the current science on, and mathematical modeling of, dynamic changes in human performance within and between days is dominated by the two-process model of sleep-wake regulation, which posits a neurobiological drive for sleep that varies homeostatically (increasing as a saturating exponential during wakefulness and decreasing in a like manner during sleep), and a circadian process that neurobiologically modulates both the homeostatic drive for sleep and waking alertness and performance (Goel et al., 2013)."

Acute and chronic sleep restriction degrade neurobehavioral functions, attention, cognitive speed, and memory. Strictly according to the studies (not your n=1), < 5.5 hours is bad, < 7 hours is suboptimal, and ~ 9.5 hours may be optimal. Seems like a lot; who has time to sleep 9.5 hours?! 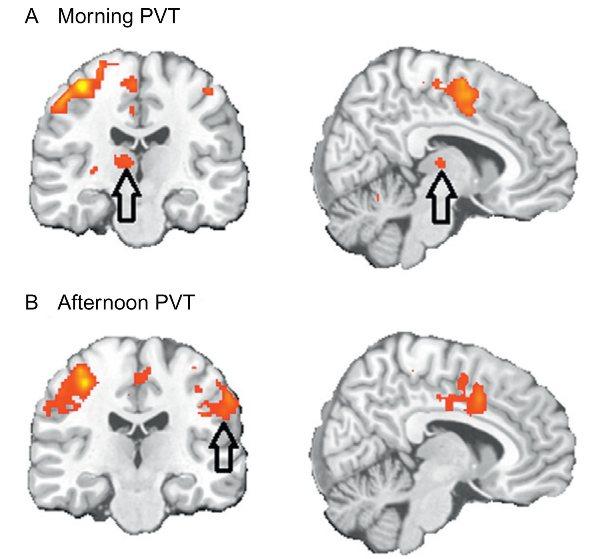 Above image shows cerebral blood flow (orange) in the same person's brain during a Psychomotor Vigilance Test performed in the morning and afternoon. Interestingly, most participants perform better in the afternoon and this is associated with more blood going to a different part of the brain.

"Sleep is a ubiquitous biological imperative that appears to be evolutionarily conserved across species." Mandatory for optimal attention and cognitive performance.

Less than 7 hours a night: deficits in behavioral alertness and vigilant attention.

Chronic partial sleep loss and/or circadian desynchrony is often paired with chronic stimulant use. How do we know no one is hitting that optimal sleep duration of 9.5 hours? EVERYONE DRINKS COFFEE EVERY DAY. Many people even say they need it. I'd say they need to sleep. It STARTS with Sleep.

Humans frequently alter the timing and duration of sleep in exchange for other activities. Social jet lag. DON'T DO THIS.

My advice: go to bed a little bit earlier tonight. Get sunlight and breakfast in the morning. You don't need to go from habitually sleeping 6 hours to 9.5 at once. Work up to it. If you start waking up earlier and earlier, either try to get more physical activity during the day or maybe you've just hit a good sleep duration for you. You shouldn't need coffee.

Affiliate links: still looking for a pair of hot blue blockers? Carbonshade and TrueDark are offering 15% off with the coupon code LAGAKOS and Spectra479 is offering 15% off HERE.
If you have no idea what I’m talking about, read this then this.

If you want the benefits of ‘shrooms but don’t like eating them, Real Mushrooms makes great extracts. 10% off with coupon code LAGAKOS. I recommend Lion’s Mane for the brain and Reishi for everything else.