Relevant study design details: 18 young, healthy, moderately-trained males. First, this was a study on exercise performance. Had it been on glucose management in patients with type 2 diabetes or obesity, this is not the population they would have selected. Second, they needed at least a moderately-trained population otherwise both groups would've made big n00b gainz which may have out-weighed any differences incurred by ketoadaptation in 4 weeks.

Third, 4 weeks is a good duration for this kind of study because maximal ketoadaptation occurs in about 3 weeks and doesn't get stronger thereafter (gains seen beyond 3 weeks are more associated with training effects).

I could tell you carbs were very low in the keto group (<50 g/d) or I could just tell you beta-hydroxybutyrate levels reached 0.7 mM. The difference in carb calories were partially compensated with protein and fat, which is recommended in athletic populations, although as not uncommon in this ad lib #context, the calories weren't fully compensated and the keto group lost some fat mass. I suspect muscle was retained because they were exercising and jacked up protein intake. 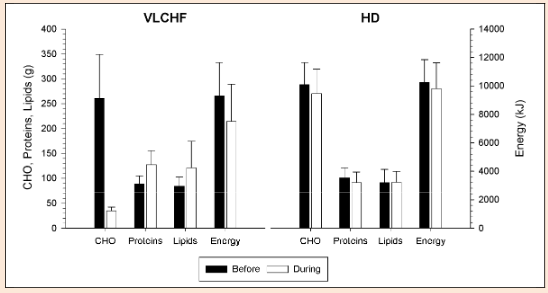 Results: Tl;dr: no big difference on graded exercise tests or high intensity performance (including rate of perceived exertion!). The one major difference was, as we've seen before, drastically higher max fat oxidation rates in the keto group. They didn't reach the elusive 1.5 g/min levels seen in FASTER & Phinney's study, but 1.1 vs. 0.8 ain't bad.

This study tested 12 weeks of 6% carbs and slightly higher protein vs. a more habitual carb-based diet. This study was based on self-selection which isn't true randomization. I'm OK with it in this context because it makes up for in adherence what it lacks in rigor. In this #context.

Results, Tl;dr: performance was relatively similar in both groups on an overall level, but when expressed as per kg body weight keto appeared to improve performance. Not on an absolute level, but since they lost fat mass but preserved muscle (likely via exercise and increased protein), performance didn't suffer.

Final thoughts: note to those who say performance declines on keto if intensity gets high enough because of reduced glycogen -- this isn't always the case. Glycogen levels were lower in Phinny's cyclists but not FASTER's runners. Maybe it's sport-specific -- cycling may selectively deplete the glycogen in the muscle groups that are frequently biopsied in these studies -- or maybe it's something else. Idk.

Check out my Patreon campaign!

Affiliate links: join Binance and get some cryptoassets or download Honeyminer and get some Bitcoins for free! And now you can mine Bitcoin from your Chromebook!