Skip navigation
We use cookies to improve your experience using this site. More information
Become a patron
Nov 15, 2018 at 7:23 PM
The carb/insulin model of obesity was tested again, and it fared better this time.

This is another NuSi study designed to evaluate certain aspects of the carb/insulin model of obesity. Understanding the design of this study is critical to being able to properly evaluate the results. 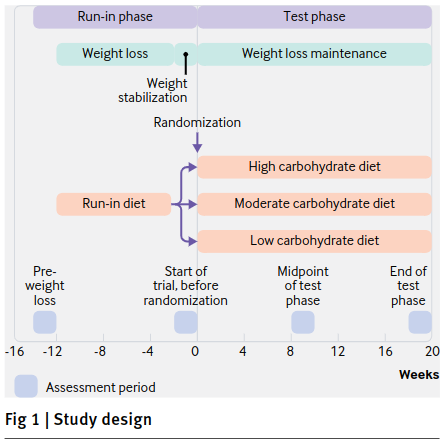 1. All food was provided, all the diets were healthy, and most people complied.

2. This was a very expensive study. They used great methods.

In the end, we had 38 people in the entering into the high carb arm of the weight maintenance phase and 43 on low carb.

Remember, they all lost weight on the same diet. Now they're being fed enough to maintain body weight (low carb, moderate carb, or high carb) and we're measuring stuff.

Weight maintenance diets (not to be redundant, but again, this is after they all lost weight on the same diet and calories were dynamically adjusted so they could stay at their new lower body weight): 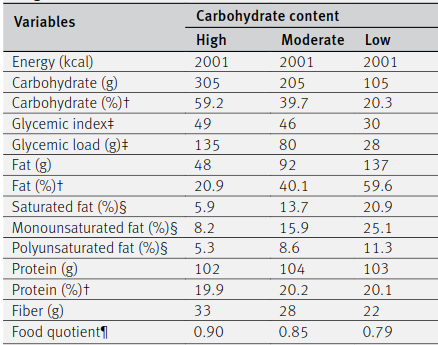 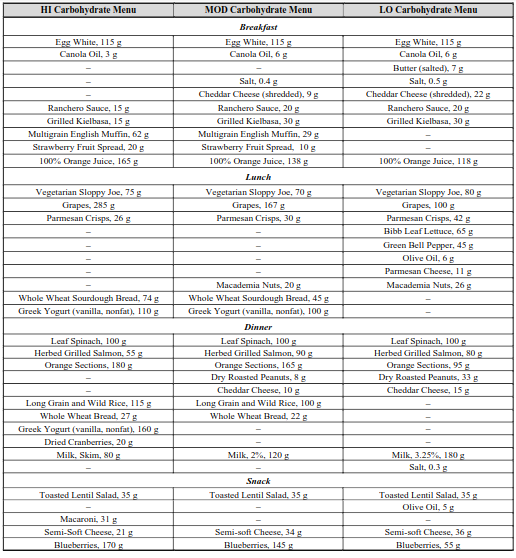 Main outcome measure: total energy expenditure. This is basically how much more you can eat or how much less exercise you need to maintain the weight loss. And this is where the magic happened. 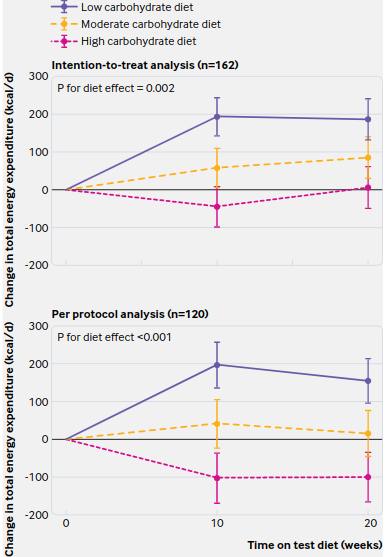 In the figure above, you can see there was little if any recovery of total energy expenditure in the low fat group.

Leptin was higher and ghrelin was lower in the low carb group suggesting that in an ad libitum context, this may have led to greater weight loss.

Now onto that other theory, the IR/IS-LC/LF theory, total energy expenditure in the most insulin resistant people barely recovered and actually slightly declined in the high carb group whereas there was a much greater improvement in the low carb group. What's giving this theory more traction from this study is the magnitude of the effect. The difference between low carb and high carb was 478 kcal/d. Almost twice that observed when people weren't subgrouped by insulin sensitivity! This didn't matter very much in the participants who were the most insulin sensitive.

and viewed in another #context: 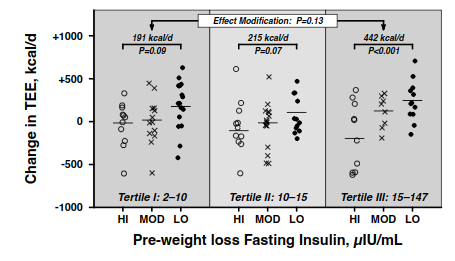 If you’re interested in setting up consultations with me, reach out: [email protected].

Check out my Patreon campaign! Five bucks a month for full access and there are many other options.