Matt Ware of @First commented recently about Voice Insider: “Voice Insider gives me the ability to stay on top of current Voice trends without having to trawl every blog and Tweet looking for the latest news.” Yep. We do that. ;^)

Think Tank - Are Duopolies the Natural Order of Voice?

We saw new data from Canalys last week showing two companies dominating smart speaker sales in China. Alibaba and Xiaomi command over 70% of all devices sales in Q3. Outside of China, there are two other smart speaker makers that reign supreme. Amazon and Google collectively represent 62% of global smart speaker sales and 78% of device sales outside of China. When you consider installed base as opposed to quarterly sales, the dominance of the two smart speaker duopolies in China and the rest of the world (RoW) command even higher market share. The data certainly can lead you to the duopoly conclusion.

Competitors on the Rise?

In China, something else is happening. Although Alibaba and Xiaomi commanded 71% market share in Q3 2018, that is down from 94% in Q1 2018. The reason? Baidu. Its introduction of a low cost competitive product in Q3 has stolen over twenty percentage points of market share from Alibaba in quarterly sales. RoW has more stable dynamics. Apple entered the smart speaker market in Q1 2018 and has only captured about 4.5% of the installed base and not more than double that figure in quarterly sales.

Baidu and Apple appear to be best positioned to break up the dual duopolies in the near-term. China is a much younger market so it is easier to make big gains in any given quarter. But, Apple appears unlikely to put a dent in Amazon and Google’s stranglehold in Q4. In fact, it will probably lose market share as there are no new HomePods for the holiday season. In addition, the U.S. is really a 95% market share status quo for Amazon and Google since nearly all third party smart speakers are simply vessels for Alexa and Google Assistant.

The Real Voice Dynamism will Take Place Outside of Smart Speakers

The recent rise in voice assistants was driven by smart speakers, but the battleground is expanding quickly. For RoW, don’t expect too much change in smart speaker market share. It will fluctuate as we saw in the early days of smartphones, but eventually would naturally settle into a duopoly. Except…..voice is different from smartphones. Voice assistants exist across multiple surfaces whereas smartphones represented a single surface. Dominance in one surface certainly helps on other surfaces because of the value of continuity, but it doesn’t assure success. This is where Apple’s strategy is strongest. Its strength in smartphones and personal devices such as Watch and AirPods will keep Siri relevant even if the capabilities are lacking. That will have a spillover effect in smart speakers and other surfaces. Siri will be supported.

Google Assistant’s cross-surface strengths (and access) are a big issue for Amazon for this very reason. Over time, if a voice assistant comes to dominate a surface, it is likely to make market share inroads into other surfaces. This is where Apple or Bixby could have an opening. The logical goal should be to dominate a surface at all costs and then use that as leverage in other surfaces. Google and Samsung are the best positioned today to dominate across surfaces in RoW given their reach. Xiaomi and Baidu are likely best positioned for these strategies in China. Xiaomi is a device powerhouse and Baidu says its DuerOS assistant is already available in over 100 million devices.

So, when you think about voice and duopolies consider whether you are speaking about voice assistants in general or on a particular surface. The cross-surface nature of voice assistants suggest the market ultimately will be more fragmented than what we have seen in smartphones, computer operating systems and social networks. However, on some surfaces you are still likely to see either two players sharing 85% market share or a single dominant player while others may be fragmented with many players capturing double digit market share. That still may mean the average person uses 5-7 voice assistants per week just like they do with mobile apps today.

Google Home Hub is the only smart display that doesn’t have a camera. That seems like a disadvantage when a key use case for the devices is video chat. However, that limitation may also be a strength in certain use cases.

For consumers that have thought about replacing their bedside clock with an Amazon Echo Spot, the presence of a camera in the bedroom may be the deciding factor against purchase. It’s hard to imagine many consumers putting a Facebook Portal with a camera that follows you around the room into their bedrooms. More-privacy sensitive consumers now can choose a smart speaker with a display and no camera for the bedroom.

Another example is on display at Sephora where Google Home Hub is being used in a makeup station demonstration. You could envision some consumers intrigued by the option of having a small video device in their bedroom or bathroom to run through tutorials when applying makeup. There is at least one smart mirror company that has contemplated this use case. The absence of a camera may make Google Home Hub more attractive than the alternatives because of what it lacks more than what it has. When you look at a device, keep in mind that the absence of a feature may be what opens up use cases aligned with consumer preferences.

Upcoming Events and Other Notes

Wow. There are a lot of people working on Alexa and the hiring rate is actually increasing. 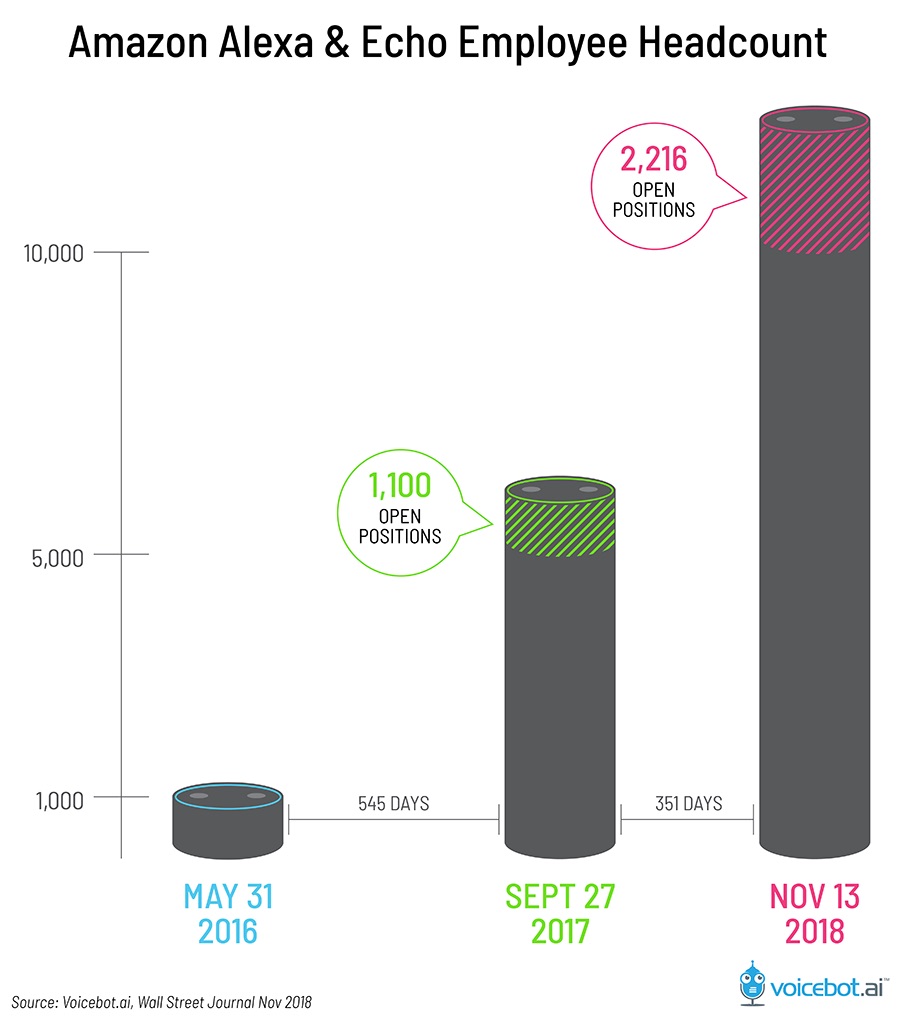