Skip navigation
We use cookies to improve your experience using this site. More information
Become a patron
Jan 18, 2019 at 9:03 PM
Voice Insider #22 - The Duopolies Won’t Last, Why PullString is a Good Acquisition for Apple, and Alexa Conference Recap

Henceforth, Voicebot and its various outlets such as Voice Insider will be known as the “Award-winning Voicebot.” Just kidding, but we did win the Alexa Conference Commentator of the Year award for the voice industry. Thank you all for giving us some much news to comment about...even the fake stuff.

Think Tank - Just When People are Getting Comfortable with the Duopolies, They Look Vulnerable

Voice Insider #13 was the Duopoly Issue. We discussed the seemingly parallel development of duopolies in the U.S. and China around smart speakers and warned that beyond those devices voice assistant market share looked far more fragmented. Interestingly, device makers at CES 2018 were lamenting the pending need to support both Alexa and Google Assistant, but by CES 2019 seemed comfortable supporting the duopoly. Even Samsung decided to support Alexa and Google Assistant in its device ecosystem. However, few device makers thought there might be something more they needed to address. Apple AirPlay for Audio and Video didn’t raise concern about supporting another voice assistant. That seems misplaced.

The smart speaker duopoly of Alexa and Google Assistant in the U.S. and Europe remains strong. However, when you get to smartphones it’s another duopoly for Siri and Google Assistant. Appliances and wearables are likely to get pressure to support all three voice assistants. Then, there is Bixby in appliances and Nuance and SoundHound in the car. We are on the cusp of more fragmentation and consolidation.

China is Following a Similar Path

We see a nearly identical situation in China. Alibaba and Xiaomi established an early duopoly in smart speakers capturing over 90% of device sales. Then Baidu’s DuerOS shifted the smart speaker strategy to shore up about 20% quarterly sales share in Q3 2018 and arrive on 150 million devices in total. Today, Apple HomePod will start selling in China and will essentially have the high end of the market almost entirely to itself. And, we heard last week that Tencent is developing a voice assistant for WeChat. The duopoly will be undone quickly and might re-emerge with different players, but that will take some time.

The takeaway here is that duopoly is an observable phenomena today, but it is limited and soon will change. Get ready for more complexity before we find more simplicity.

So, there are a few rumors floating around about PullString. Some of their customers are suddenly shopping for new tools for their Alexa skills. The company paid for an Alexa Conference sponsorship, but didn’t show up. Oh, and a big part of their sales and marketing team that was on staff in December, now have new jobs, while most of the engineers are still on board. One former employee may have even indicated in a public forum what happened before editing out the details. I have a pretty good idea what happened, but no official confirmation as yet. Suffice to say the transaction has happened. The details will filter out over time. But for now, let’s go hypothetical.

Why might Apple want to buy PullString? It’s all about the iOS developer community and enabling it to move quickly. Let’s say Apple is planning a big update to Siri that includes broader domain support and even decouples voice features from iOS apps. This may be planned for announcement at WWDC with a fall release date. Apple wants to make sure adoption is fast. Maybe offering enterprise tooling to streamline voice app development is a way to enable your 15 million iOS developer community to ramp up quickly. Solid strategy for a fast follower. You may recall Google did something similar when it purchased API.ai (now Dialogflow) before launching Google Assistant. The tools are different, but the intent is similar.

Pitchbook shows that PullString raised $13.6 million in April 2016 brining total capital funding to $44 million and a post-valuation of about $164 million. A typical fundraising cycle of landing new investment after 18 months would have placed a new funding round last fall or sometime around now. Oftentimes, periods where fundraising is planned are also when companies consider acquisition offers. If you have any additional information on this you’d like to share, hit me up on Telegram…@bretkinsella.

There are more U.S. adults using voice assistants monthly in the car than on smart speakers. Yep, we said that and put out some data to prove it. But, very few people are developing 3P voice apps for in-car use cases. It’s an opportunity. 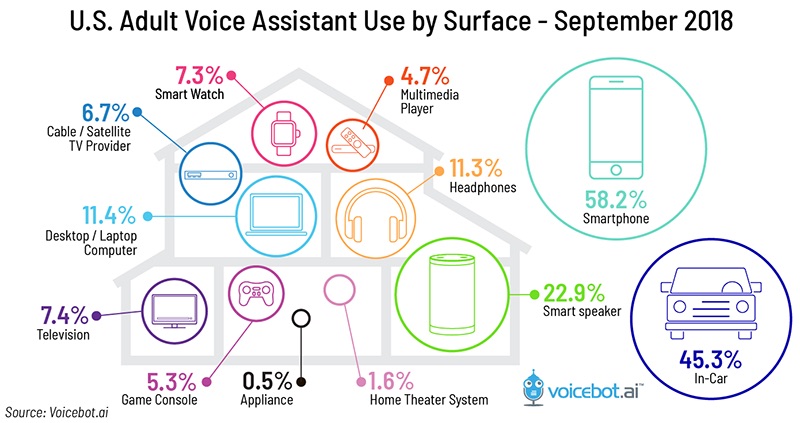 Fun trip to Chattanooga, Tennessee to meet with 500+ attendees of the Alexa Conference this week. Interesting main stage presentations from Brian Roemmele, Nolan Bushnell, Katie McMahon and more. I was recording podcasts and in meetings frequently so missed most of the breakout sessions, but shoutouts to several that I did make including those by Dave Kemp, Dylan Zwick, Paul Cutsinger, Dustin Coates, and Amy Stapleton. Overall, the event had a community feel. Everyone was from out-of-town, so we all hung out together in a charming city with good restaurants. There were a lot of interesting people to meet with, some innovations to discuss, and some people just getting their feet wet.

Brian Roemmele’s presentation was widely discussed and seemed to generate polarized reactions. Some were enamored, some confused, and others skeptical. But, everyone talked about it which is really interesting. It’s not often you go to a conference and everyone wants to talk about a presentation that elicits strong reactions. I caught up with Brian for an onsite podcast where we break down his vision. Look for that next week...especially if you were in Chattanooga. It clears up a few points of uncertainty. Overall, it was pretty much the opposite of CES. Not a lot of news, but a lot of learning and industry relationship building.