Today is my birthday so I want to do an extra post and just give away some Shader Graph conversions for older effects :)

Graph Files are attached to this post~ (They are unlit, but you can make them a PBR master if you want, in that case, add the edge outline to the Emission slot for a nice glowing edge )

First we need a script that sends the Position and Radius of the effect to shaders.

Drop this on the object you want the effect on. The radius is set for all shaders with "_Radius"

Getting the Interactor Position and Radius

Only 2 lines in code, and even in Graph form it's pretty simple:

Use a World Position Node, and a new Vector3 Property with Reference _Position, (same as the c# script), connect both to a Distance Node and we have the first line.

For the second line, divide the result of above with a new Vector1 with Reference _Radius (from the c# script), then run the result through a Saturate, and a One Minus node

Here is the important part that all the following 3 effects all use.

To make the effect look a bit nicer, add some triplanar Noise. 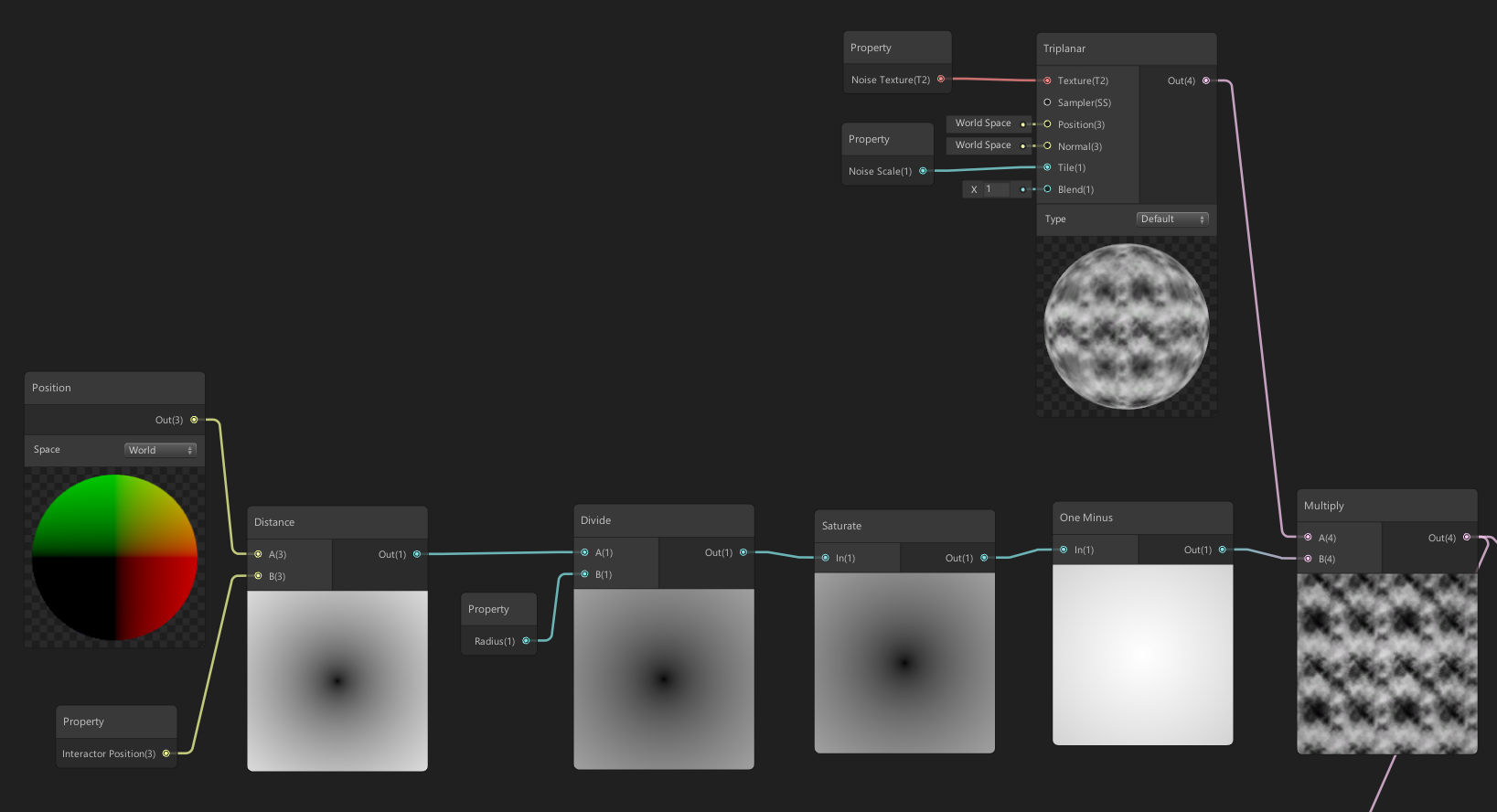 Add a new Texture Property for the noise ,and hook it into the Triplanar node, you can also add a Vector1 Property to control the Noise Scale.

Multiply with the Radius result

To make things appear based on the radius we need use a step node, slot the Noise Radius Result into the IN part of the Edge node, and a new Vector1 Property called Radius Noise Offset into the Edge, this offset vector1 will control the amount of noise visible in the radius.

Hook the result to the Alpha of the master node, then multiply this result with the Main Texture for the Color.

For the Alpha to work you need to add a new Vector1 of 0.5 into the AlphaClipThreshold.

To make the effect look a bit more magical, let's add a coloured edge around the radius. 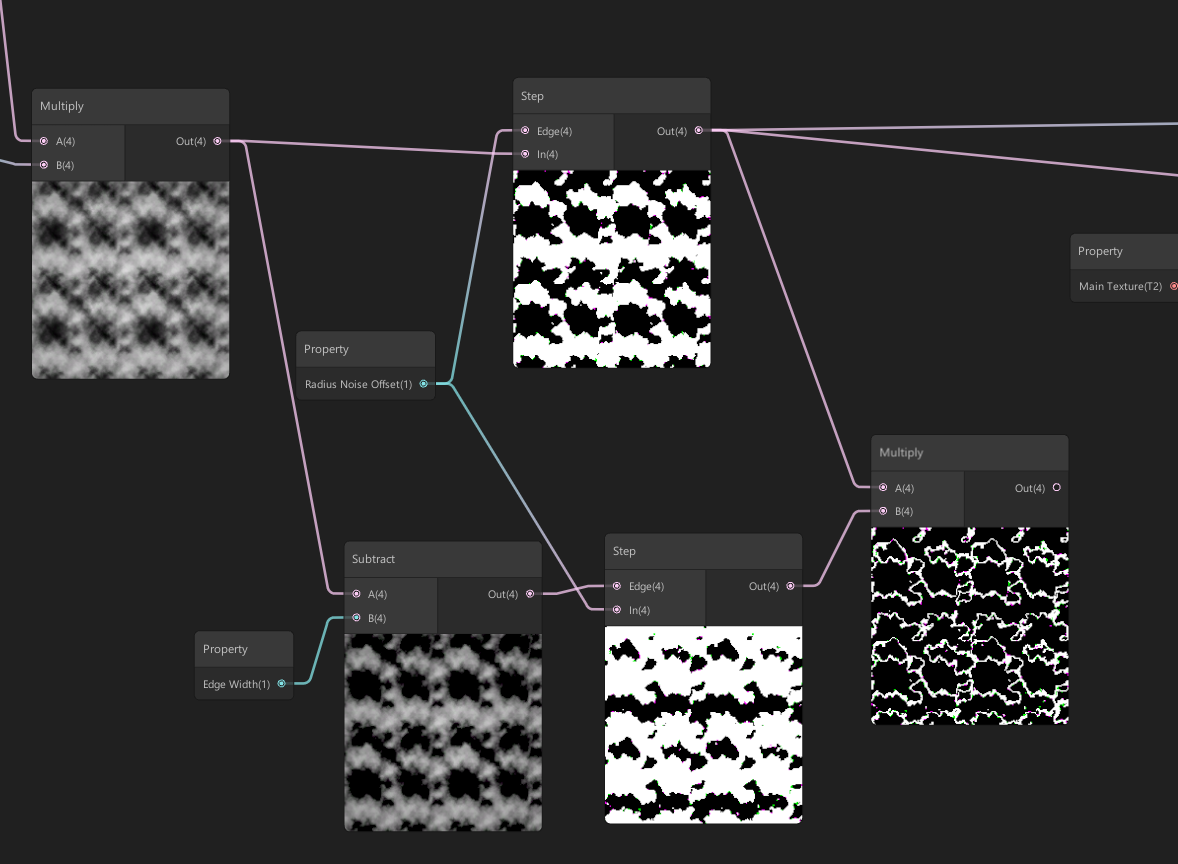 Add a second Step node, only before plugging in the noise radius, Subtract a new Vector1 Property called Edge Width. And this time, the (subtracted) noise result goes in the Edge slot of the Step Node, and the Radius Noise Offset into the In slot, reversing the result of the previous step we made, and with a small extra edge.

If you now multply the two step results together, you get a small white edge. 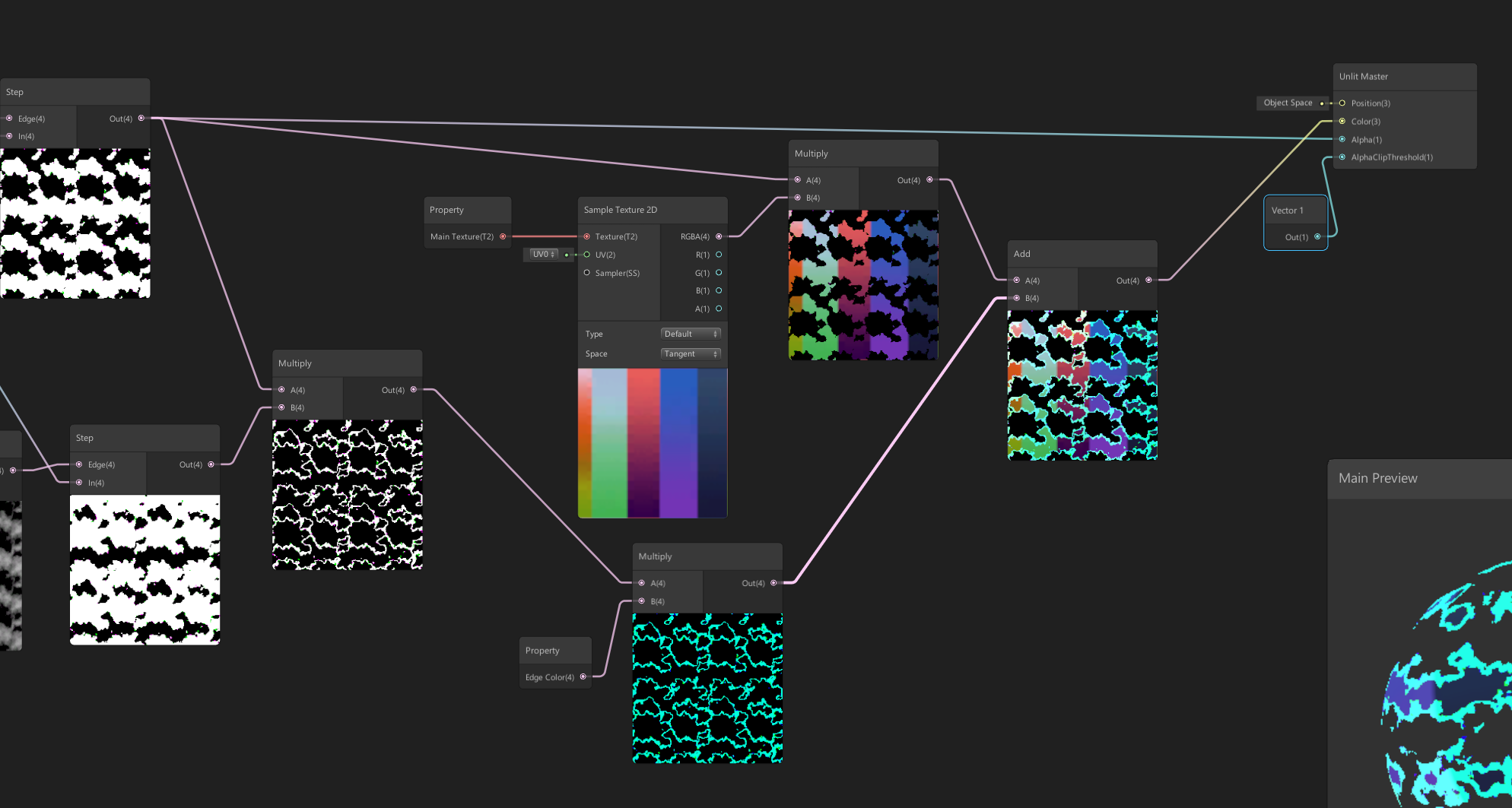 Colourize the edge by Multiplying with a new Color Property, and finally adding it to the textured result

For a disappearing act, simple reverse the logic for textures and the Alpha. 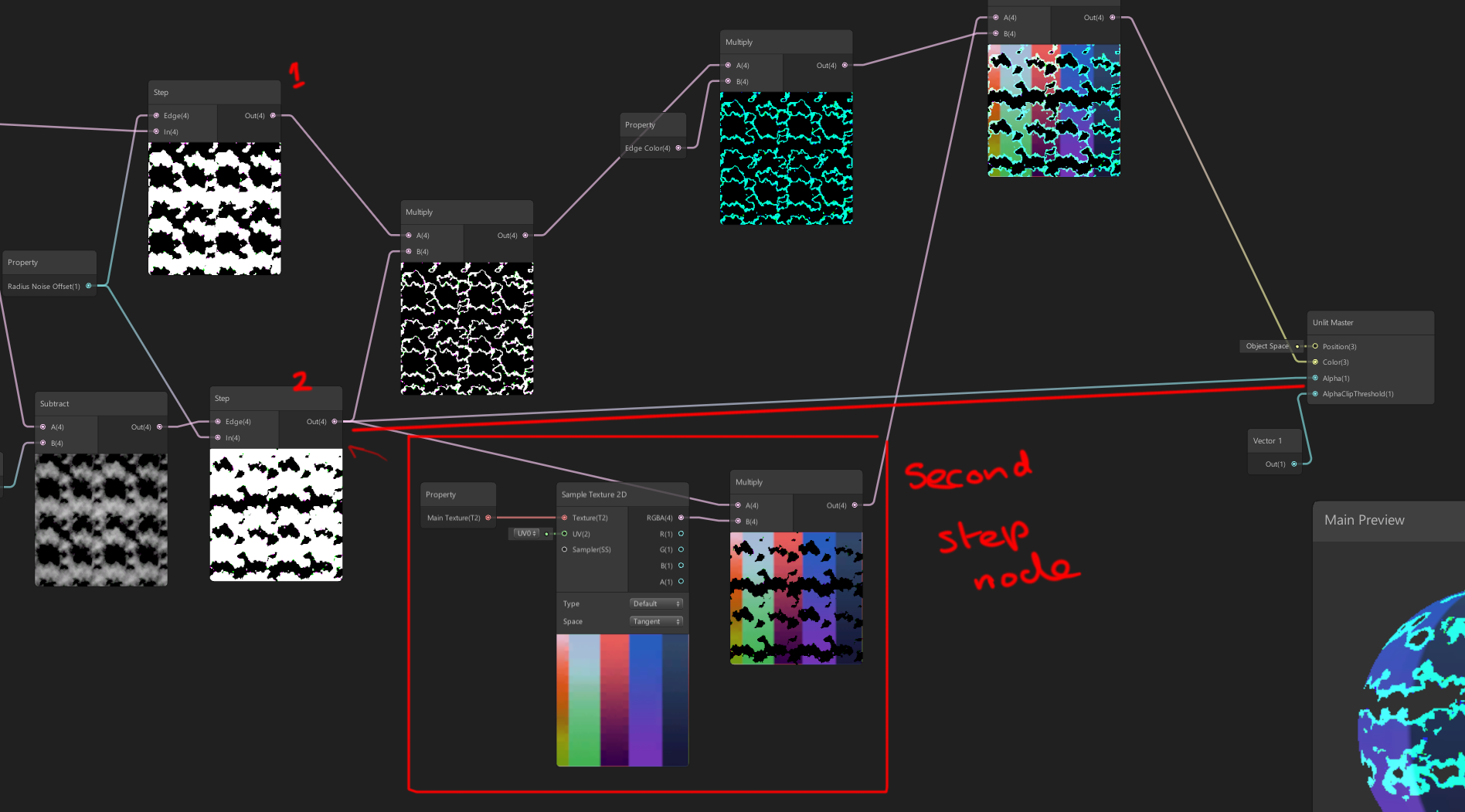 (I duplicated the Appear graph to start this one)

To swap 2 textures, nothing is slotted into the alpha channel, 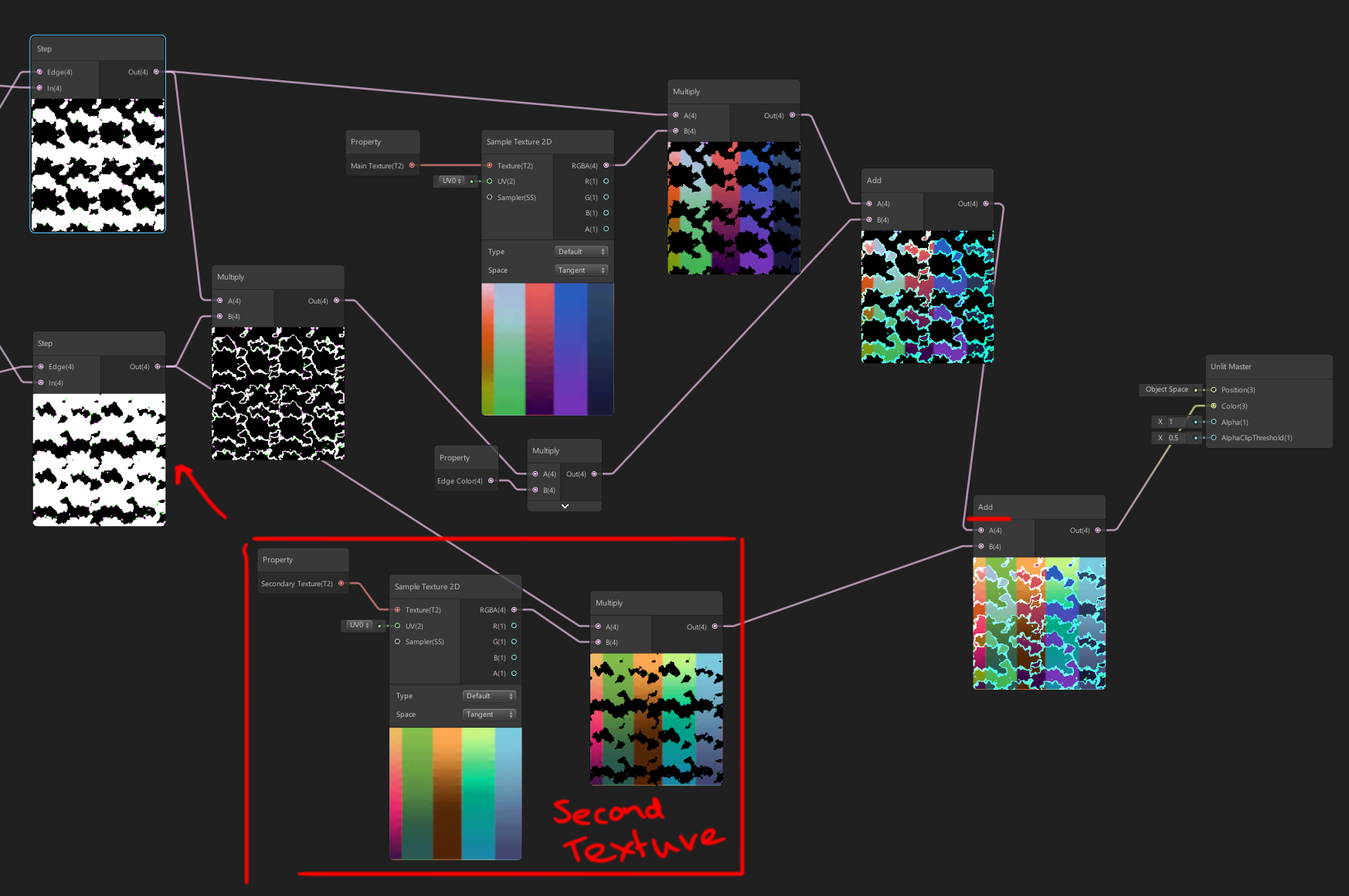 Instead make another Texture 2D Property for your secondary texture, and multiply with the Second Step. Then add it to the Main Texture + Edge result.

Thanks for reading and have fun!