Hey everyone! Brooke here. I’ve been hard at work making much needed terrain updates. The fire biome has been completely redesigned so I wanted to give you all an update on my progress.

As you can see in this map view, the current state of the fire zone is pretty bland. 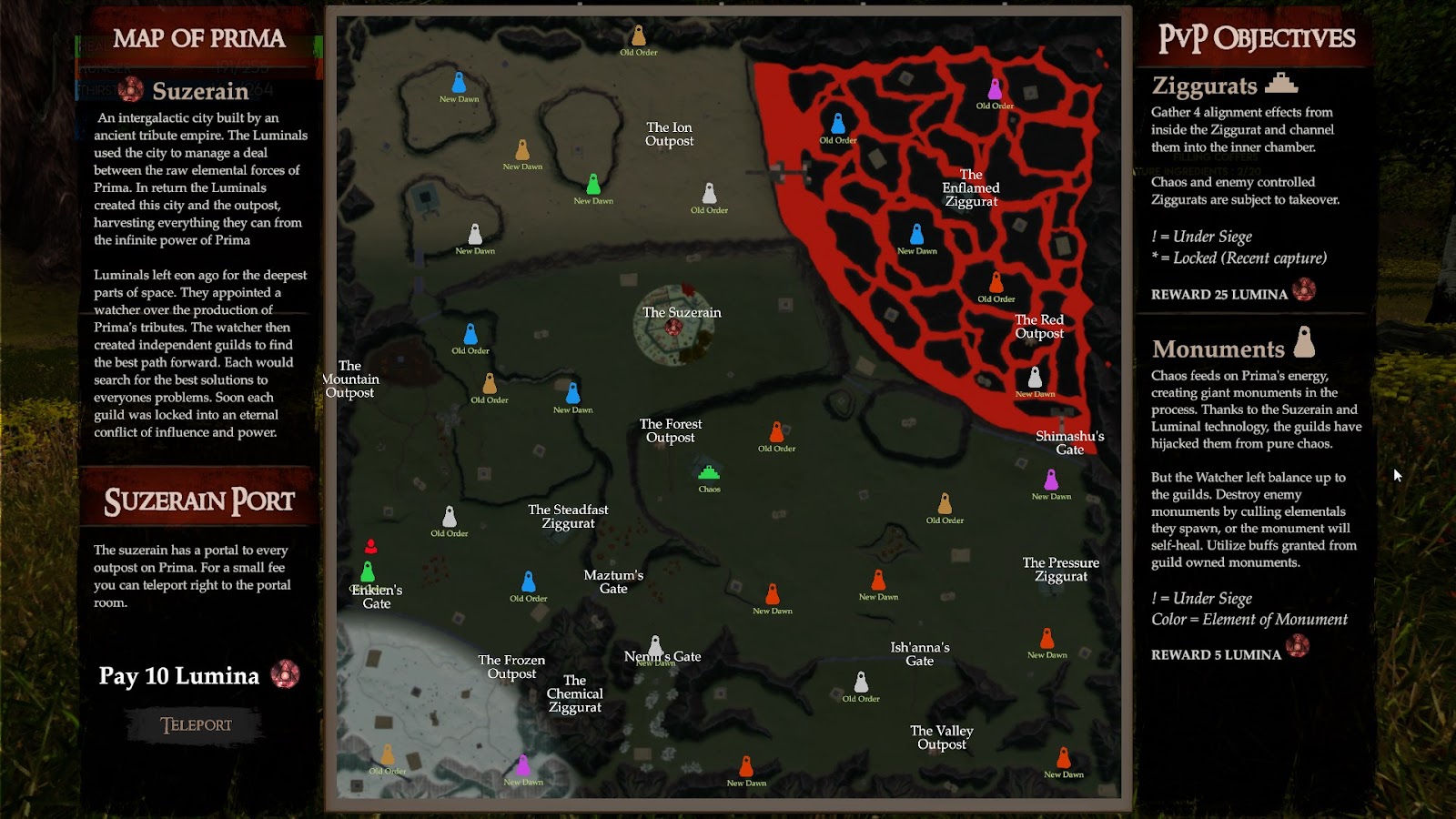 It's basically just a mountain in a corner with a very basic lava field. I did not spend much time at all on this zone when I was drawing the height map, the lava field was essentially placeholder until a later time (now) when I could actually take the time to build it. 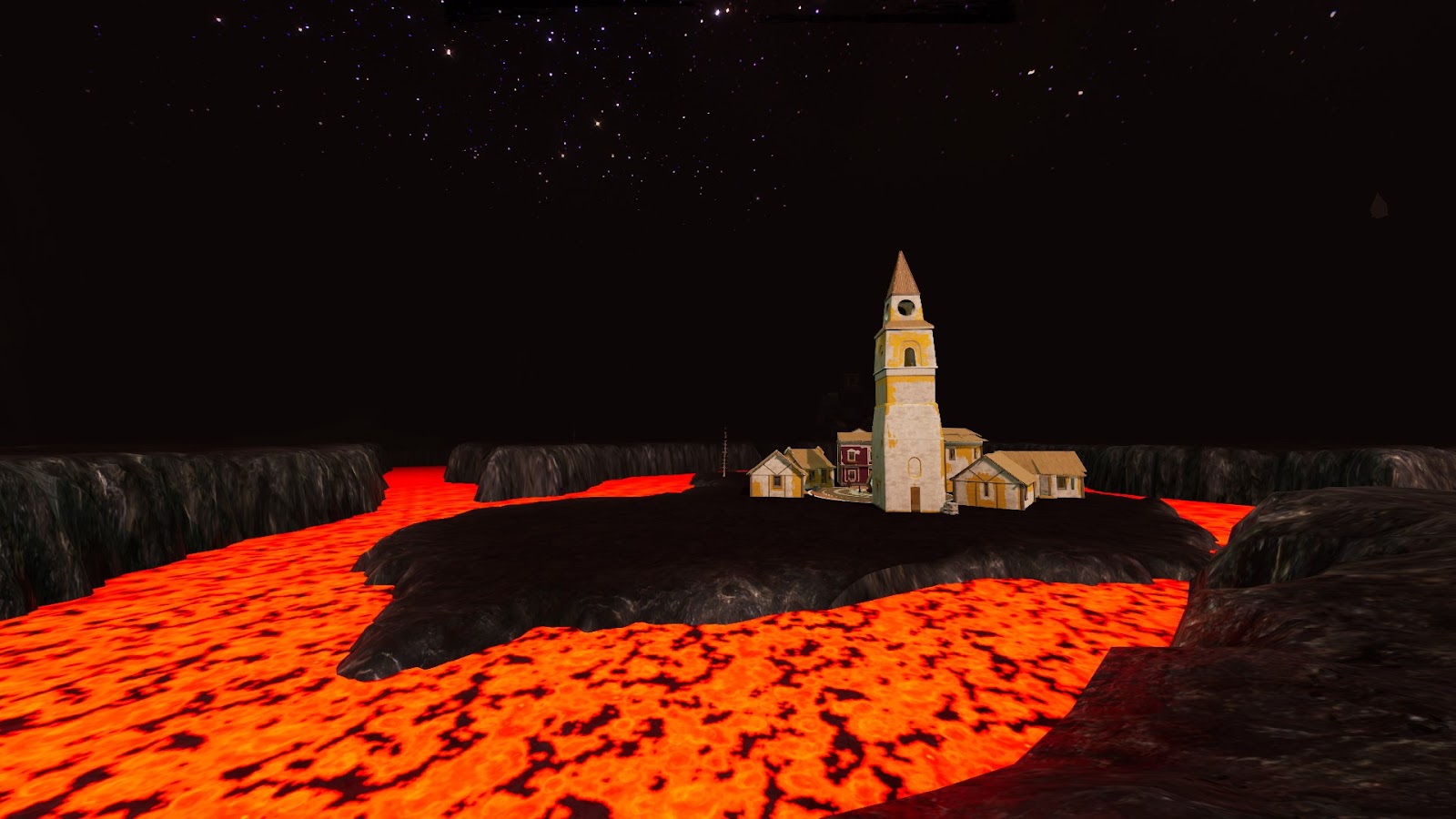 To start, I just flattened the entire biome so I could build up from a consistent point, then sloppily filled in some texture. Keep in mind: All screenshots from this point are directly from the Unity viewport and not in-game with all of the post processing and pretty lighting.

I did a lot of research on volcanoes so I could make something that looks somewhat real, or at least recognizable. I decided to sculpt a tall composite volcano that had a very explosive eruption which totally reshaped the entire biome. The volcano was my focus for several days, as I wanted it to be huge and interesting but also exciting and rewarding to explore. 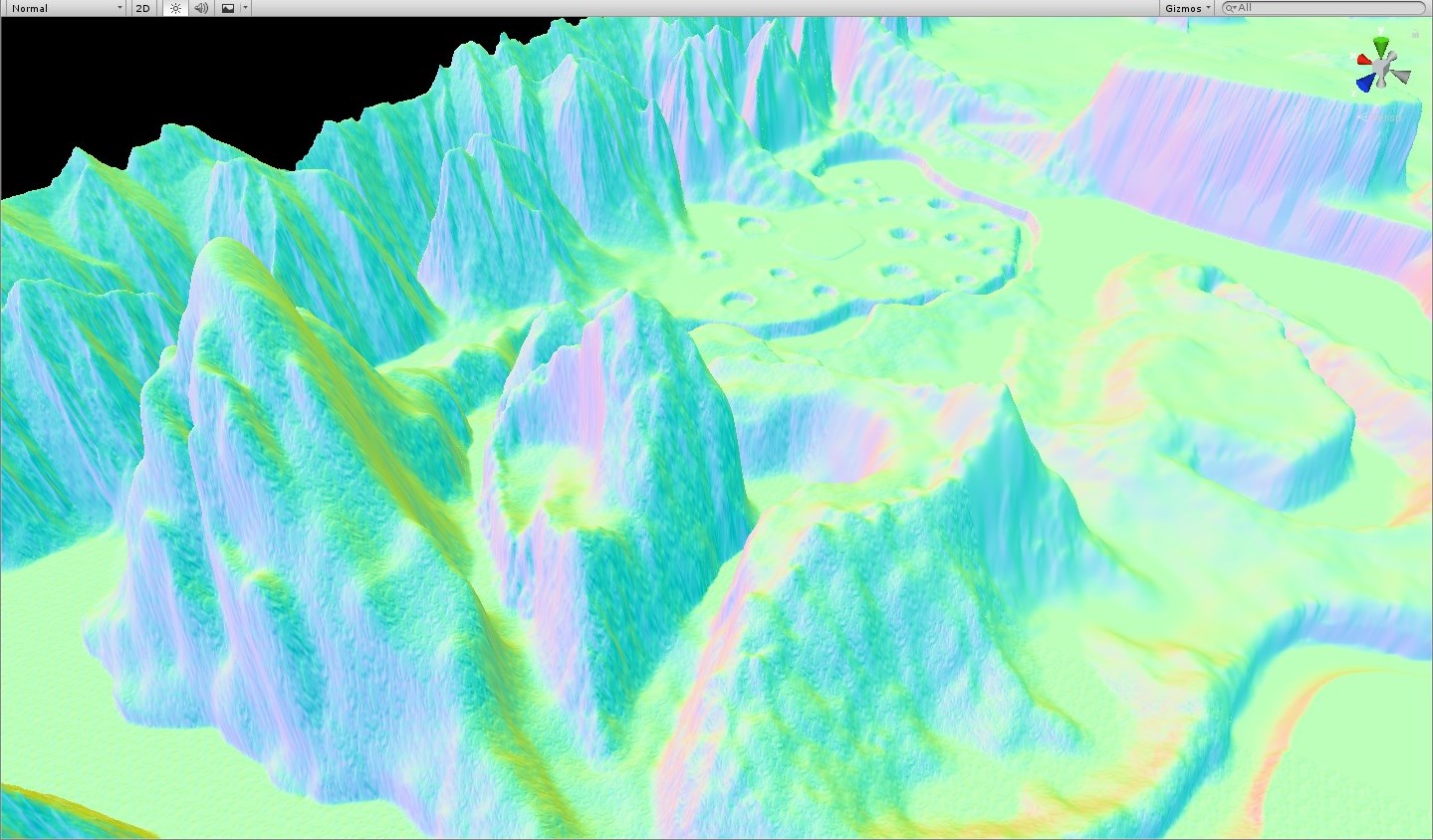 I also wanted to implement several different volcanic land forms to make the zone as memorable and interesting as possible. After finishing the general size and shape of the volcano, I added some lava flow channels, a volcanic rift and a crater field. (I'm showing the Normal view to show depth a bit better than shaded view) 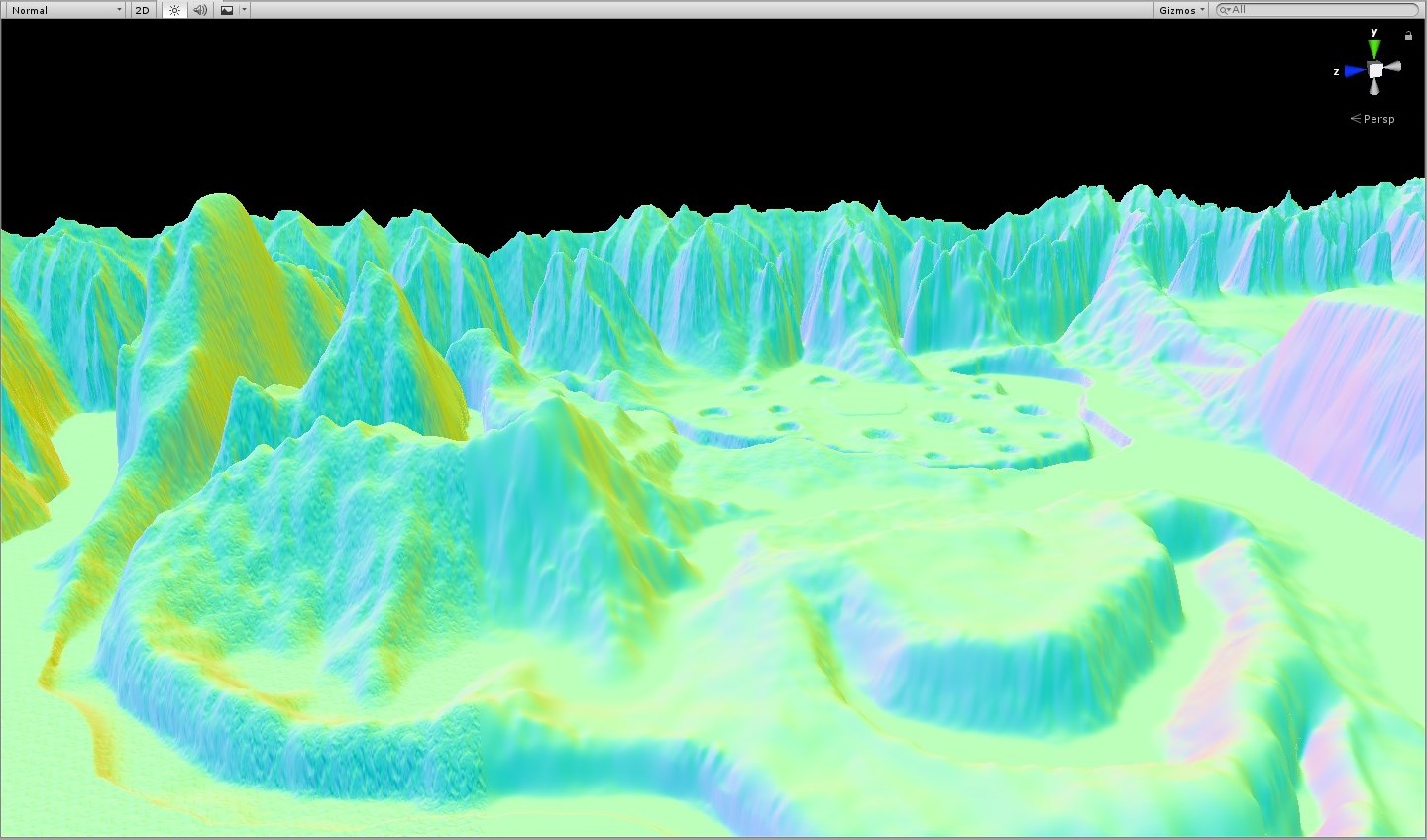 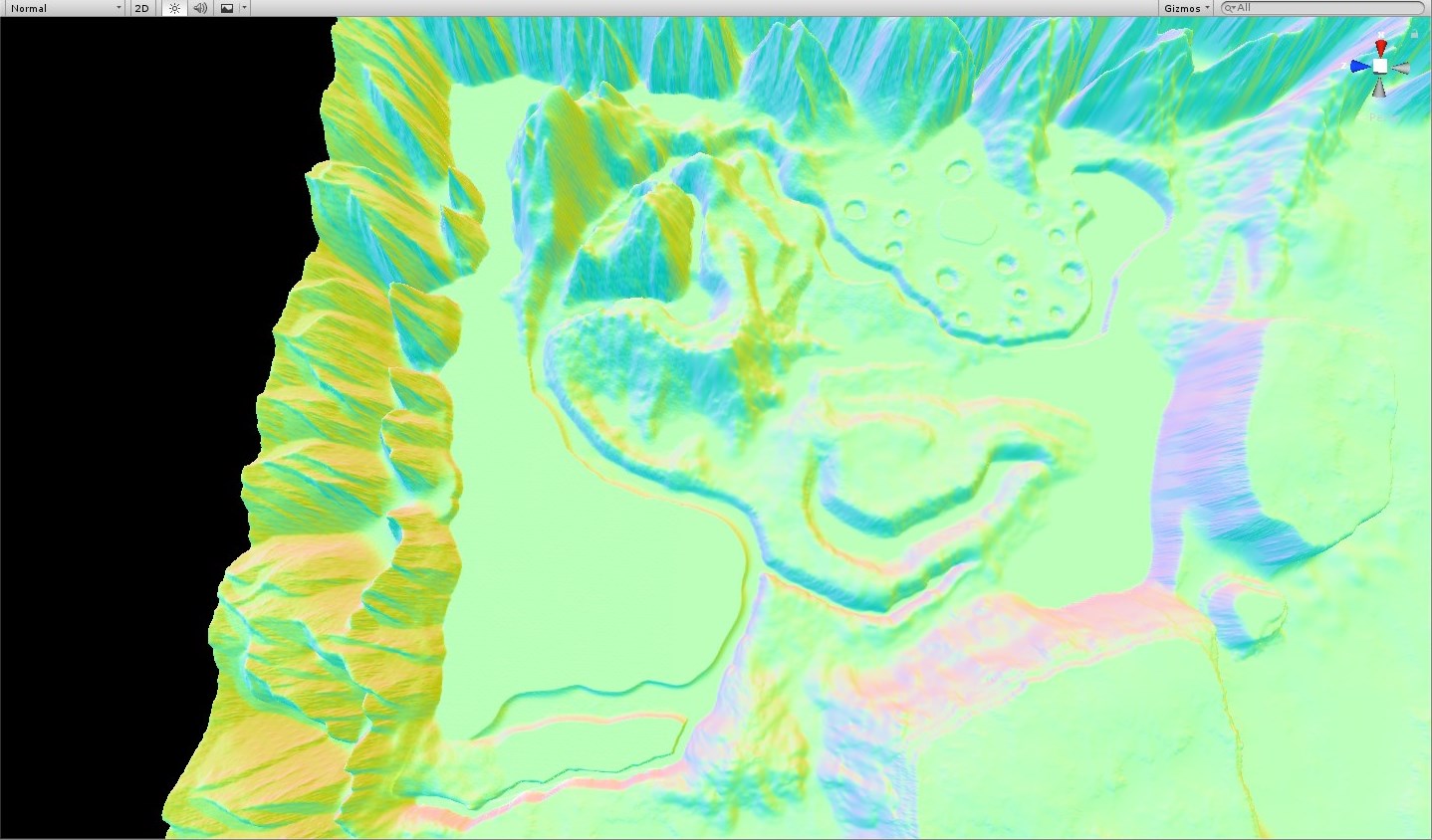 In the last blank area, I wanted to put in a lava field. I really liked the concept of it in the live version of the map, but it was really redundant and boring. Plus the huge amount of lava really reduced the usable terrain area. So, I decided to add in a much smaller lava field instead. 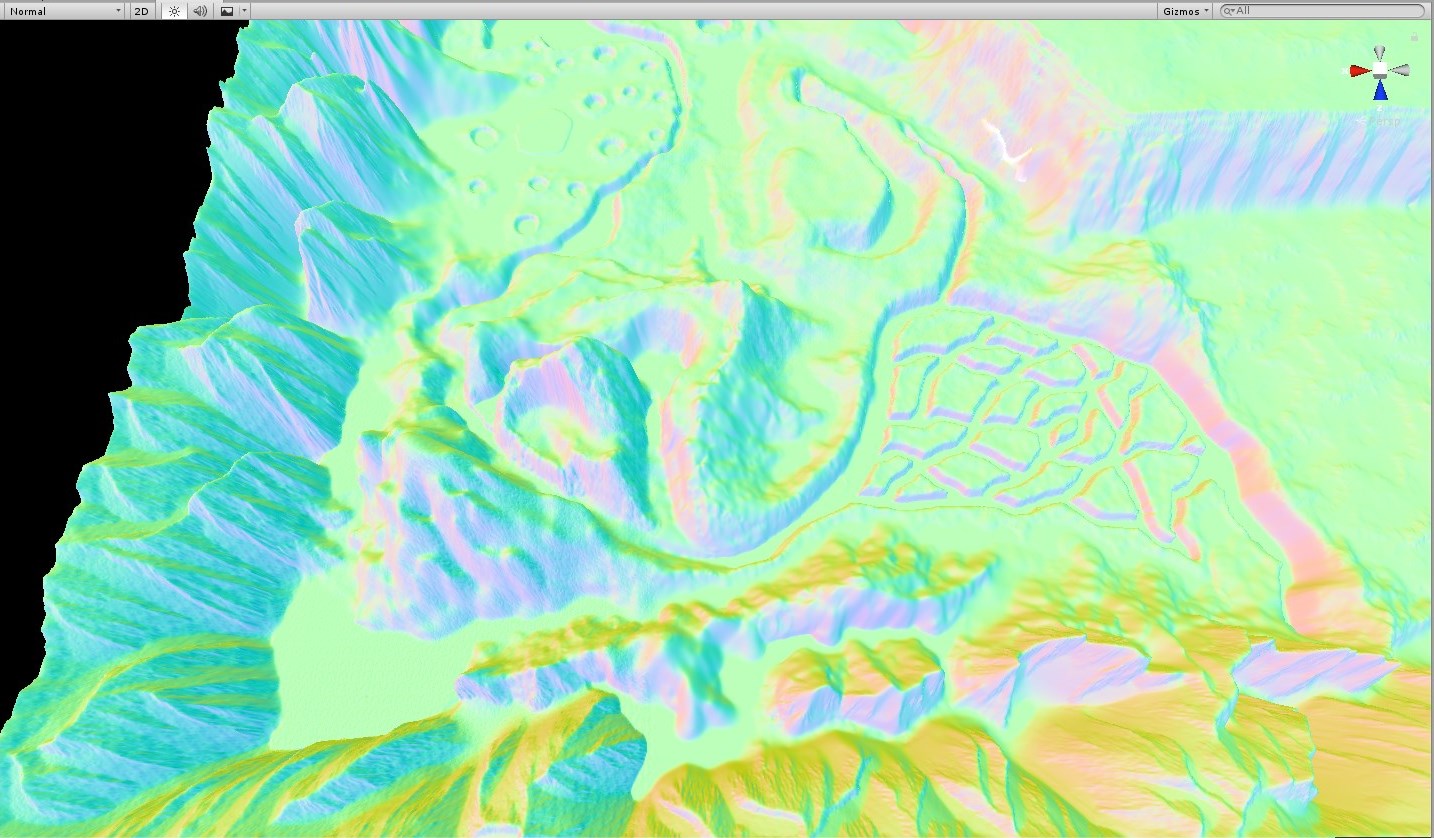 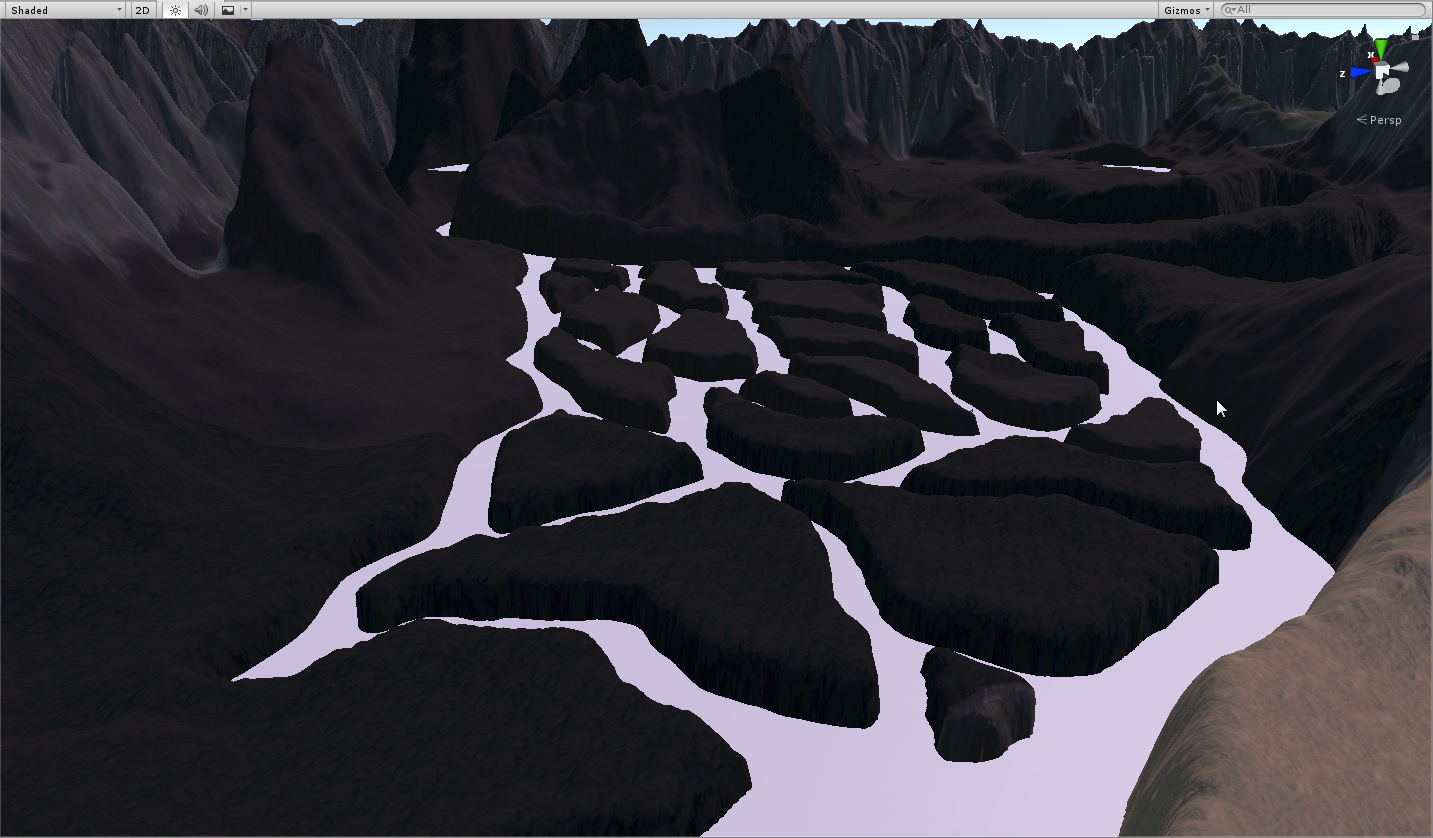 After I finally finished sculpting the terrain, it was time to texture. I replaced the old volcanic ground texture with a new, higher quality texture. The terrain layers were cleaned up and unnecessary textures were removed.

I spent a few days getting the basic texture painting done. There are tons of cliffs, mountains and craters, so it took quite a while just getting them painted. It was worth the time though, because it turned out looking very nice! 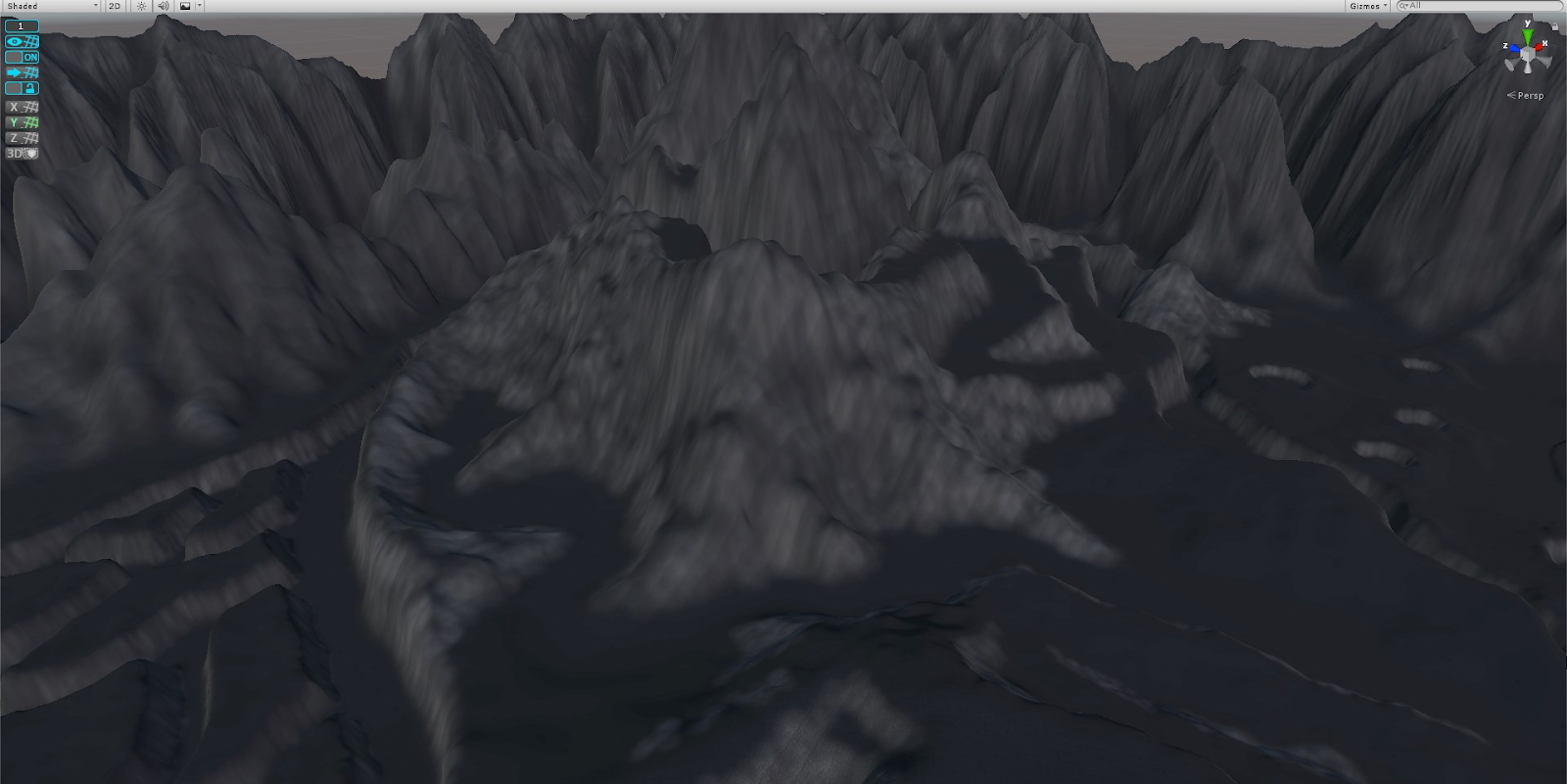 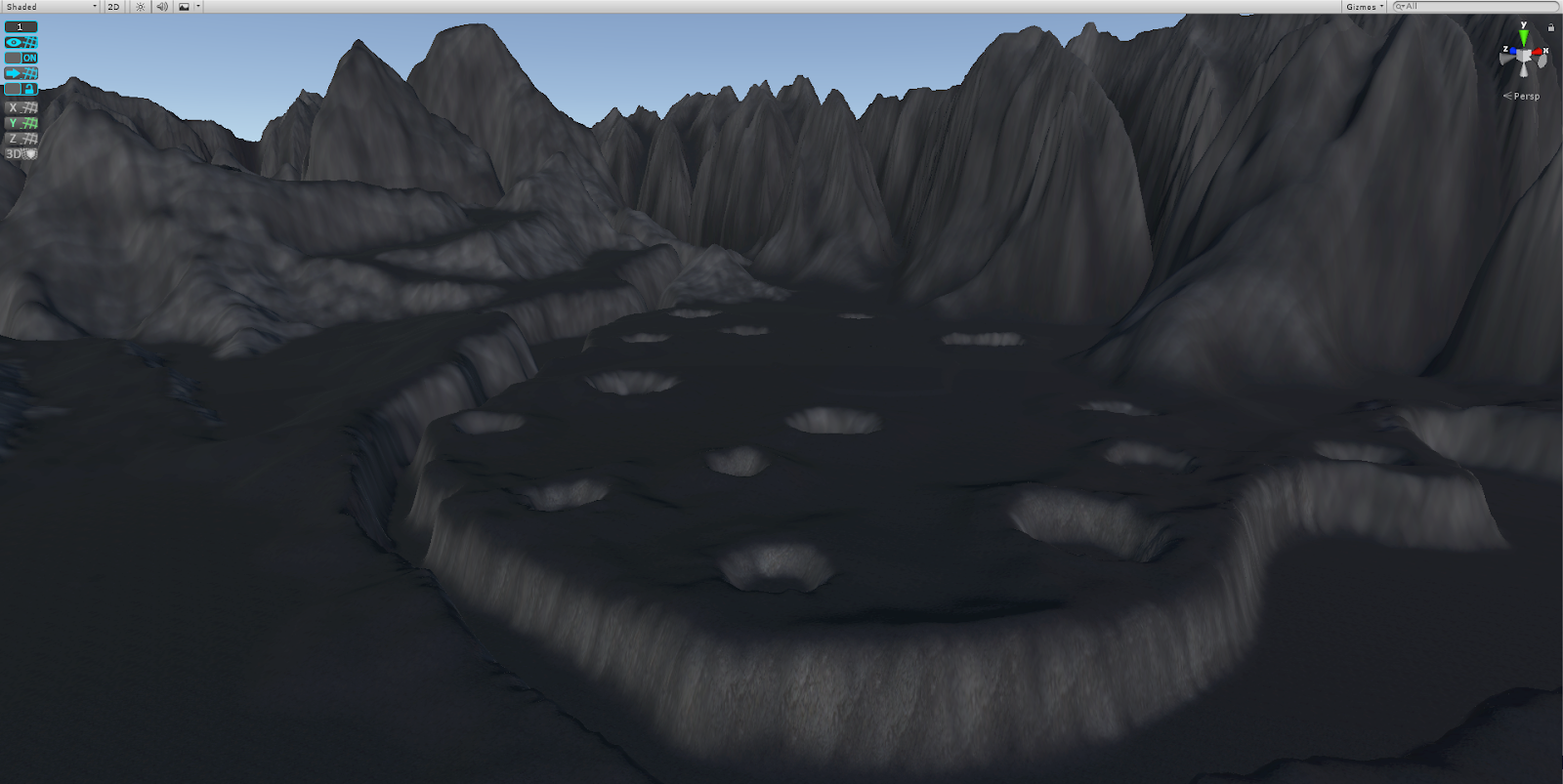 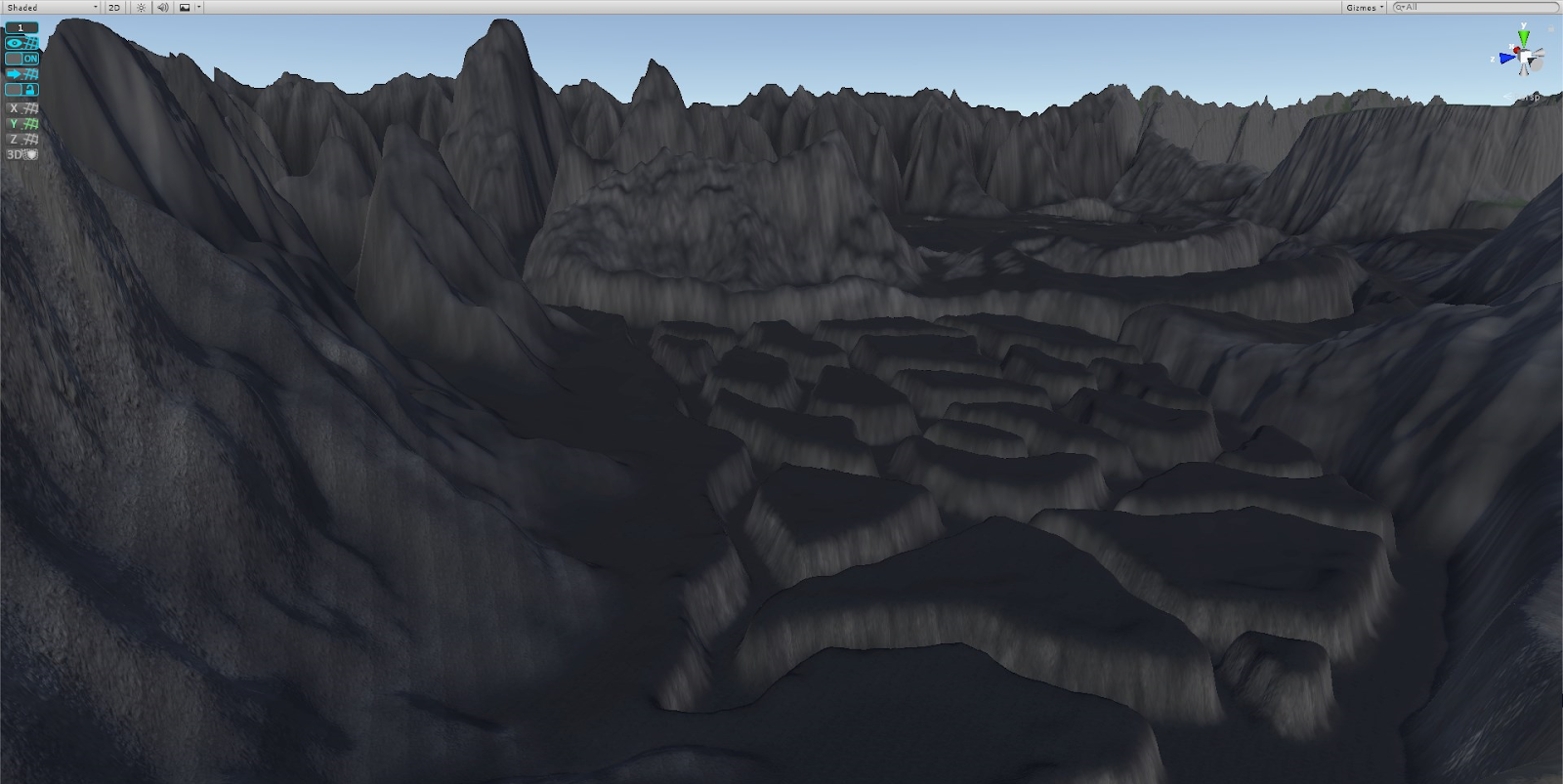 At this point, I just did lots of tweaking with the terrain and added in some texture for the bottom of the craters and fissure.  It looks pretty nice as it is, but when everything is done it should glow and look super cool. 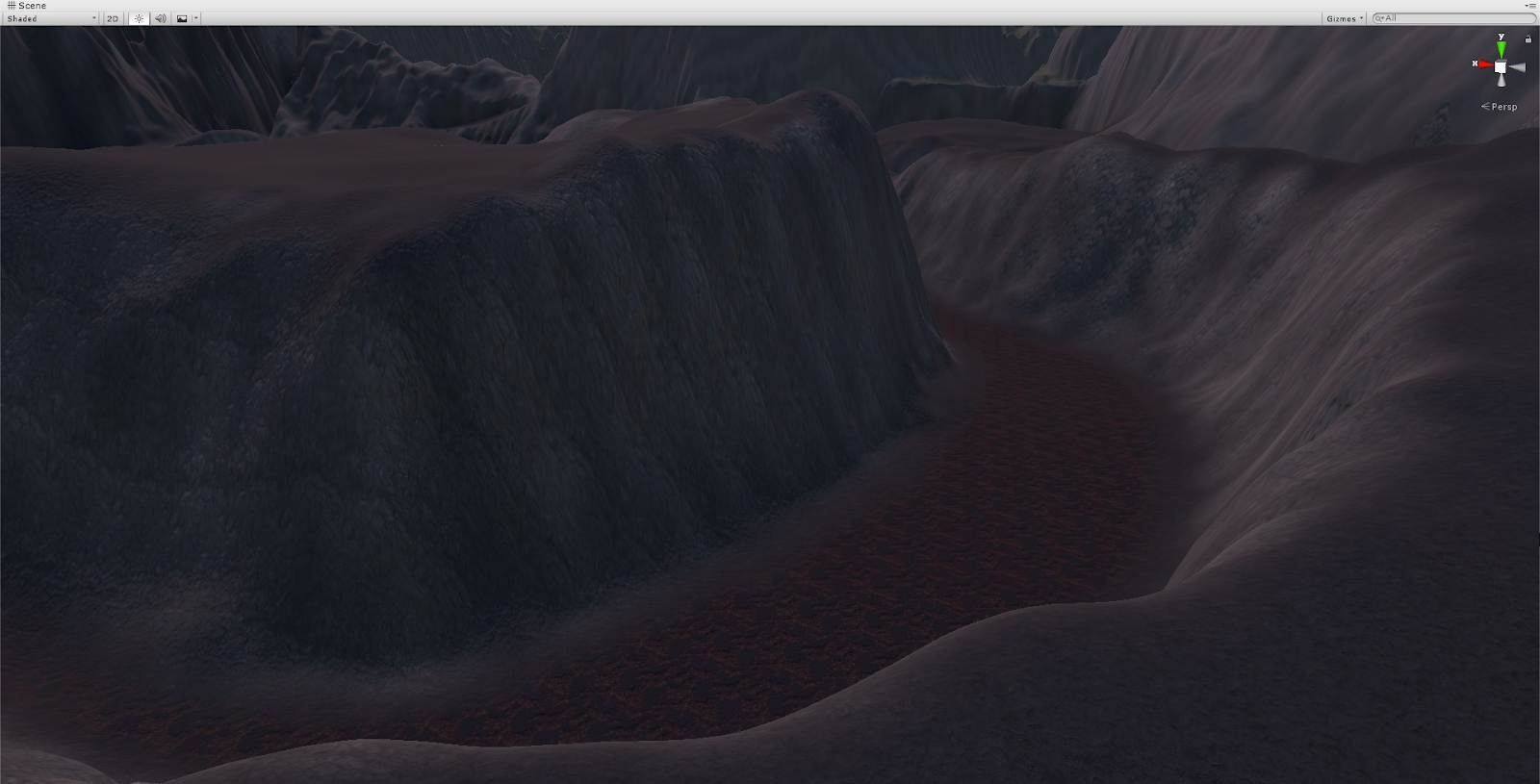 Now that the majority of the terrain work is done in this volcanic biome, it’s time for me to start greyboxing environment objects and buildings for the zone! I’ll be posting updates more frequently here.