Skip navigation
We use cookies to improve your experience using this site. More information
Become a patron
Apr 2, 2020 at 3:37 AM
Press Release: Better Living through Alchemy by Evan J. Peterson

Broken Eye Books is publishing the serial novel Better Living through Alchemy by Evan J. Peterson, a fabulist mystery exploring the boundaries of science and magic.

Kelly Mun operates Non-Linear Investigations out of a small office in misty, steam-heated Seattle. Using esoteric techniques taken from Dadaism as much as from occultism, Kelly makes the connections others ignore. When a young woman dies under impossible circumstances at a crowded show, Kelly is hired by a mysterious businesswoman to find out all she can about a new recreational drug that may have been involved. Kelly will have to face down monsters, but that's just business. In this parallel Seattle, monsters can be allies and lovers, and they're not the scariest things lurking in the shadows.

"Better Living through Alchemy comes from several points of inspiration," says Peterson. "My curiosity around the merger of magic and science, my fascination with the work of William Burroughs and David Cronenberg and their slippery, queer genres and social satire. I also wanted to add more diversity and dignity to such stories, especially for the femme and POC characters. This is a story about in-betweens—hyphenated reality—the people and forces at the gateways. What starts as a mystery gets weirder chapter by chapter. Occultism, drugs, and queer noir are just the beginning." 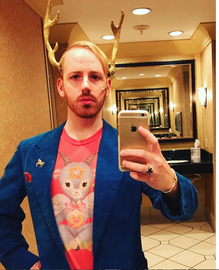