EDIT 30 August 2020: I have added a photo and some more thoughts on true edge/false edge. Find it close to the end of this post.

In this post I give a brief overview of the subtle means used by early medieval sword hilt makers to address specific ergonomic requirements. First off, it is apparent that symmetry was the aesthetic ideal for shaping medieval swords in general, other than with sabres, for example. As the gripping hand is not at all symmetrical, a perfectly symmetrical handle is suboptimal in terms of ergonomics. Thus we are looking at a dilemma, where the aesthetic ideal is opposed to functionality.

Over the years, I have observed a number of recurring irregularities, such as the occurence of slightly twisted pommels on the majority of single-handed, irrespective of period (special thanks to Mikkel Mønsted for pointing me to the observations made by Nils Anderssen).

Of course, with archaeological artefacts, one can hardly rule out later deformation. However, a twist of a pommel that was originally mounted straight would affect the tang, too. I have not noticed any twisted tangs, though. Secondly, if such twists were accidental, one would expect a more or less even distribution of clockwise and counter-clockwise twists. Again, this is not the case. The majority of twists is counter-clockwise, ranging between 2°–7°.

Inaccuracy of manual labour on a high status weapon is extremely unlikely, given the astounding craftsmanship that went into their making. Plus, there would have been means to fix pommel position if required, for example, with small iron shems as seen below on a Viking sword fragment from Snåttsta, Markim, Uppland, Sweden, inventory no. SHM 16798.

So if these deviations were indeed intentional, they must have had a meaning. One possible explanation is improvement of ergonomics:

When extending a sword forward, the muscle at the base of the thumb presses against the top end of a pommel while the smaller fingers pull the other side towards the palm. This results in a subtle turn of the pommel, and thus of the complete sword. If the pommel was mounted parallel to the blade, that is in the cutting plane, edge alignment would be affected negatively. A sword-fighter would have to counter the twist by an according turn of his wrist. In order to avoid this, the pommel could be twisted to begin with. Now edge alignment is correct from the start.

This modification determines handedness: A counter-clockwise pommel twist on a single-handed sword optimises it for right-handed use. A clockwise twist renders it a sinistral sword. Which would explain why there are so many more counter-clockwise turns.

Not all pommels are twisted. If the original design already creates sufficient space for the thumb muscle, there is no need for it. This is true for very flat pommels, or those types that are of a linseed or canoe-shaped cross section (seen from above or below), occasionally in combination with a quite massive spherical central lobe (like on Petersen types S, R & Z). See, for example, the fittings of the sword from Żydowo (type Z), kept at the National Museum Szczecin, Poland (Special thanks to Dr Anna Bogumiła Kowalska for her generous support).

The fact that those swords, which do not sport a pommel twist can be extended forward without any undesired effect on edge alignment has to be considered supporting evidence for the above hypothesis, as Dr Alfred Geibig pointed out in personal communication.

However, even these hilts do show aberrations from symmetry. As it seems, there is yet another aspect in terms of ergonomics that is being addressed: When holding any tool or weapon in what we could call an extended pistol grip, the thumb lies on one side of the handle, and the remaining four fingers on the other. A kind of grip that is quite universal and is still used in sports fencing (see below).

Apparently, the thumb requires less space than the four fingers which come to rest on the opposing side of the handle. We could thus speak of a thumb side and a finger side. Probably in order to create more room for the four fingers and provide them with a sufficiently long support, many early medieval pommels are moved out of the central axis (seen from the front), thereby creating a longer and a shorter end of the upper guard (or pommel plate) on either side of the tang.

Surviving pommels on broken tangs are particularly telling, See the stub of the tang sitting in an accurately shaped rectangular cavity on the bottom side of this beautifully crafted Saxon pommel form the inventory of the British Museum (found at Royal Oak Farm, Beckley, Oxfordshire, England, UK, museum number1994,0407.1 – special thanks to Bob Davies for pointing me there).

Originally, this pommel was sitting on the tang both twisted as well as shifted to one side. So here we see both strategies at work. Note also that the decoration, which is basically of a symmetrical design, is not oriented towards the geometric center of the pommel bottom, but runs towards the conjunction with the off-center tang. This means that the customisation was planned all along, so as early as the wax model for casting the pommel was carved.

Another example of a pommel that shows both a twist and a shift comes from a Petersen type O/Geibig combination type 9 sword fragment from Anglia, Schleswig-Holstein, Germany, now kept at the Museum for Archaeology Castle Gottorf in Schleswig (Special thanks to Dr Volker Hilberg for his kind support).

This pommel was orginally sitting on the tang with a clockwise turn (seen from above) which would have rendered the weapon a left-handed sword.

The above image simulates alignment of the pommel when the original sword was being extended forward.

Shifted pommels can also be observed on these Petersen type V swords. The first two swords come from near Hedeby: 1. Boel (after Müller-Wille 1977), 2. Hedeby chamber grave 62 (after Arents/Eisenschmidt 2010). They are both on public display in the Viking Museum Haithabu. Note how particularly on the sword from Boel the decoration is oriented towards the grip terminal, not towards the upper guard's center.

The third sword comes from Gnezdovo, Russia (after Kainov 2012), and looks more symmetrical at first glance, even though the pommel is slightly shifted to one side, too. However, the cross-guard is shifted, as well, making for a more harmonious impression. Note that the organic handle which left a mark on the upper guard's bottom side would have increased the deviation, as it is moved even further out of the center.

In the graphics, the longer finger side is marked in blue, the thumb side in red. Note that with these examples, the tang sits in the blade's central axis. This is not the case with the specimens seen below.

Sword 'Ab' from the Hedeby boat chamber grave (after Müller-Wille 1976), a Petersen type K/Geibig combination type 6, quite obviously sports a longer and a shorter end of its upper guard on either side of the tang . However, the divergence does not affect the impression of symmetry as much as one would expect. This is because the top end of the tang runs out of the central axis, thereby moving the connection point between pommel and tang, countering the offset, yet at the same time maintaining a pronounced finger side and a thumb side. (Special thanks to Dr Sven Kalmring for his kind help and support.)

The same is true for the tang of a variant of Petersen's type L/ Geibig combination type 7 from Hedeby Harbour (after Geibig 1999). This type of sword never sported a pommel cap. The upper guard is shaped in such a fashion that one end is deliberately made longer than the other. This is even more pronounced on a sword of the same type, also found at Hedeby harbour.

So it seems that a number of technical modifications were used to improve ergonomics of the early medieval sword, and it will be the goal of future studies to increase the data base, and, if possible, assign specific modifications to specific types of swords, if the above ideas can be validated.

Note that by defining a thumb side and a finger side, the long edge (true edge) and short edge (false edge) of a sword are predetermined, too. So we would have to expect asymmetrical wear on both hilt fittings and edges. The former is in line with observations made by Sue Brunning who noticed recurring wear marks on early medieval sword hilts (see a video of mine addressing these wear marks). In regards to edges, it will probably prove difficult to take according measurements, as these finest part on a blade are attacked by corrosion first.

However, if we assume that one edge had to be re-sharpened an honed more often than the other, than the gradual loss of material might would ultimately render one edge thinner (and less wide) than the other, at least in places. This may show in different levels of corrosion.

I have not personally examined this type H sword from Norra Kvinneby, Stenåsa, Öland, Sweden (SHM 16646). However, the photo is suitable to explain what we could look at to identify long/short edge (also known as true/false edge): By the way the fittings are shaped and mounted, one side of the hilt offers more space between lower and upper guard than the other. So here we see finger side and thumb side, and thus long edge and true edge respectively. It is intriguing that with this relatively well preserved Viking sword, the one edge that could be defined as the long edge due to hilt design is more worn out than the back edge (or short edge).

It is worth noting that Arthur von Eschen noticed a tiny yet consistent difference in blade edge thickness on a 10th century INGELRI sword kept at the storages of the Swiss National Museum Zürich (special thanks to Dr Erika Hebeisen and Adrian Baschung for their kind support). See an according video sequence here.

Thank you for your interest and support.

Thrust-Punch with a Viking Age Sword

The SININIS Sword – Design & Ergonomics of a 10th Century Original

Revised & Extended Video: How To Hold A Viking Sword!

Ergonomics of the Sword Hilt from Starigard

P.S.: You may care to note that the title image is available at a high resolution to $7+ patrons.

P.P.S.: So what about longswords? some may ask. Well, I have not looked into it, as longswords are not my focus of research. However, maybe this famous image by Albrecht Dürer will inspire and stimulate according research with some longsword enthusiast? There is a twisted pommel right there! (See a larger version here.) 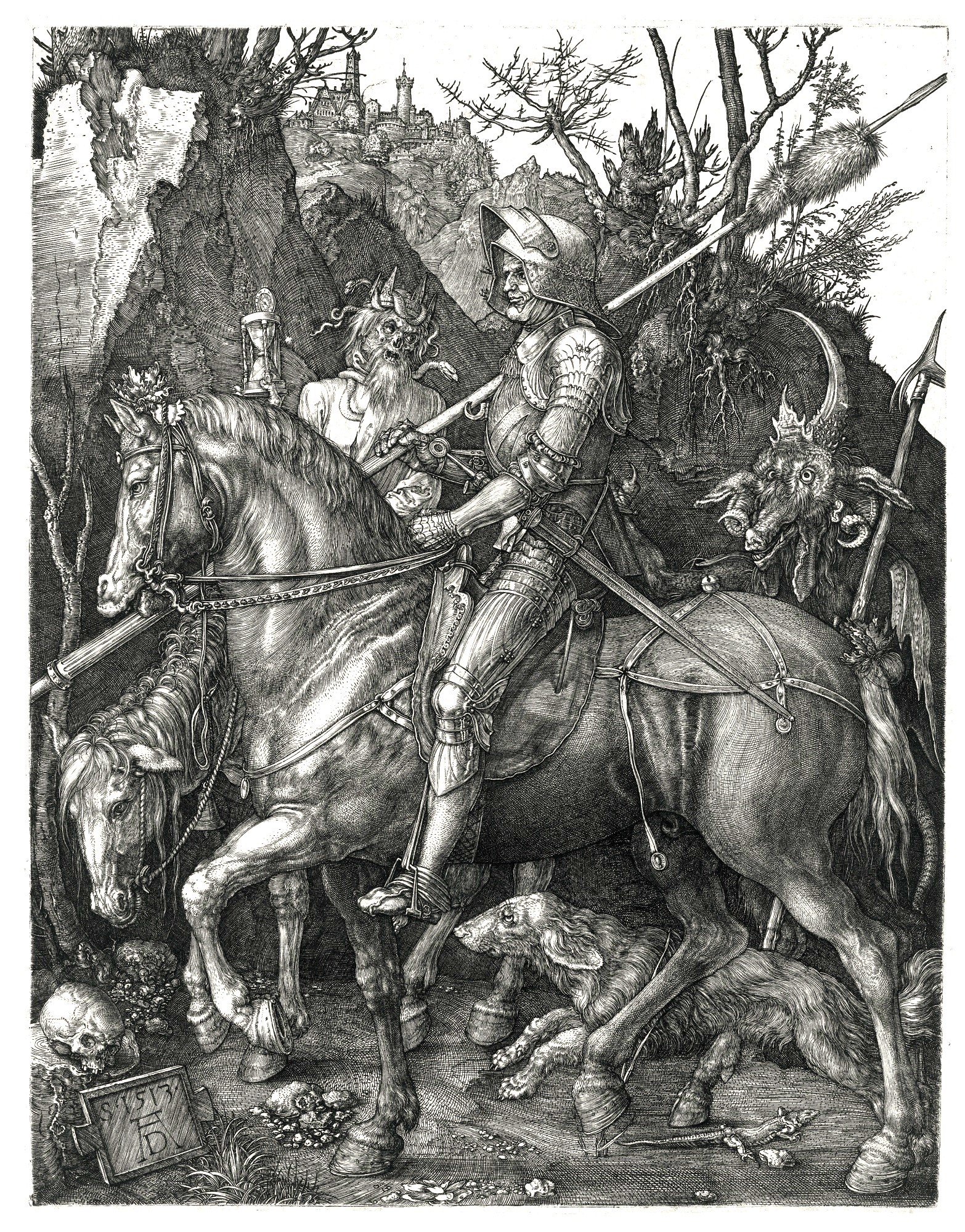