Skip navigation
We use cookies to improve your experience using this site. More information
Become a patron
Sep 1, 2020 at 10:06 PM
Neon Reliquary by Orrin Grey

Broken Eye Books is publishing Orrin Grey’s cyberpunk horror novel Neon Reliquary as a serial on Eyedolon. Each part will be linked below as they are published.

You are Soma Caldwell, an operative for Eidolon, the corporation that is the only employer, the only government, the only law in a city where the sun never shines, surrounded by an endless expanse of darkness that is peopled by unstoppable monsters. It's been this way for as long as you can remember. For as long as anyone can remember. The city is a perfect machine, and you're the implement that helps keep it running smoothly.

Now though, your employers have asked you to do something you've never done. You have to go into the Cauldron, that blighted spot in the center of the city where some forgotten disaster reduced the surrounding metropolis to ruin, and bring back an asset that may not want to return. It will be dangerous of course. The Cauldron is cut off from the tide—the endless sea of information that laps always at your brain—and home to strange creatures that will kill you if they can.

There are more dangers waiting for you than just the Cauldron though. Answers to questions you didn't even know you had, that will change what you think you know about the city, about Eidolon, and about the world in which you live. It will take all your skill to survive, but even if you do, what will be left for you when you return?

“Like a lot of people my age,” says Orrin, “I came up on cyberpunk. Stuff like Shadowrun and Akira and William Gibson's Neuromancer, sure, but also junk food like Albert Pyun's Nemesis, the Rutger Hauer monster flick Split Second, or even the inexplicable Double Dragon movie. So when Broken Eye Books approached me to see ‘what a cyberpunk story from Orrin Grey would look like,' I didn't run the other way as was my first instinct.

“Here's the thing, my fiction, as a rule, looks backward rather than forward. Horror, as a genre, is often fixated with how the past is not dead, how it continues to haunt us, and my work is no exception. I tend toward the antiquarian rather than the science fictional. Yet as I said, I came up on cyberpunk, and it has always been the 'punk' part of that portmanteau that appealed most to me.

“So what would a cyberpunk story by Orrin Grey look like? It would draw from the anime I watched in high school but touched with an occult bent. Things like Doomed Megalopolis or the Shin Megami Tensei games. Survival horror video games where the fog closes in to form permeable rooms occupied by half-glimpsed, misshapen forms. The films of Guillermo del Toro and the everlasting dark of William Hope Hodgson's Nightland. Under and over and around all that though, it would also be something else—deeply suspicious of capitalism, imperialism, fascism, and rich old white guys, as all good cyberpunk should be.” 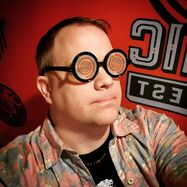 Orrin Grey is a skeleton who likes monsters and the author of a lot of spooky books, most recently Guignol & Other Sardonic Tales from Word Horde. His stories of monsters, ghosts, and sometimes the ghosts of monsters have appeared in dozens of anthologies, including Ellen Datlow's Best Horror of the Year. He writes for tabletop gaming companies, true crime websites, and many more, with bylines at Signal Horizon, Unwinnable, The Pitch, The Lineup, and others. You can find him online at orringrey.com.