I mentioned earlier that I'd been roped into LOWREZJAM this year and have been wanting to give you lovely Patreon peoples a sneak peek at some WIP stuff. I'll probably make this post public towards the end of the jam.

I'd initially decided to not to participate, but when my friend Nemoder had said that he needed an artist for a space combat/trading/exploration game he had in mind, I changed my mind. It's the first time in a long time that I've been mostly The Artist rather mostly The Programmer, and that's turned out to be a refreshing change.

We've gotten a bunch of stuff done over the past week. Here's a big dump that covers our planet generator (builds attached!), combat, some UI mock-ups and character studies for some of the alien races we might see in the game.

The idea was to take four horizontally tiling layers (surface, continents, polar caps and clouds) and shifts them at varying rates (for parallax) beneath a circular mask and shadow. Even though there's nospherical distortion present, it's still pretty convincing!

Attached to this post are Linux, Mac and Windows builds of our planet generator (Mac users will need to double click the planet_gen.command file).

Click or press Enter to generate a new randomised planet.

Here's a look at the combined layer stacks for each of the 4 default planets that are included in this build: an earth-like planet, a mars-like planet, jupiter-like planet, and moon-like planet (yes, I know the moon isn't a planet - this is a planet that looks like our moon). 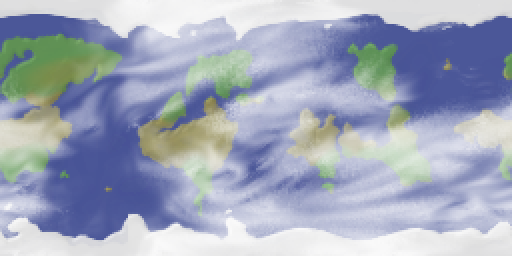 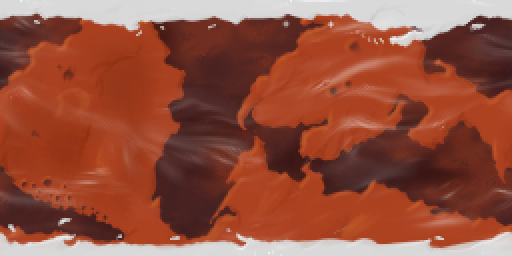 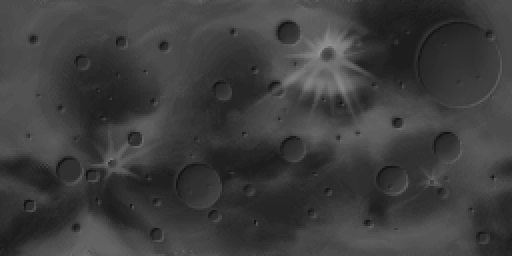 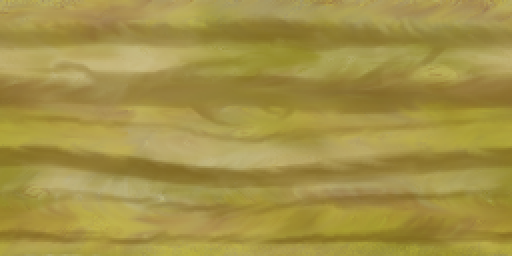 Nemoder did most of the coding here. It's been super nice to see my art come to life without seeing the iterative broken-ness that software development shows you (I love seeing that stuff too, but it's rare for me to have an experience where I just plug my stuff in and it comes out awesome first time thanks to someone else's work!).

Some of the combinations don't work as well as others. Down the track we might want to look at preventing some specific things from occurring, but for now, cheese planets and crater marks on the surface of a water world are cool right?

If you make/find a neat planet, take a screenshot and show me! :D

One of the first things we focused on was combat. We haven't worked on getting distributable builds of what we have so far, but if anybody's feeling intrepid, we've quietly popped our codebase up on GitHub.

Here's a look at one of Nemoder's sketches whist explaining the combat mechanics he wanted to explore and a screenshot from the game as it is right now (there are also cool explosions that I wasn't fast enough to capture). 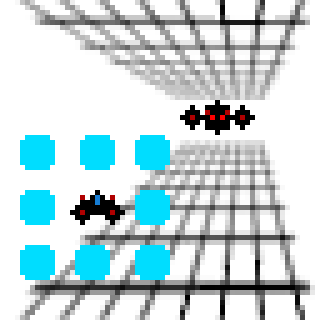 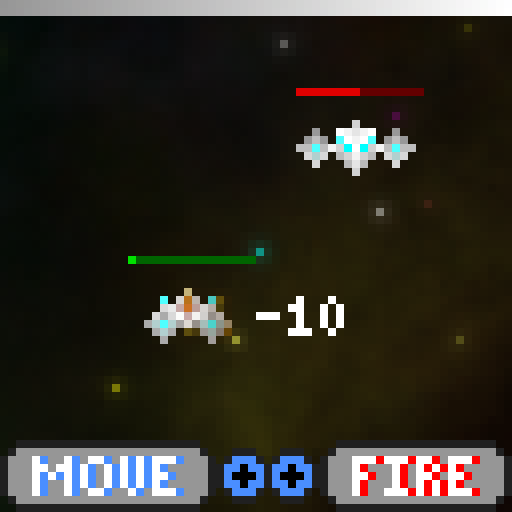 And here's a look at some of the visual refinement we went through along the way.

The movement/targeting buttons haven't really changed much over time, but there's a bunch more UI we need to expose to the player so that they can get stuff done and know where they're at.

Here's a look at what the interaction that leads up to a combat encounter might look like (in my mind, this is an alien with a tall head and protruding eyes that's wearing a space suit - we'll see more of it later).

We haven't started to mess with any menus or status screens yet, but here's a look at some mockups of what it might be like to drill down into the cargo menus. 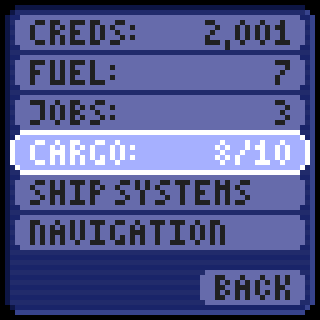 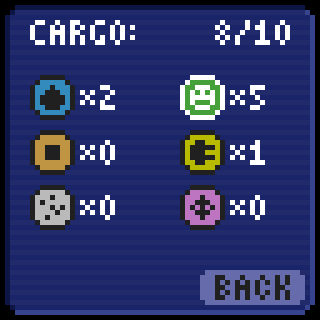 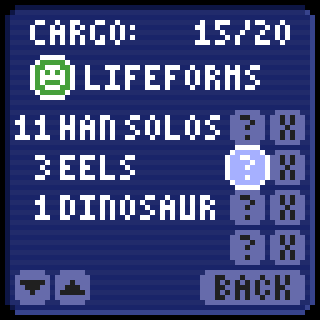 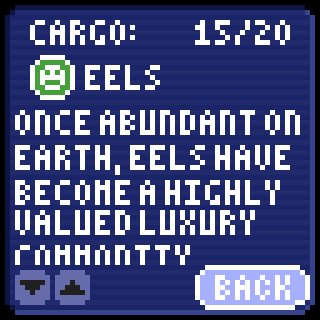 Working out the plot and setting for the game has been a fun exercise. Nemoder's drawing inspiration from Star Control 2, but I've never played it (technically I played it for about 5 minutes while waiting for a friend to get ready once many years ago, but I only saw combat and had no idea what I was doing).

Many of the ideas I've come up with have apparently reflected a lot of the decisions that the Star Control 2 developers made. We're unsure where to ride the line, but for now, I'm taking that as an indication that "great minds think alike".

We've settled on three primary alien races (in the game's setting, humans are scattered space nomads, typically finding work as mercenaries and are seen by the rest of galactic society to be individualistic and materialistic). They are the Plink, the Sneeb and the Krull.

Here's a look at a rough map showing each race's territory. 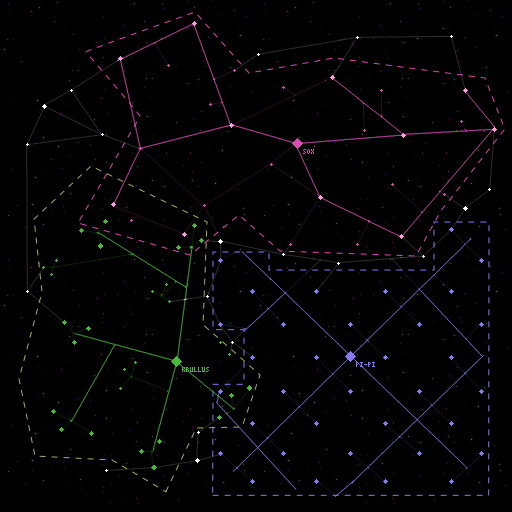 The Plink, who originate from the planet Pi-Pi are pattern oriented, seeking algorithms in life and the universe. They're orderly and neat, but often neurotic and easily frustrated when things don't behave as expected.

The Krull hail from Krullus and are a solid, robust race. They tend to be focused and single minded once a task is set, to the point where they're often oblivious of anything going on around them.

The Sneeb of Sox are elegant, slow and thoughtful. Their desire for deliberateness often makes them seem indecisive - something compounded by their propensity toward getting distracted.

What these races might look like are still up in the air, but I did a couple of character studies to help explore some ideas. Right now, I'm thinking we could be looking at a Plink and a Krull, but I'm undecided. 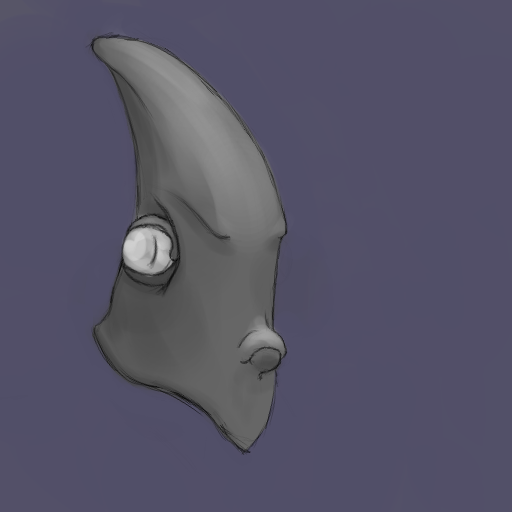 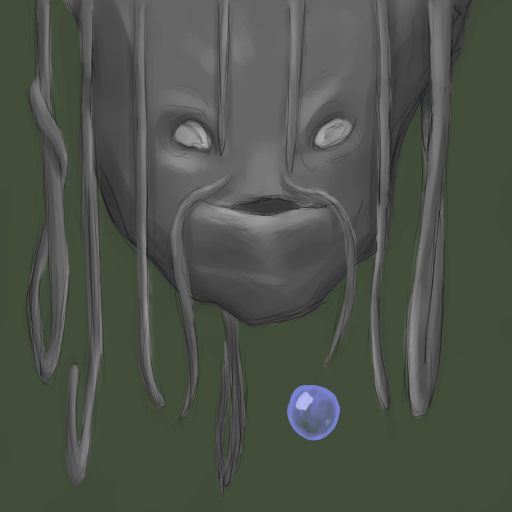 I've never done this kind of portraiture/character work before (I'm terrible at faces and avoid them as often as I can!), but these have been an enormous pleasure to work on.

I also felt motivated to sketch up this homage to a game I have a lot of feelings for. I'm thinking of including this awesome space chicken man as an easter egg. Perhaps you might spot him in a remote system and stop to have a chat about hipsters. 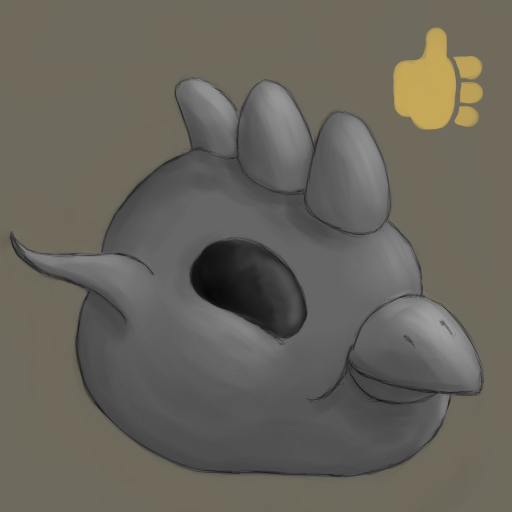 And that's it for today! Hope you enjoyed this little art dump and the planet generator! :D