One economic phenomenon has characterized the last four decades in OECD economies: the housing bubble. The mother of them all was undoubtedly Ireland, where house prices quadrupled in real terms between 1975 and the Global Financial Crisis (GFC) in 2008, and prices are still 3 times as high today as in 1975 (see Figure 1). But the most enduring housing bubbles have been the Australian and Canadian ones. While Japan's bubble burst in 1990, never to recover, and the USA, UK, Spanish and Irish markets slumped after the GFC, Australia's and Canada's sailed through the GFC almost unabated. 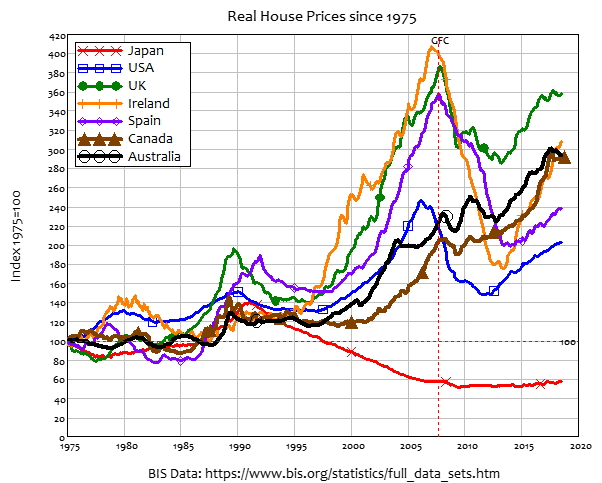 Australia's success in avoiding a house price crash at the time of the GFC, and avoiding a recession as well (to clock up the longest period without a recession ever recorded) led to a smugness that "Australia was different". Local authorities, including the Reserve Bank of Australia, relabelled the GFC as the NAFC: the "North Atlantic Financial Crisis".

So how did Australia and Canada do it? That is still a mystery in Canada's case, but we now know the answer in Australia's: widespread fraud by the banking sector.

At the behest of the banks themselves, the Australian Parliament established a "Royal Commission into Misconduct in the Banking, Superannuation and Financial Services Industry", which has just concluded after a year of hearings. Given that the objective the banks had in calling for a Royal Commission was to silence their critics once and for all, the Royal Commission has been an abject failure. Despite deliberately limited time, resources, and terms of reference, the banks were put to the torch by a determined Commissioner and the investigative counsel assisting him. Unsubstantiated allegations by whistleblowers have been replaced by an impressive document trail, and damning evidence under oath from banking executives.

The Royal Commission uncovered numerous instances of fraud, from charges for financial advice to dead people at one extreme, to pressure-selling of funeral insurance to young indigenous people at the other. But the fraud that undoubtedly did most to sustain the housing bubble was the pretense that borrowers were only spending just above the official poverty line, and therefore could devote their net income above a poverty level of expenditure to servicing their mortgages.

One bank document uncovered by the Royal Commission assumed that a childless couple earning the truly princely sum of A$400,000 before tax, and therefore having an after tax income of about A$20,000 (roughly US$15,000) a month, were spending a mere one fifth of their net income, and therefore could devote 80% of it (A$16,000 a month) to service a mortgage. Should they be breeders, nine kids would add a mere A$2500 a month to their expenditure: raising a child is clearly a bargain in Australia, at under US$7 per child per day all up (see Figure 2).

In reality, actual expenditures are multiples of these fantasy levels (the  Australian Institute of Family Studies estimated the minimum cost for raising a child at $140 a week, 15 times the level used in this bank document), and the money households were assumed to have spare to service huge mortgages simply wasn't there. The only way out of the debt trap this put Australian households in was to sell on a rising market.

The banks helped keep those house prices rising by also aggressively marketing what they described as "interest only" home loans. In reality, these gave a 5-year holiday from principal repayments, after which principal had to be paid down to zero over the last 20 years of a 25 year loan. Monthly payments could increase by as much as 40% when the "interest only" period ended, but banks and borrowers assumed that would never be a problem, because by then the house would have been sold for a profit on that rising market. At their peak, "interest only" loans accounted for fully 40% of new mortgages, many of them given to households who were assumed to be able to devote more than 50% of their net income to paying the interest on truly jumbo-sized loans. 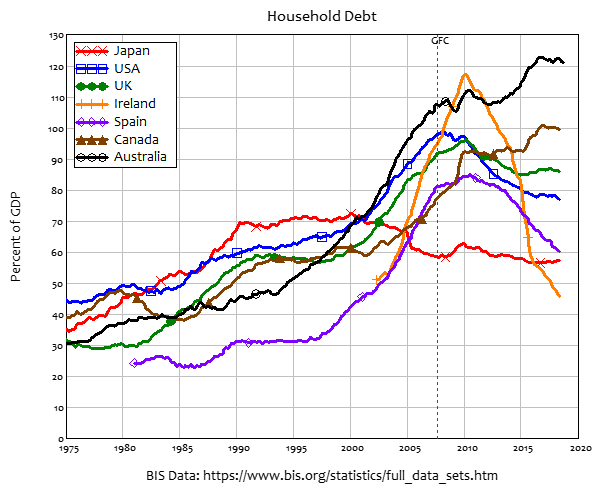 Both those pretenses have collapsed thanks to the Royal Commission. Banks are now applying responsible lending criteria—or at least responsible in comparison to what they had been doing. "Interest-only" loans have almost ceased to exist, while mortgage brokers are actually looking at would-be borrower's expenditure, rather than using the mythical "Household Expenditure Model" (HEM) which pretends that raising a child in Sydney costs a mere US$7 a day. 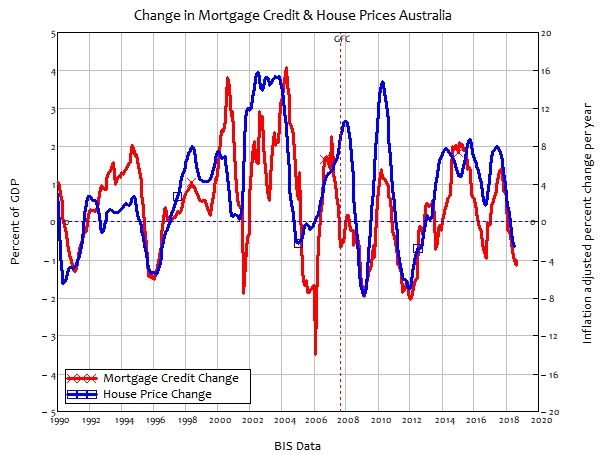 The secret to Australia's long-running housing bubble was to simply keep mortgage credit rising for longer. The annual increase in mortgage credit since 1990 averaged 0.4% of GDP per year in Australia, versus 0.1% in the USA. 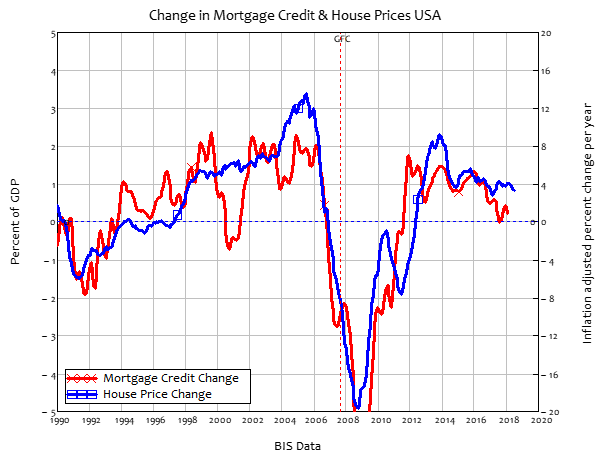 After the Royal Commission, the days of rising mortgage credit are over. Australia's once-smug commentariat has given up on hoping that the bubble will return, and is now reduced to hoping that plummeting house prices won't trigger a recession. Succour is taken in the fact that unemployment has been trending down: so long as employment remains high, goes the refrain, households can continue to service those mortgages, and there won't be a precipitous collapse in either house prices or the economy.

Good luck with that. The same comforting thoughts were common in the USA too, before the proverbial truly hit the fan.